The much anticipated second LP from those ferocious francophiles Les BOF! has finally arrived, following a break of no less than 8 years. I for one was delighted to hear that news, and being an Edinburgh resident, I’ve been lucky enough to see them play live locally more than a few times over the last couple of years, and of course headline at last year’s Beatwave away down in sunny Hastings

Voila! serves up a selection of raw ‘60s beat and garage that is as fine and as pungent as an expensive Fromargerie. There’s a balance of well chosen covers and originals. The opening track is a cover of a much loved rock and roll standard. ‘If ever the Devil’s plan was made to torment men...’, Monsieur Mombel vocally expresses his disdain, it certainly sounds more angry and passionate sung in French. I can almost see him stamping his foot, tossing his head, chin jutting out - he leaves the listener in no doubt that it was indeed you, 'Jezebel' (run for the hills my dear!). 'Vie De Chien' is definitely my bag (haha) with it’s to-die-for ‘66 fuzzed-out riffage, as is 'Leberes Moi'. Standouts of the originals are 'Fin Du Monde', 'Drogue & Roll' - not only because it features a Vibraphone and Stylophone, it’s also deliciously Dutronc and a bit genius; and lastly short but sweet instro 'Port St. Louis'.

The overall mood is stylish, aloof, smart and very dance-able, all of which encapsulate that distinct Ravencraig Studios magic - the recording has clarity, and the equipment that is, without a doubt utilised here, produces a sound that (no matter what anyone else says) cannot be reproduced using digital equipment. It’s both warm and sharp, authentic, and it’s the NOW sound!! Should you purchase this LP? Yé-Yé!

Voila! is available from bandcamp via Dirty Water Records here.

Have you always wondered how all of those wonderful rock 'n' roll, garage and beat bands came to play in Edinburgh over the last few decades? Well, you can almost bet with certainty that this guy has had something to do with it. And, not only that, he's also a member of some of the best loved beat combos around. Think The Thanes, Les BOF!, Preston Pfanz and The Seaton Sands, The Sensation Seekers, and for the Franklin Fest 2016 - The Gastronauts and The Nettles... I caught up with musician, promoter, beat stalwart Angus McPake, on the eve of this year's Franklin Fest.

Debbie: Could you tell us a wee bit about your involvement in promoting bands?

Both Cal (Calvin Burt - also co-founder of the Franklin R'n'R Club, drummer of The No-Things, Carbona Not Glue) and I have been promoting bands for 25 plus years. For me it was just a natural extension of being an active musician. By the early nineties I had been involved in not just putting on local bands but international artists including Nico, Nick Harvey, Sonic Youth and Primal Scream. Sadly I became disillusioned as this often resulted in little income and regularly having to deal with over-inflated egos - where's the fun in that? As I bowed out for a few years Cal had started being very active in promotion - firstly at Basin Street in Haymarket and later at The Cas Rock where he regularly had bands like Thee Headcoats and The Kaisers playing.

Debbie: ...and how did the Franklin R'n'R Club evolve?

The Franklin R'n'R Club came about on my part by circumstances which could be seen as less than fortunate for Cal. He was running a bar called The Parlour on Duke St. and had been plagued with noise complaints and council interference when trying to have bands playing in his pub. To placate the neighbours Cal promoted one gig in the nearby cricket club, a night which I attended. As soon as I saw the venue I immediately knew we were on to a winner! I suggested we got together and started using the pavilion (ha!) to put on the sort of music we both like - namely R'n'R but probably more specifically the garage punk variety. The cricket club had a rather down at heel and kitsch feel (as well as a very reasonably priced bar) which I felt would suit the music perfectly. I dug out an old valve PA and some vintage microphones and we were off. Our philosophy was not to put on bands on a monthly basis just for the sake of it but only to put on bands we really liked (hence we have the odd gap during the year). In the last 3 or 4 years we have had the privilege to welcome a wonderful array of some of the best garage bands in the world including The Masonics, MFC Chicken, Les Grys-Grys, Muck & The Mires, The Wildebeests and many more.

Debbie: Prior to the Franklin Fest 2015, had you organised these kind of events before?

To distract (our own) attention from a certain royal wedding in 2011 Tony 2-Eyes and myself had organised a small 2 day festival in Edinburgh called The Bottom Rung Festival. Headlined by Janie & The Ravemen and The Thanes (featuring a couple of members of the legendary Scottish 60s group The Poets) The whole weekend had gone without a hitch so in the back of my mind was the urge to do something similar again. The ever increasing popularity of the Franklin seemed an ideal platform to do just that.

So here we are about to embark on the second Franklin Fest with some trepidation! 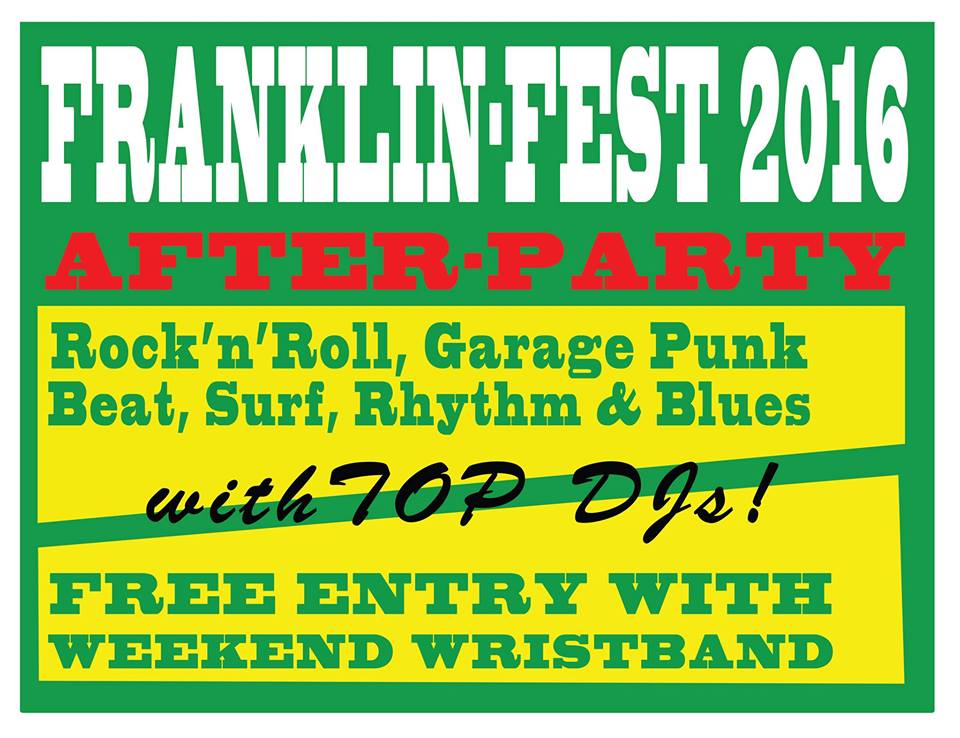 Debbie: How do you feel last year's event went down, and what can we expect this year?

Last years Franklin Fest was a brilliant weekend with an almost capacity attendance and amazing performances from all involved. 2015's festival mostly featured bands that had previously played at The Franklin - this year we are very excited to introduce some music which is not only going to be a first for most of the audience but also new to us. The Mindreaders are completely unknown quantity for starters - and with Sexton Ming at the helm anything could happen. The Embrooks too have only recently reformed and should be a real eye-opener for anyone who didn't see them 20 years ago. The Courettes, playing their first Scottish gig, have such a fine word of mouth reputation that I think we should be prepared to be utterly astounded. As an addition we are also having something I think was missing from last years event - an afterparty. As well as our resident jock Mr Tony 2-Eyes we are delighted to have Spencer Evoy, Carl Combover and Claire Hyslop behind the wheels of steel for your dancing pleasure until the small hours. A grand finale to what promises to be an superb weekend!

Muchos gratitude to Angus for taking the time out of his busy schedule to chat.

Friday 24th at The Cricket Club from 7pm:

Saturday 25th at The Cricket Club from 7pm:

It's not too late - Tickets are now available from tickets-scotland.com. There will be tickets available on the door for Friday and Saturday evenings for 20 per night, or £35 for a weekend wristband which will get you into both nights, Saturday afternoon and the after show party at Studio 24.