We kick off our second day at the festival by checking out José González on the Höjden stage. It’s unsurprising that the stage area is absolutely packed, given the fact that he’s one of Gothenburg’s own, and security shut it down within twenty minutes because it’s at full capacity. It’s a great, understated performance and a gentle start to ease us into the day ahead.

Arguably the best gig of the day happens at the Linné tent, where Kamasi Washington takes to the stage. It’s a brilliant set and Kamasi and his band are on top form, oozing musicality, as they crack through tracks from The Epic. With such superlative musicians on stage, it’s no surprise that the crowd is roaring by the time they’re halfway through the opening track. It’s a jazzy, bluesy, souly, funk-shake, shot through with African rhythms. We drink it up. Afterwards, we go from one epic performance to another. By the time Grace Jones makes her appearance, the skies have opened and the festival site’s slowly being transformed into a quagmire. We barely notice the rain when she takes the stage: skulking out wearing a black cloak and a gold skull headpiece with a crown of black feathers. On losing the cloak and putting on a golden headdress, we discover that she’s covered in tribal body paint. She is fierce, commanding and completely compelling.

When The Tallest Man On Earth takes the stage he is genuinely delighted to see such a huge crowd waiting, given the fact that we’re all in danger of being washed away by the rain. He’s as great a stage presence as ever without needing any gimmicks: the songs fly on their own. His most recent album Dark Bird is Home saw him embracing a full-band sound and these tracks, combined with reworked tracks from his earlier albums come across really well despite the fact that the band are playing borrowed instruments after their kit got lost on a plane. We love the new versions of 'Wind and Walls' and '1904' and 'The Wild Hunt', arranged for guitar, pedal steel and violin, is something really special. He abandons the band for some of the set, playing some earlier tracks in their original arrangements. 'Love is All' and 'The Gardner’ prove that Kristian Matsson is at his best with just his vocals and guitar.

Based on my previous experiences with The Libertines, where the gigs were either blisteringly good or cancelled, it’s 50/50 as to whether they’ll pull of their first performance in Sweden in twelve years. By the time they take the stage, it’s public knowledge that Pete wasn’t even in Sweden when they were due to play the day before. Now he’s here, but he’s pallid and woozy and looks like he’s just back from a date with Gazza, circa 2014. Things get off to a good start with 'The Delaney', mainly because it’s nostalgia in overdrive, as Pete and Carl appear on the stage in their scarlet guardsman jackets. Appearance-wise, it looks just like the old days. Performance-wise, it’s just like the old days too: pretty shambolic in parts with moments of brilliance where the band really gets it together and are on top form.  After a great start, the set goes awry and by the time they get to 'What Katie Did' the cracks really start to show. Carl’s been looking wary all through the set and there’s a moment where he seems to have to chivvy Pete along, Gary’s looking wary too while working overtime on the drums to keep the songs on track and John is getting the job done with aplomb but looks like he’s quietly fuming. At one point, Pete gets so frustrated that he throws his guitar into the crowd and his guitar tech has to scramble out to get it back. It’s a shame that, on some of the band’s best tracks like 'Can’t Stand Me Know', the guitars are all chord work and really scrappy. As the set nears its end, though, they really get it together. 'Vertigo', 'Death on the Stairs' and 'Time for Heroes' are absolutely smashing and show that The Libertines can still really deliver. The set rounds off with 'The Good Old Days', 'Up The Bracket' and 'Don’t Look Back into the Sun', and the crowd is delighted. Like previous Libertines gigs, the set is brilliant and frustrating in almost equal measure but still worth seeing. Carl and Pete still have great, fractious chemistry but they can’t hold the band together. It’s time we got over idolising the leading men and gave the Gary and John the credit they deserve for being the ones who work overtime to hold the band’s live performances together. It’s no wonder that Gary whips his top off and hops about the stage at the end of the set.

PJ Harvey’s headline slot is both austere and magnificent. She comes onstage flanked by men in grey suits, chanting, swathed in indigo and carrying a saxophone. We can’t take our eyes off her. She plays most of her most recent album, the monumental The Hope Six Demolition Project, some tracks from Let England Shake and it’s only after over an hour that the 90s classics get an airing. By the time the lights finally go out, we feel like we’ve just witnessed something monumental. 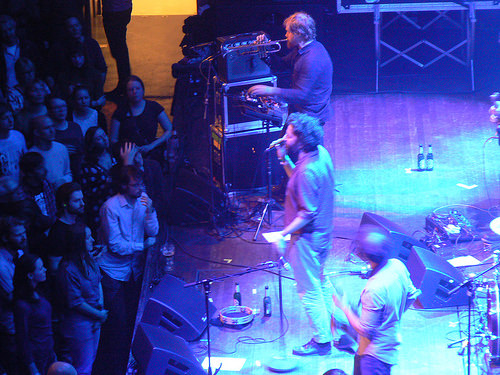 Trying to bring together the community and the festival, Le Guess Who? has come up with Le Feast. Le Feast basically means that some people in the city are cooking meals, and you can sign up and you will randomly be assigned a place to call home and have dinner for one evening. So we decided to have a go, ending up at a lovely place with four other people. The dinner was awesome, the companionship interesting and fun, and we as musos heads were the first to go because, well, Destroyer was on the slate at 19:30 already.

Now, Dutch people are early eaters, so the big room in Tivoli Vredenburg was pretty packed to see what one could perhaps dub as the headliner of this year’s festival. Coming off a strong album with Poison Season (of which he plays a sizeable amount), Dan Bejar and band manage to rub shoulders with pop whilst being decidedly not a pop band. The jazz and experimental influences are still paramount, but the rhythm lines make almost all easy to listen to and follow and, yes, even do a little dance to on occasion. The drummer is certainly working hard for his money to have that part in A-Okay condition.

Dan Bejar is a frontman whose introverted presence actually makes the show. Uneasily he croons his heartfelt ruminations on life and the city, and when he isn’t singing he is kneeling down on the stage. When he is singing, he uses a half-sized mic standard to lean on as if the support is needed to keep him from fainting to the floor. In some songs his phrases run delightfully long, which highlights the way he times the words. A song like ‘Poor In Love’, which he plays midway through the set, is a nice example of why he is on top of his game here. At one point the kick drum comes in, Bejar starts a line as long as anything in Oscar Wilde, and the horns can be heard floating airily in the back to juxtapose the drums. Destroyer delivers quality, and shows what a band in strength can do.

After getting a few songs in of Magma and Ringo Deathstarr (which you can read about elsewhere), it is time to get experimental with Keiji Haino. The Japanese artist takes on drums, pots and pans, and after the concert the people next to me are saying how it was a beautiful mixture of contemporary classical music and percussion. Though I’d hesitate to call it beautiful, and I’d hesitate to advise it to anyone who is just in the market to hear some good music, I would say it is interesting to see Haino go at it. With cymbals and a table full of pots he is determined to control the soundwaves. And dear lord, he might just have managed that.

There’s an instrument in the band The Juan MacLean — and people have told me over and over the name but I keep forgetting — which he turns on, and if he puts his hand in front of it, it creates sounds. That always blows my mind, and this is what Haino’s performance reminds me of. Hit a thing, then move your hand over it, push the soundwaves away, to the side, or up, or whatever, and it alters the sound we, as the audience hear. Hit the cymbal, move the cymbal (in a sort of contemporary dance way), and we hear a different kind of sound than if you would’ve kept it stagnant. Beautiful, no, is it interesting if you find the question “how does sound work?” interesting, yes, quite, I reckon.

Shabazz Palaces are playing up, up and up in Cloud Nine, where they are showing off their hip-hop skills with some flair for show. Hand percussion, glitter and rapping all combine for a performance that manages to work. The great thing is that I see some people dancing on the quick hitting hip-hop sounds, but others on the lush, more soul-like sounds that run underneath it. The live percussion and the enthusiastic rapping give it an interesting live aspect as well, and the extremely diverse public out there all seem to be able to find something to enjoy that makes them stay until the end. Definitely worth checking out next time they’re in town.

Kamasi Washington is ready to take over as the night turns to midnight with his jazz & funk outfit. They get the old school going with the two drums, the upright bass, the keys, the horns (including, obviously, Kamasi himself), and the female vocalist who, when not singing, is being seemingly enthralled by what the rest are playing 24/7 and dancing and looking like those ladies did in those bands back then (as if on a high, musically, of course). So the band definitely has the looks spot on, just oozing out that they are going to funk the place up as soon as the green light says go and they can get it all going down.

And what ensues is just that. Tight, making sure they look the part, and they make sure the word of Jazz gets out there. It is like being transported to an old Jazz cafe way back when with some people who are there and just get up to have some fun. Apparently they have quite the live reputation, and certainly that is well deserved, giving everyone there (and the crowd did come in for this one) a good look at a more funk side of Jazz with loads of rhythm next to the experimental sounds and the expert saxophone playing of Kamasi himself. Certainly one heck of a way to close out the big room at Tivoli for the Saturday night.