The first track to be released from the new LP is ‘It’s Tomorrow Now’. Opening with a chaotic looped squeal, the knockout punch of the frenzied opening riff and steady, driving drums sets the bar high for the nine tracks that are to follow.

The Melbourne quartet have spent the last year touring with label buuddies pinkshinyultrablast as well as Johnny Marr, Brian Jonestown Massacre and A Place To Bury Strangers, whilst singles Not Today and Running Late taken from their second EP, ROYGBIV garnered heavy attention on the radio waves worldwide.

Mindfullness is out this September via Club AC30, but in the meantime you can stream ‘It’s Tomorrow Now’ now below: 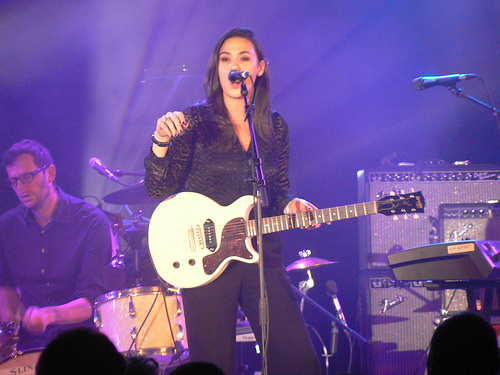 Having lost the will to stay out and see the final bands last night it seemed only fair to catch the early performers today. So, after a walk around the town and a pint in The Alex openers Fever Dream were checked out. The trio turned out to be excellent purveyors of good, fast shoegaze so this was definitely the right decision. Singer Adrian Fleet even owned up to having been born in Bognor and the fact that his Mum had at one time worked for Butlin's. A nice homecoming touch to an already rewarding performance.

Zyna Hel were on next door in the Skyline tent, bringing to mind Sarah Brightman fronting the likes of CHVRCHES or Daughter. They'd a decent line in beats but failed to engage me. Something more traditionally indie was required and Orange Yellow Red duly supplied that, along with an excursion into rumbling instrumental work over impassioned vocal samples. They've a nice line in jangly material, particularly on 'Time Slows Down' and a surprising number of spare guitars.

Back in the Skyline Glasgow's St. Deluxe were making a glorious noise, fusing all of the best parts of grunge together into a great racket that was well served by the sound desk but which should really have been experienced in a far more intimate setting. Still, they seemed to enjoy the amount of space afforded them by the stage and got stuck right in. Taking up more room on the main stage were the Band Of Holy Joy, a group who it seemed had chosen that name as an ironic moniker for their singer's dead pan delivery. Droning Puritanism as opposed to the fire & brimstone of John Knox Sex Club yesterday. They brought to mind a performance from over a decade ago by The Nectarine No. 9 and I wasn't impressed by them either.

The Monochrome Set are another of this weekend's longer in the tooth acts and so have a good solid fanbase in tow for their main stage performance. They're another band originating in the tail end of the Seventies that up until now I've only been aware of by name. Those who have known what to expect are clearly well served by the band but for me they lack any real oomph so I head off for more modern fare, albeit as it's Ghostpoet I've equally little acquaintance with his tunes.

He and his band are in full flight when I make it into the Red stage and the crowd are fully involved dancing and jumping about. There's a real Saturday night party atmosphere been created and the songs have a far greater urgency live than on record it seems. Ghostpoet himself is sweating cobbs as he bounds about the stage, whoping up the crowd and band alike. A fellow audience member is overheard comparing the show to the work of the Lost Poets and that's pretty fair. I need to give his albums another listen in a new light.

Back on the main stage Nadine Shah is a performer I'm more familiar with, albeit more from her time in Trans Global Underground (which wasn't exactly yesterday). I'm therefore not really expecting her to be weilding a guitar in a fairly standard rock and roll kind of way. Initial adjustments of perception made her set's one of great radiance, despite a recurring farty bass sound. Current album Fast Food gets a good work through and all round this is the sort of performance you'd expect from a strong act of Shah's calibre. One of the clear highlights of the three days.

Shah was though, by my reckoning, around about 30 minutes late hitting the stage. Public Service Broadcasting appear to have topped that by 15 minutes as I'm expecting them to be well into their alloted 90 minutes when I get back into Reds yet sound levels still seem to be getting tested and equipment plugged in. The downside of making use of a lot of techy stuff beside guitar, bass & drums maybe. The audience aren't phased though and greet the successful start of the show with a resounding cheer. Similar to the Ghostpoet set elements of the band's work that aren't readily obvious on their records come to the fore here, particularly the drumming and therefore the danceability of many songs.

The stage here isn't maybe quite large enough to give full rein to the projections they employ and the Sputnik-like model they have sticking out of the back wall ends up looking rather more Carry On than was probably intended but, for a bunch of guys looking like runners up in a Dr. Who impersonation contest, this is a seriously enjoyable show, not least for their Speak & Spell-like take on the fact they're playing Butlin's in Bognor.

The final act on the main stage tonight is another old hand whose earlier work is where my familiarity lies. Johnny Marr's done the guitarist-for-hire bit for a few years now but with the release of The Messenger and last year's Playland he's back taking centre stage as both singer and guitarist. The latter of those jobs is a sight that anyone with a love of top class guitar playing should make a point of seeing at least once, both in terms of ability and the way in which the instrument is dealt with as if it were a part of Marr himself. However, as with a couple of other performances I seem to be at odds with the bulk of the crowd as the kind of dad rock of 'New Town Velocity' and other songs saps my energy rather than leaving me wanting more. A trip back to see PSB finds them doing a slow number and so, lacking the will to stay up until possibly 2am to see Teeth Of The Sea again (assuming my calculations of the earlier delays are correct) I slink off to bed.