London quintet Oh! Gunquit initially split the jury here with their cover of the Angry Samoans’ ‘Lights Out’. They certainly make it their own and it’s a less than obvious choice but is it a version that’s going to deserve spin after spin in the future?

For the answer to that question you really have to hear the track in conjunction with the rest of the contents of the band’s debut album Eat Yuppies And Dance. Released on the venerable Dirty Water label it contains a body of work at once slightly removed from the label’s staple garage, surf and beat sounds but which nevertheless displays a firm grasp of the constituent parts of those genres & more besides.

Tina Swasey & Simon Wild’s vocal interaction is a real strong point on the album and it’s particularly pleasing to have them alternate the lead vocal parts. The B52s often come to mind, especially on third track 'Caves' whilst the heavier 'Bad Bad Milk', with the saxophone up front, recalls The Cramps with a more vocal Poison Ivy.

The sax plays a prominent role on 'Hope In Hell' as well, the first of the band's trashier party numbers & one that likely goes down well live. As, really, you'd have to imagine all ten songs herein do, such is the pace & verve the five players imbue their work with. This is a great party album which demands that its title be lived up to by the listener (although dancing on a heavy stomach of Yuppie may not be the best for you so maybe pass on the bankers).

Oh! Gunquit can be experienced live at the third outing of the Hipsville festival at Bisley, Surrey over the third weekend of May (event website here).

Eat Yuppies And Dance is available from amazon & iTunes. 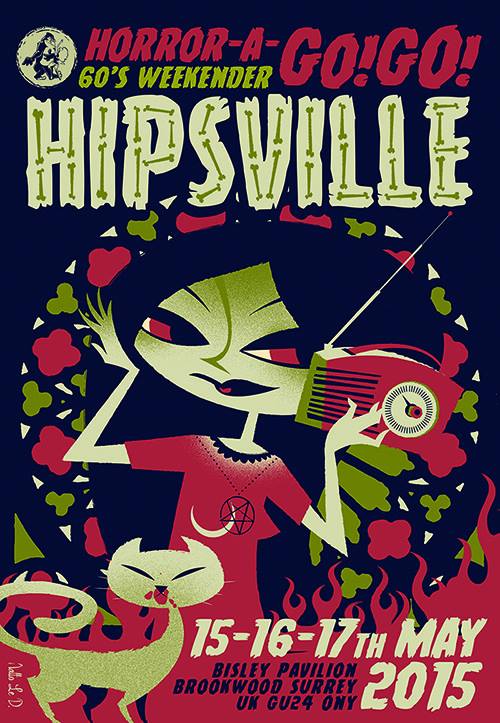 With barely four months left until the Hipsville Horror-A-Go!Go! weekender lays waste to Bisley & the surrounding area the fiendish folks behind the event have unleashed their full line-up upon an unsuspecting & unprepared public.

Make no mistake - this is a terrifyingly good and original gathering together of international garage punk & other Sixties madness which will set your bones a jangling (whether there's any flesh on them or not). Be afraid, very afraid.

Doing their level best to either give you a good time or scare you into an early grave will be the culprits listed below:-

“The monstrous sound of rock’n’horror rises from the grave! ” video/info

“HIPSVILLE’s favourite band returns, even we don’t know what they have in store for us this year!”

THE TiKi HEADS (who knows?)

Ticket information, directions, accommodation options etc. can all be found on the event site here.