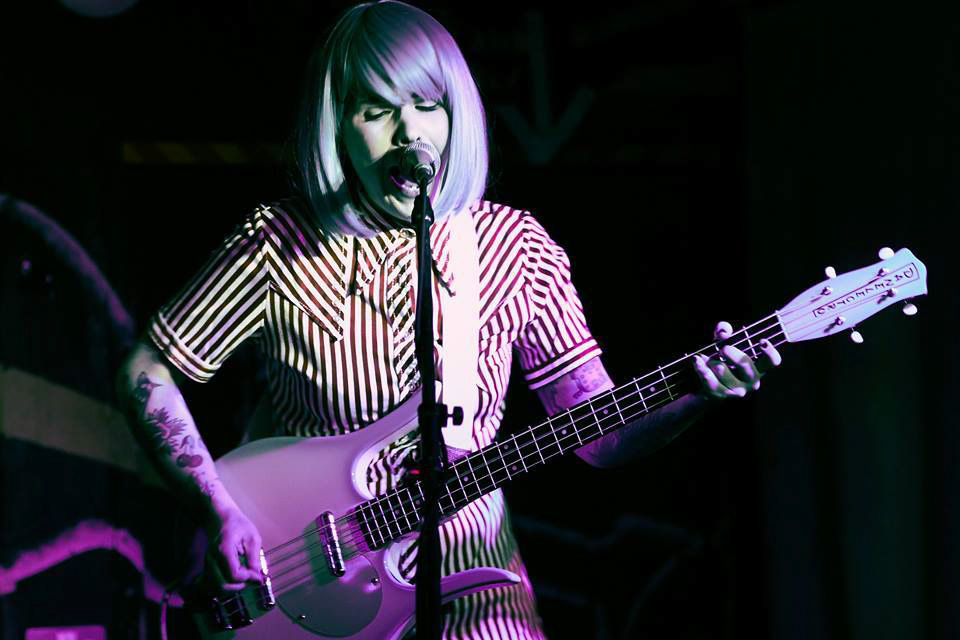 Ahead of this years Franklin Fest (where did the last 12 months go?), our very own girl in the garage has managed to have a good old fashioned gossip with few of the participating acts. They'll be an article each day this week leading up to the opening night - Thursday 29th  - so you can look forward to intimate tête-à-tête's with MFC Chicken's Spencer Envoy, Chrome Reverse's Lili Zeller and Los Coyote Men's Sir Randy 'Captain Dynomite' Hornknocker! no-less.

EVR: We've been together for about four or five years and after a few lineup changes etc. we are currently a three-piece. Myself, Erin, on bass and singing, Jay on guitar and Ash on drums.

DS: Okay, and how did Nervous Twitch evolve, and did you know each other beforehand?

EVR: Jay and I are a couple and we met through music and going to gigs. Jay was in a different band at the time, and has been in bands since he was a teenager. I originally came on board as a drummer and it was my first proper band! In our early days we made the decision for me to move to bass which vacated the drummer position which is where we're introduced to Ash through a friend.

DS: So what kind of music drives the band?

EVR: We are all fans of various types of music but I think what we all share is a love of a catchy pop song and playing punk rock... so I think that's how we get our sound. Music that inspires our writing is bands like The Ramones, Billy Childish, Nobunny, amongst many many others!

DS: Care to mention a couple of tunes that have inspired you?

EVR: I would find it hard to pinpoint inspiration down to a particular song but album wise Nobunny Love Visions/First Blood (or maybe the song 'Chuck Berry Holiday'!) Ramones Rocket To Russia, or maybe just them all! Billy Childish has A LOT of great songs and far tooooo mannnnyyy albums ha ha! 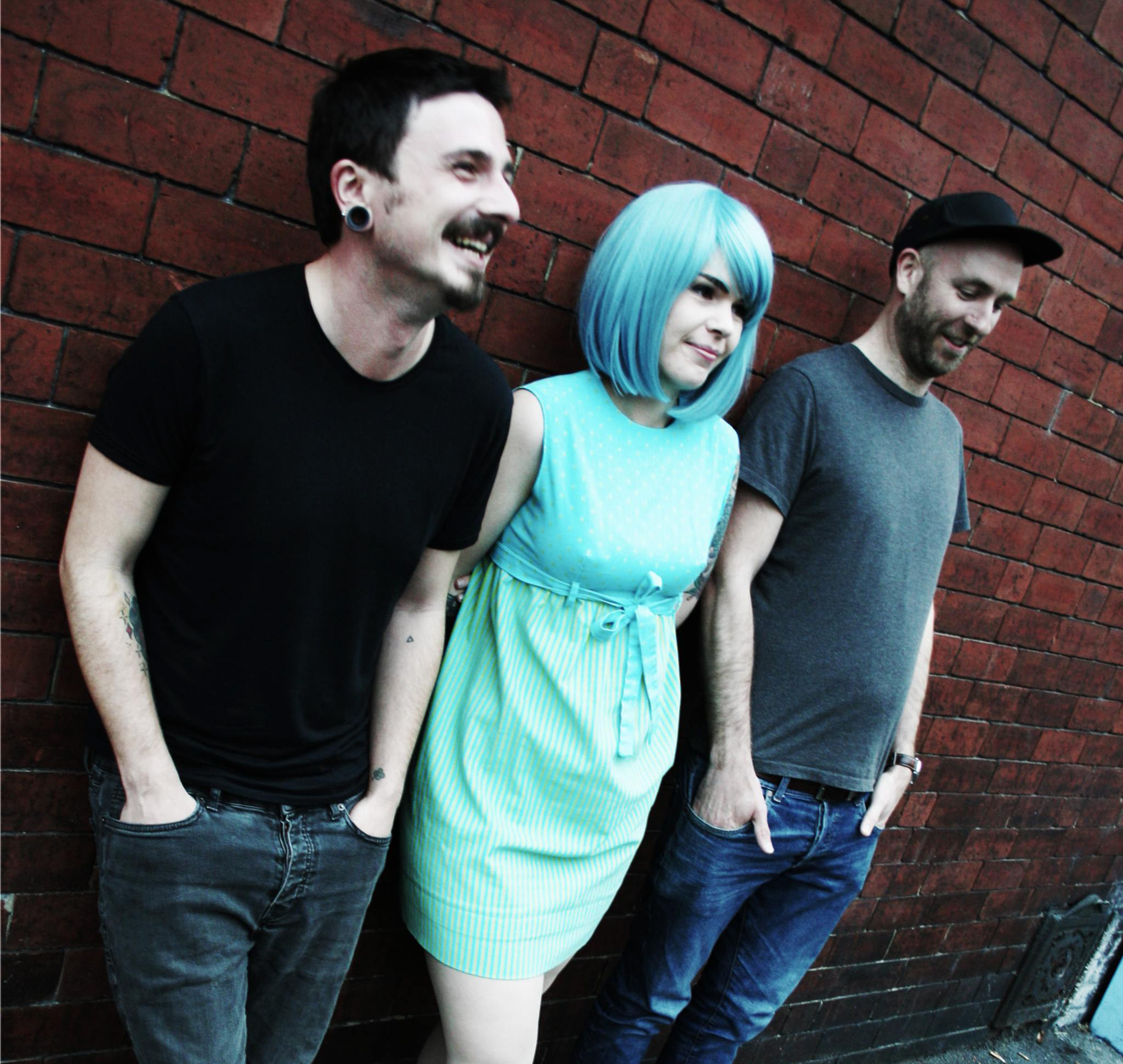 DS: You certainly can't go wrong with a bit of Mr Childish. Any particular incarnation of his that you prefer?

EVR: I personally love The Delmonas. Today we had Thatcher's Children byWild Billy Childish & The MBE's on the turntable, which is awesome. Also a fan of the Headcoats, Headcoatees, Milkshakes, so most of his music! He just has a great knack with writing songs!

DS: Turning to output, how many releases to date?

DS: ..and what are the band up to at the moment?

EVR: Just finished album Number three “I Won’t Hide” (which we are all very excited about!) which will be released in October on Odd Box Records, as well as a single on Punk Fox!

DS: Will this be the first time you've played in Edinburgh?

EVR: We played in Edinburgh when we toured spring 2016. Awesome gig, so much fun! So we’re all excited to be back!

DS: Are you sticking around for the whole weekend, and who are you looking forward to seeing?

EVR: We are, and can’t wait to see all of the bands really! Sad to be missing The Fnords on the Thursday (I will catch them one day!) but otherwise looking forward to MFC Chicken, Coyote Men, Das Clamps, and The Sensation Seekers.

Many thanks to Erin for taking the time out to chat.

You can catch Nervous Twitch on Friday evening at The Franklin Fest 17. More information about the band can be found here.

It's been 28 years since imperishable RnB hipsters (in ye olde sense of the word) The Beatpack released their debut EP on Screaming Apple Records, recorded by Billy Childish no less. I caught up with front man Hugh Dellar on the eve of their Scottish dates.

D: Set the scene as it were, how / where and why did you get into this particular genre?

H: I started out in a garage band Thee Wylde Things when I was 16 in the mid '80s. We morphed into The Beatpack by 1987. We were based initially in Hastings then moved to London. Simon had been in The Tyme Eliment in Huddersfield. We poached him in 1987 and started recording. We had a deal with Screaming Apple in Germany. Will the bass player joined in 1989.

D: Sounds like you all had a good knowledge of '60s garage/r'n'b?

H: Yeah. Totally. From when I was 15 or 16 I was obsessed with The Pretty Things, The Stones, The Kinks, The Yardbirds. American garage stuff. Dutch beat like The Outsiders. Totally evangelical about that music. Still am.

D: Fab. It was harder to hear/find the more obscure records back then, and of course we're talking pre-internet. I can relate to that obsession! How was the move to London? did the signing with Screaming Apple Records happen once you'd moved?

H: We moved to London to avoid getting into endless fights with locals. And to be nearer the scene. And record stores.

H: Screaming Apple happened after Ritchie from the label saw us kill it at The White Horse in Belsize Park. He gave us some money and we recorded the EP Head On Home with Billy Childish, recorded in Red Studios in Borstal, near Chatham. That came out in '89, then the LP Could You Walk On Water, and a final 45, Not Tonight.

H: The scene was ok. There were us and The Aardvarks. The Margin of Sanity. The Clique. But the US stuff was more where we were at. The Tell Tale Hearts, The Chesterfield Kings. We suffered from not being Mod enough for the Mod scene in London.

D: Yep. What is it with those pesky Mods?

D: It must have been quite a whirlwind, being so young, obviously passionate about the music you were playing, putting out records, recording with Billy Childish. Why the split?

H: Long story. There was a lot of acid flying around. And E.

D: Okay ... kind of goes hand in hand with the music though doesn't it?

H: We were starting to open up to other music. Stuff we couldn't play ourselves. We played with acts who were in it to get famous and had our head turned. Grew up a bit, grew apart. Folks wanted to do other things with their lives. Girlfriends, the usual.

Our Drummer went off to travel and we all had to get proper jobs.

D: So in the interim, did you get involved with any other musical things?

H: Yeah. Will did Cee Bee Beaumont among other things. Simon was in bands. I became a teacher and lived in Asia for four years. Stopped playing music but wrote for Shindig magazine, and bought endless records. We didn't see each other much, for ages.

D: So how did you get it together again?

H: We realised it was twenty years since the LP, agreed to meet to play a few songs from it. Realised it sounded great and went for it again. We realised how much we'd all missed it. Screaming Apple also reissued everything we'd done for them, and we did new 45's for State Records.

D: What are the differences playing now?

H: It's harder to get gigs these days as we're off the scene. We're older and uglier, but we reverted to basics. Hurt playing stuff we love.

H: Now we make a record every year and hang out together. Write new songs.

D: Rewinding slightly, what would you say was the first record you heard that made it all happen for you?

H: Hard to answer. The Stones. Always. I guess. 'Get Off Of My Cloud'.

D: I was expecting something more obscure, but then I suppose that lead you to seek further.

H: Yep. Then The Pretty Things. The Outsiders. Q65 etc. Back From The Grave etc.

D: Natch! What do you think about the new generation of R&B/Garage bands such as Les Grys Grys?

H: Love them. But they love us more. They're good mates of ours. They're good people. Love the Greg Prevost solo stuff. Black Mambas. Detroit Cobras etc.

Not much in the UK though.

D: What about The Baron Four?

H: We've Got the new EP out. Back, Behind And In Front. It's rather good.

We can certainly vouch for that. A glowing review of their EP Back, Behind and In Front can be found here.