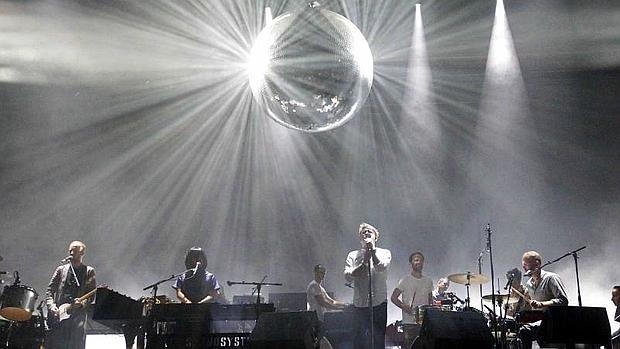 For the third year running, Primavera Sound is the festival of choice. Especially for a city slicker like me, there’s something about the beach festival right in the beautiful city of Barcelona that just works. Standing at the top of the staircase if one wants to go down to the Pitchfork or Adidas stages you can see the city lights along the beaches stretch from left to right, and, when at one of the main stages, you can see the tall, Barcelona buildings betraying the fact that, yes, you are smack in the middle of one of Europe’s biggest cities out there. If you go to festivals for the camping, camaraderie, or wellies and mud, this might not be your thing. For those alienated city weirdos, the eclectic programming only enhances that there’s no singular group one belongs to.

Beak> starts off my festival, and do so amazingly well. The trio knows how to do their brand of rock, and the way they slide from one part of a song to the next is a real marvel. The guitar work is really splendid, throwing out some nifty lines, and the set is varied enough throughout to keep people exactly where they are for the entire duration. You can see this is a band of pros, who know what they are doing, and who then apparently can enter a new synth player into the starting line-up without any major hitches during the songs. They, themselves, seem to enjoy it all as well and thus the start of the fest is as positive as one could hope for.

It goes quickly downhill though, as I love Destroyer, but the sound is muddled. Any time there’s a guitar that enters the song, the pristine craftwork of the band comes tumbling down. Which is a crying shame, because last year seeing them in an indoor venue at Le Guess Who? was amazing, with Dan Bejar fronting his band’s intricate works with passion. Here, too, he goes for it, but what worked indoors doesn’t work at the Ray Bans stage today. I’d happily see them again, somewhere, someday, but this makes for an exit before their full time is up.

Which doesn’t get us in time to Air, at least not to see them in a proper position. Chatty people surround us everywhere, which isn’t necessarily the way you want to enjoy the super clean, even pristine, sounds of the French band. The vocals sounds angelic, and it seems they have their stuff together for this one, but it is a bit too rowdy where we are standing, which means we don’t get the beauty, and it only comes off as tame. We wait until ‘Sexy Boy’ comes (oooohhhh-hooo), and then we go from the main stage to one of the smallest stages there is.

Now, being brought up with MTV Unplugged, I’m curious to see what an unplugged version of electro-pop artist Jessy Lanza will sound like. It is the Ray Bans Unplugged stage after all. Apparently, not really, as the show starts wildly late because of all kinds of difficulties with the electronics, cables, and assorted instruments that are on it. When she does start, she starts hesitantly, with not everything completely doing what she wants yet. Drum sound is a tad off, and the microphone doesn’t seem to register her lower singing, although it evidently does manage to catch the high yelps. The two women on stage are down two sets to love and serve is to the other side.

If one band can be proud of today’s set, it is though these girls. Not only do they right the ship, they rebuild it to a cruise liner with the best party in town. The crowd is getting increasingly more into it (it’s packed, and then some), and they are regaining their swagger, which breathes new life into the tunes. This year releasing her album Oh No, she rolls through catchy and punchy songs like the title track and a prolonged, dancey version of ‘Never Enough’ in which she gives it her all. Being last on the stage, she can make up for some of the time she lost at the start, and all there are all the happier for it.

From a young woman ready to reach a wider audience to an old all-American music composer showcasing the oeuvre he has built up during years and years in ol’ Hollywood. That, and doing some Ennio Morricone to boot. John Carpenter has a full band backing him as he does all these well-known synth riffs from the movies we grew up on or belatedly watched somewhere during our lifetimes. That deep synth sound is the key, and the rest of the band fleshes out the sound perfectly. In the background we see the images of the movies these tracks graced, and he does some work off his Lost Themes albums too. Carpenter shows you don’t need to be a fresh, young face to suddenly appear at festivals and engage and hype up crowds, you just need some quality work and a keenness to play them. So, from slasher flick soundtracks to album material, we get it all, with the haunting synth sounds giving the Barcelona night some extra flavour.

Back on the main stage we celebrate the return of LCD Soundsystem, and in a headliner set we get everything we want and more. The roster is one of all-stars, with Nancy Whang and John MacLean from The Juan MacLean with Pat Mahoney and Gavin Russom, staples of the DFA roster, and Al Doyle from Hot Chip we just have it all there on stage. And then, the main brain behind it all, James Murphy, rocking, dancing, and yelling out all the frustration and anxieties that one builds up in life. From dance-punk tracks to all-out disco, from rawness to the super slick; we get everything and more in a headline-worthy set by the New York band.

We get the old work, with tracks like ‘Yeah’, ‘Daft Punk Is Playing At My House’, and ‘Losing My Edge’. The last one has a beautiful, slow moving bass base, making you dance and swing your body as Murphy narrates what basically seems like a nervous breakdown turned around, for, in the end, yeah, they might be more interesting, prettier, and have an amazing web plan, but I was there when all that fantastic shit went down.

‘Home’ is one of my favorites off the last album, such a slick creature it is, Talking Heads-inspired, and ending with that fab line "If you’re afraid of what you need, look around you, you’re surrounded, it won’t get any better". Closing out it’s the piano anthem ‘All My Friends’, saying what, in the end, after all, turns out to be really important. That you’re there, with friends, and surrounded by people with similar anxieties, dancing and losing it to a band that — for perhaps a niche group but still — defined a generation for some. And they, here, tonight, showed why in a strong, get-yr-feet-moving set.