Though they may never credit themselves with the imperial-like qualities of the free jazz trailblazers of the ‘60s or the space jazz pioneers of the ‘70s, Ariya Astrobeat Arkestra blaze their own trail in their unique brand of afrobeat music.

Remote, cavernous places have always attracted soul-searchers and Cardiff’s The Globe is no exception. Established in a residential area in 2009 for the purpose of paying tribute to the music of the past (often quite literally), The Globe is a gentrified grotto for grown-ups.

In an apparent effort to thwart the constant threat of noise complaints (which led to the closure of similar venue The Point early 2009), it appears that The Globe has both re-branded and re-plastered in recent years. It now paradoxically boasts a space-age, Jetson’s-style exterior but a roughcast-walled interior which is as soundproof as it is Flintstones. Nonetheless, this identity crisis matters little when you are able to book the likes of Geordie movers and shakers on the soul scene, Smoove & Turrell. Soul-searchers will surely flock to see such acts, wherever they are located. 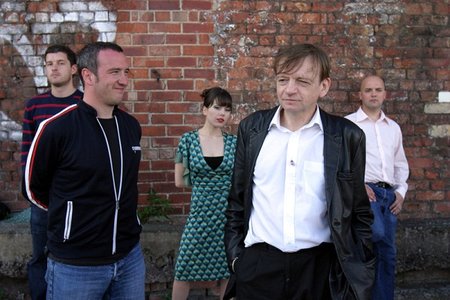 The Fall have never been a band with an aim to please the masses. In fact, if anything they’ve striven for quite the opposite while inadvertently building a truly zealous fan base in the process. You’d be forgiven for thinking otherwise judging by the congested state of the Brudenell this evening, but the sold out show is brimming with both long-time devotees and curious bystanders devoid of any preconceptions and ready to be either converted or abhorred.

Container Drivers and Evil Blizzard are both responsible for preventing an increasingly abundant crowd-stray into pre-fall restlessness. The aptly named former are a local trio who initially find keeping momentum quite an arduous task, albeit they are more musically agreeable than the former, whose mask-clad get-up provide a sinister but bizarrely enjoyable and intense experience.

Fall fan or not;  whether you’ve acquainted yourself with their idiosyncratic nature mercifully, or stumbled upon it unwittingly, you will be familiar with the quote John Peel famously declared to his hoards of believers; if you’re not aware of the cult-like prominence of Mark E Smith and his ever-changing affiliates – “always different, always the same” was the aforesaid. Of course, no one could have put it better themselves: 5 simple words to sum up a band so complex in their ever- broadening discography. It’s a line of words that plays on my mind throughout the evening, because this show is just that: sonically different but still customarily The Fall.

“He is not appreciated” MES once testified in Hex Enduction Hour’s ‘Hip Priest’.  Tonight he is more than just appreciated:  the long-awaited arrival see’s the band enter onstage without the presence of their front-man, but when he does finally meander on aimlessly, he’s extolled to the highest calibre and presented to us like a godly waif ; we’re all not worthy. The instrumental introduction flaunts strong, offbeat rhythms that mask the clumsiness of Mark’s arrival. Staying true to his unpredictable disposition though, MES continues to bumble around the stage, occasionally wandering off and out of sight while he reads the lyrics from a sheet of paper (even the man himself can’t always remember the interspersed nature of his lyrics – hardly surprising after 29 albums) but we wouldn’t have it any other way.

If you came expecting a collation of something akin to a ‘Best of The Fall’ experience then you are sorely mistaken; MES and his contingent are intent on keeping the set-list relatively contemporary with the majority of the focus being on their most recent efforts.  The heavy bass rhythms from ‘Reformation’ sound particularly prevalent while ‘Sparta FC’ follows suit in a similar vein with keyboardist Elena provoking an onset of crowd-contributions. Classics such as ‘Container Drivers’ and ‘I’m Into C.B’ fulfills any need to hear something habitually by The Fall. Meanwhile we’re exposed to an uncharacteristically buoyant version of MES, where the occasional smile and playful interaction with his band members suggests an unfamiliar joviality and confirms what we’re all thinking: this is a show not to be missed.

The show reaches its climax with ‘Blindness’ – a highlight of the evening that boasts an elongated 9-minute long entrancing rhythm that catapults the Brudenell into a state of awe and chaos and brings the evening to a triumphant finish. An on-looker next to me quizzically blurts “what just happened?” and I’m left wondering the same. One thing that is clear though, The Fall not only still have it, this is one of their finest moments.

Having seen Dropkick Murphys several times in the past, I was confident that their latest tour in support of the recently released Signed and Sealed In Blood would live up to my high expectations. The venue: Manchester’s HMV Ritz - a somewhat unusual choice given that it is dwarfed by the band’s previous Mancunian venues, The Academy and the O2 Apollo. However, a smaller venue rarely spoils live music and indeed on the night proved only to add to the Celtic punk atmosphere.