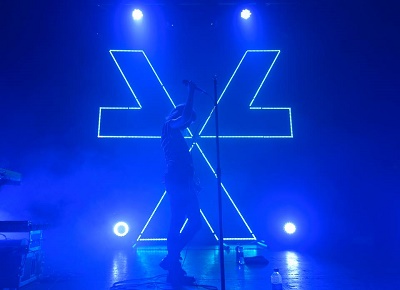 Atmosphere can make or break a gig. There are shows when it's palpable; anticipation and emotion entwining in to something almost tangible. Then there are shows like tonight, shows in which a disparate crowd form a mass of uncertainty, irrespective of universally high expectations. There are those here for whom going to gigs is a regular occurrence, there are those for whom the small-by-comparison Academy is a far cry from their past experiences of commercial arena shows and then there are those for whom this is quite clearly their first taste of live music. All are here in equal numbers and through no fault of their own make for an uneasy and somewhat timid audience.

Of course, all this is viewed from the Academy's balcony, and so any atmosphere there was may have been lost on its journey upwards. Having never managed to land tickets that have allowed us the pleasure of being up here however, it made little sense to turn them down, and what we may have lost in atmospherics was certainly made up for in both sight and sound. Each gorgeous synth loop and saccharine vocal hook is delivered and executed perfectly, the only sound issues appear when Chvrches heavier elements ('Science/Visions' for example) see the bass crackle above all else, though this rarely detracts from a band who are, quite clearly, in razor sharp form.

There's very little on-stage patter from Lauren Mayberry and co, and as such the band plough from track to track with a steadfast determination and incredible precision. Only when we're informed that the “tambourine section”of the show has come to an end do you get the first taste of Mayberry's dry wit. “You're humouring me” she adds with a wry smile.

The first of two new tracks this evening is the recently revealed 'Get Away'. A welcome inclusion, the track gets a solid reception despite its relative recentness, and marks an improvement in the atmosphere, especially when followed up two songs later with 'Recover' the most well received track thus far.

A review of any Chvrches gig wouldn't be complete without a mention of the fit-inducing light show that accompanies their performances. Lasers and smoke machines make a hallucinatory experience for the digital age; this isn't a kaleidoscopic mushroom fancy however, more a sensory staccato assault with the figure of Mayberry ever silhouetted against the neon pinks and blues.

Closing out the main set with the inevitable 'The Mother We Share' sees the atmosphere once again ramp up, though it's still not befitting of the band's effort, nor execution. Last time we saw Chvrches it was impossible to escape this song, but not having it rammed down our throats almost hourly by national radio has allowed it to once again grow on us, and there's definitely a reason why it's the band's biggest single. An expected three track encore sees yet another new song in the form of 'Dead Air' sandwiched between album closer 'You Caught the Light' and fan-favourite 'By the Throat' which ends the proceedings in a suitably emphatic manner.

Minor bass quibbles aside, you couldn't ask for a more perfect set from a band who really have little more than a solitary album in their repertoire. Note perfect, genuinely funny on the occasions they talk, and with an ability to write huge sounding pop songs with blistering choruses and sugary synths that, one would have thought, would make it impossible not to dance. Unfortunately however tonight is marred by a lack of atmosphere, something absolutely out of Chvrches' hands. We can only hope that, come March and the new album, the inevitable supporting tour will see a much more engaged Manchester crowd that lives up to the exemplary sets the band perform.