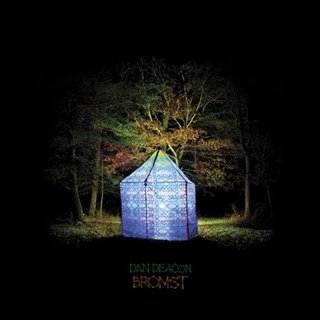 On the face of it Bromst appears to be business as usual for Deacon, only with the gleeful insanity seen in Spiderman of the Rings cranked up even further. All the trademark components are there: pitch bent and vocodered vocals; ridiculous sequenced blips and bleeps; silly song titles. But dig a little further and the true ambition and sheer scale of this record become apparent. Yes, the more traditional-sounding songs are there, and they are done very well: the bouncy riff 'Woof Woof' may just get stuck in your head for days and 'Paddling Ghost' provides some soaring electronica that shows how perhaps Deacon's greatest talent is making a potentially soulless style sound wonderfully human.

But even from the opening track it becomes clear that a genuinely thrilling musical evolution has occurred here. 'Build Voice' begins as it promises, fading in like the intro to 'Wham City' before exploding into incredible piano runs more at home in a virtuoso classical performance. Deacon is clearly not afraid to change the pace, and it's just as well: at 64 minutes this is a long record and without the slower numbers it could get a little bit overwhelming.

Luckily these changes in direction are definitely the strongest tracks on the album. 'Surprise Stefani' starts with an unusually dark sounding vocal sample, before segueing into a surprisingly hypnotic, motorik-influenced section. It rounds off its seven minute run time with a xylophone part reminiscent of the great experimental composer Steve Reich. Comparisons to Reich are even more obvious on the most unusual track of the album 'Wet Wings', a short tape experiment also suggestive of Eno/Byrne's groundbreaking My Life In The Bush of Ghosts.

Bush of Ghosts also comes to mind on the superlative 'On The Mountains', with its African-inspired drum part and vocal sample, and a Jews Harp-esque drone that gives the song a similar feel to Animal Collective's 'Lion In A Coma'. All this is not to say that Deacon sounds derivative on this album, quite the opposite, but it merely demonstrates how his palette has so brilliantly expanded. The definite highlight of the record, 'Snookered', best shows off this transformation. Its another slow burner with decidedly sadder lyrics then any of those on Spiderman - "Been wrong so many times before/but never quite like this" he mournfully intones at one point. But as the song grows and grows, becoming more and more complex, it produces the same feelings of euphoria and wonder as 'Wham City' did the first time round. It's absolutely amazing and shows just how talented an artist Deacon is.

It would have been tempting for Dan Deacon to try and rewrite 'The Crystal Cat' 10 times, and occasionally it sounds like he's trying to. But these moments are only fleeting in the masterful, complex work that is Bromst. It is a record that rewards subsequent listens, because of how much originality is packed into each song. However, despite the more avant-garde leanings, the fun is still very much present. As 'Get Older's' insane xylophone workout draws to a close you realise that, although he is getting older, Deacon is also getting cooler.

Merriweather Post Pavilion has rightly been gathering a lot of praise in these early months of this year. But Bromst is another album that equally deserves to feature in 2009's end-of-year lists.