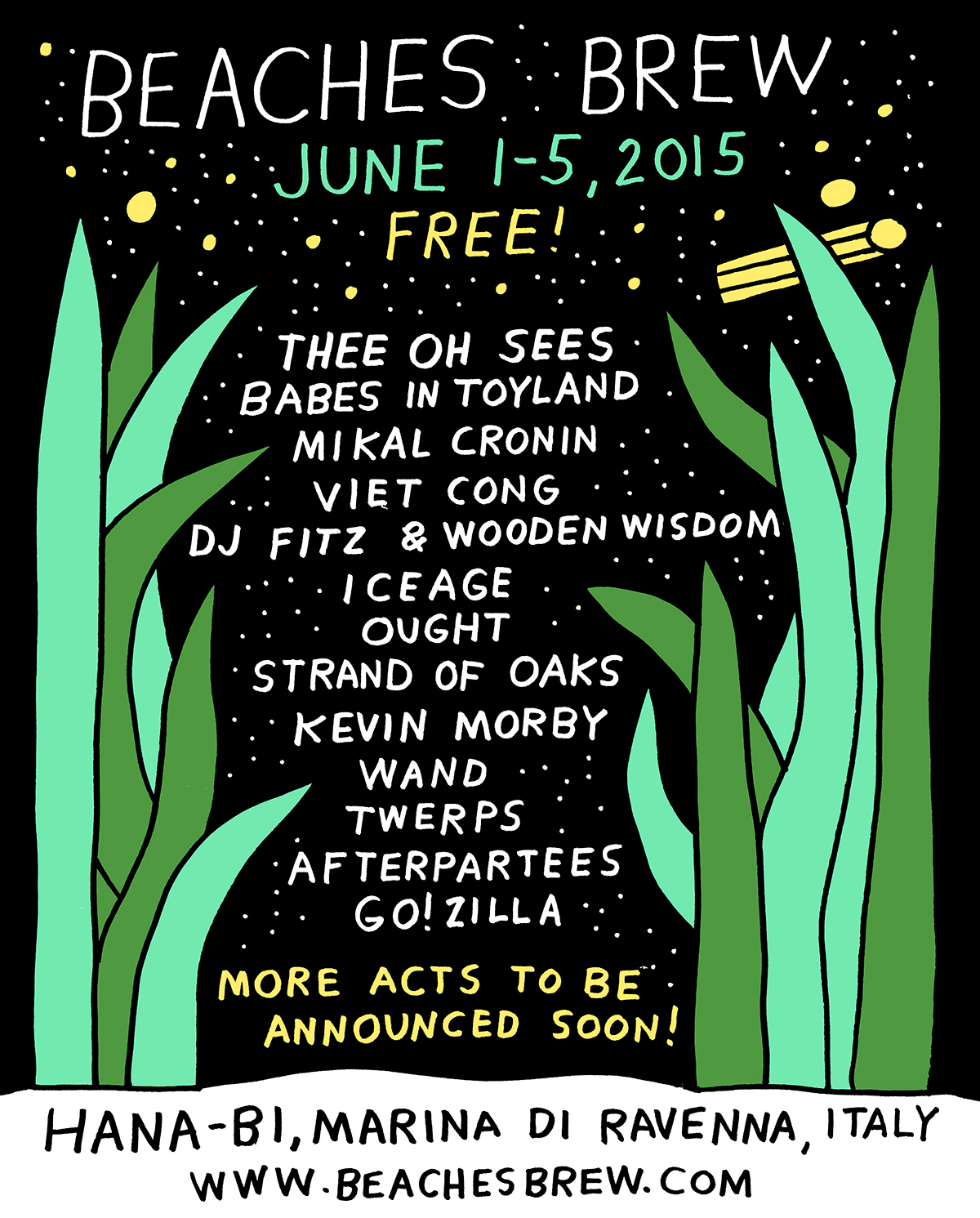 The best free festival on the Adriatic coast of Italy is back. Beaches Brew returns over June 1 - 5 on the beach at Marina di Ravenna with a line-up to rival many a far more costly event.

Babes In Toyland are this year's veteran act (following last year's appearance by Neutral Milk Hotel), which it self give you an idea of the event's pulling power.

Performances over the course of the event will also come from Mikal Cronin, Thee Oh Sees, much lauded new act Viet Cong, Iceage, Wand and many more.

Travel to and from the event is best completed by car as public transport isn't necessarily as frequent as you may be used to at home. From personal experience you're also best either camping near the venue or staying elsewhere in the immediate vicinity as the town of Ravenna itself is nine miles inland from the beach.

Further information can be found on the festival's website here.

Christ it's difficult. Each new garage(ish) band you hear sounds better than the next as you make your way through the bigger list of influences they manage to cram in to their ever better songs.

Take Wand, for example. By the time you get to 'Clearer' on their debut Ganglion Reef it's well nigh impossible to have enough map pins available to mark out where all the good stuff comes from. And that's only the second song on this monster!

This'll make you dance and then some. And if it doesn't then why are you bothering to read this? 'Fire On The Mountain (I-II-III)' is maybe too pop for some people but with a title like that you really just need to scream "FRAMPTON!" and get involved heart and soul. Trust me, it gets weird too. And then there's that immense solo. And the strings ...

It could actually all stop there and you'd be happy enough, once you'd woken up from the induced coma you had to be er, induced into. But no - there's more to come.

One of the best albums of the year? Aye, for sure.

I can't be bothered drawing comparisons between these guys and their contemporaries. They sound a bit like some other bands of now (but better) who, like them, sound like a bunch of great and in some cases not so great, apart from that one song, bands from 50 (yes folks the 1960s are that far away in time) years ago.

Why are they not on the bill at the Liverpool Psychfest next month you may well ask? They're supporting Ty Segall on tour in the USA is why so what better endorsement do you need before going out and buying this fantastic album? Don't take my (wine fulled) word for it - agree with Mr. Segall and support these guys.

Ganglion Reef is released on August 25 and available on vinyl from amazon and as a download from iTunes.