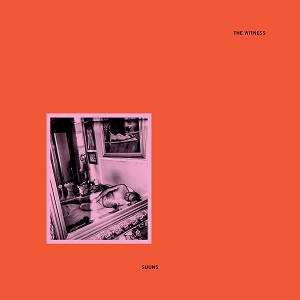 The Witness, a new album from Suuns, walks a fine line. Third stream, the title track, clocks in at seven minutes, and it’s alt-rock from here. Joe Yarmush, Suuns’ guitarist, tells how “it was a conscious decision to make the album sound like one song”. Okay Joe, sure self-indulgence is a big part of being a musician, we get it, but did that one song have to sound like an auto tune truck smashing into a noir film set throughout the album’s entirety?

In the ‘00s, Montreal was a powerhouse in Canada’s music scene and Suums were closely nipping at those that came before them (I’m looking at you, Wolf Parade and Arcade Fire). Suun’s debut album Zeroes QC was the darling of the ‘10s. It’s an approachable and structured hit getting weirder at the end leaving a lot of wiggle room to grow and for the band to find their sound. Radiohead pivoted in much the same way after two albums with OK Computer, which is now part of the Library of Congress collection. Suuns didn’t wait, from their second album you could tell they were evolving, and quick.

Fast froward to the ‘20s, The Witness struggles to find sounds that aren’t lazy. The musical topography is in constant flux throughout and it’s hard to get a foothold, which seems less about artistic endeavours than a lack of decision making. There’s also been a reshuffling of band members, lack of touring to gauge fan reactions, along with producing during a national lockdown. For some musicians, this works. Take Scott Walker for example, a notorious recluse. He split from The Walker Brothers and then made some pretty compelling music. In the ‘80s, he was given a multi-record deal and plunged into an experimental abyss. Although heralded as a musical genius by critics and musicians alike, not even Scott himself would listen to his albums more than once, they were just intricately produced musical noises slotted together. Kinda how I felt about The Witness.

Eight tracks in total, three are six-plus minutes long, with five under five minutes. Third Stream’s intentions are a false flag luring you in with hushed sounds of a rainstick and anaemic languid guitar tones but changes tack after the minute mark, which I think is probably the most unsettling part. Each song has a mini stroke baked into it. A third of the way in ‘Timebender’ chirps in with actual bird chirps. Streaming the album, I’d thought I’d slipped into an advert for unpaid subscribers only to realize, nope, this is ‘music’.

Don’t get me wrong, there are a lot of really great and pure musical elements on this album like the sax in ‘Clarity’, but they’re great pieces without a whole. Mellow tracks like ‘Go To My Head’ and ‘Clarity’ remind you that this band can, when they want to, be really listenable. That’s all dashed however when you get to the final tracks, ‘The Fix’ and ‘Go To My Head’, chock full of anxiety inducing staccato sounds, and do we really need a 20 second outro of rainstick being shaken about? Not unless you’re tripping on Ayawaska I’d say.

“There’s a level of relaxation, of accepting the band’s primal instincts, and a concentrated attempt to maximize and revise said instincts” as stated in the press release for the band. There’s not one part of that statement I’d disagree with, a rather astute synopsis of my feelings of The Witness, especially regarding the revision of said instincts.

More in this category: « Raven Bush – Fall Into Noise (Album Review) Captain Rico & The Ghost Band - The Forgotten Memory of the Beaches (Album review) »
Login to post comments
back to top