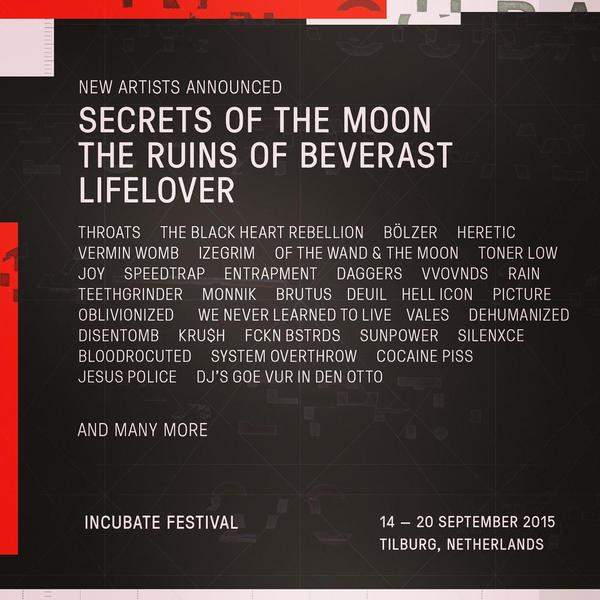 Where other festivals might shy away from the heavier end of the musical spectrum when it’s not of a purely instrumental, noodly style, Incubate is happy to embrace all things metal and beyond. Melvins were previously announced as one of the major acts at this year’s event & they’re easily filed under ‘noisy’ but throughout the festival’s entire seven day run there are a host of other genre-defining bands with which to get your fix of the faster, heavier and darker side of things.

Which is why you'll be able to see the likes of Secrets Of The Moon, Drowned, Hell Icon, Lifelover & Dornenreich on the Friday and Sunday in a specially curated forest setting just outside Tilburg.

Right at the start of the week though things get off to a brutal start with Heretic and Entrapment heading things up before the likes of Converge and Destruction Unit (curated by Smithsfoodgroup), a night of Belgium's finest including The Black Heart Rebellion (curated jointly by Nightbeards and Consouling Sounds), a four band birthday even for the founder of Doomstar Bookings on the Thursday which includes Toner Low.

Local metal promotor Mario has his own six band night on the Saturday featuring Izegrim and System Overthrow at either end of the bill. Skate & hardcore fans can get a fix of Cocaine Piss as well as some Jesus Police and others on the Sunday in the local skatepark, courtesy of the Bandana Thrashfest. Lastly the city's Hall of Fame plays host to Full Of Hell, VVOVNDS and others on the Thursday night.

Further details of all the acts (both metal & non-metal), ticket information etc. can all be found at the event website here.

More in this category: « Lianne La Havas to Tour UK/Ireland This Winter Le Guess Who? - Further Artists Announced »
Login to post comments
back to top