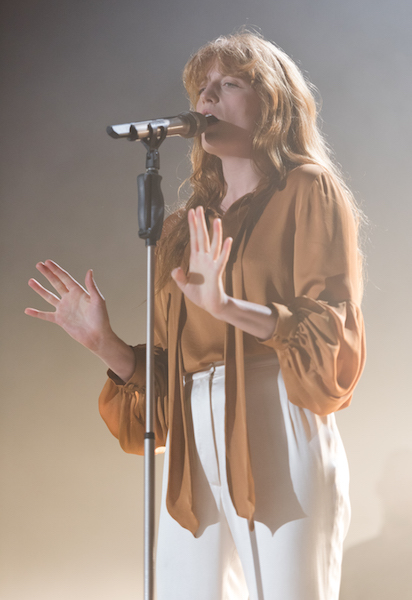 Corporate, vacuous, soulless, all words that can be used to describe Manchester Arena. Housing a cool 21,000 when at full capacity, it's difficult to imagine any artist being able to make such a room feel intimate, yet that's exactly how the venue feels almost from the first moment Florence Welch takes her first barefooted step on to the stage. 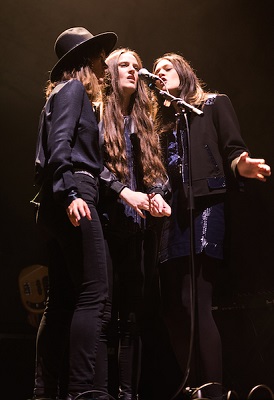 Before even that however, alt folk three-piece The Staves prove to be in fine form. The huge spotlights of the arena are focused on the trio as they surround a single microphone; their respective vocals mergign in to one single texturous harmony; the nuances and subtleties of each composition somehow audible across the cavernous venue floor. In a testament to the band and their production, it's these vocals that are the stars of the band's set, and the understated instrumentation that accompanies them is worked so as not to overshadow the vocal track. It's fragile, and at times twee, but their set is impressive nevertheless.

Opening with 'What The Water Gave Me', Florence immediately sets about whipping the crowd in to a frenzy of ecstatic emotion. There are tears almost from get go, as the surge of sentiment she inspires in her fans becomes too much, whilst those who teeter on the brink of tears collapse in to floods with the early inclusion of 'Ship to Wreck'.

The sheer energy upheld by Welch throughout her set is something to truly behold, and it's only in the quieter, more introspective sections that she allows herself rare and fleeting moments of composure. Unsurprisingly, 'Rabbit Heart' is met with a huge response from her crowd, and, as if channelling their energies, Florence runs from the stage to the rear, finishing the track from one of the several stairways that ring the arena.

About two thirds of the way through, clearly drained of her energy, which up until this point seemed bottomless, the set takes a quieter, more refined approach. A trio of tracks in the form of 'Long & Lost', 'Mother' and 'Queen of Peace' allow Welch to remain almost stationary, instead exercising her vocal range impressively whilst giving her legs some much-needed respite. Unsurprisingly, it's a short-lived section, and the tempo is brought right back up with an impassioned and drawn-out rendition of 'Dog Days Are Over'.

Encores are part of the deal with live music these days, and even a band who play a decidedly mediocre show will disappear only to come back on five minutes later. Tonight there is of course an encore, but it's one that the band have deservedly earned, and though it's only two tracks long, the anthemic finale of 'Drumming Song' is in short, excellent. Many people turned their noses up when the band confirmed they'd be headlining Glastonbury, but if this is the kind of calibre Florence & the Machine are at barely three albums in to their career, then we can expect them atop the bill of many more festivals to come. 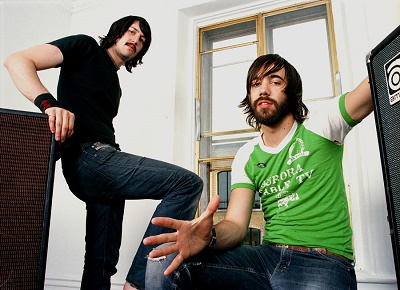