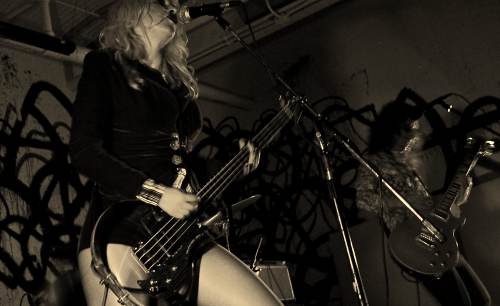 "Hallo. We are The Cosmic Dead from Glasgow and this is us at home, playing a set of music for you!", so bellows the normally very placid looking Lewis Cook after turning to face the audience following the initial 11 minutes of sonic battering the band have given us tonight. I know it's been 11 minutes because the guy to my left has been filming the entire first song and it's displayed on his screen. Get a life buddy. Ironically the set's being professionally filmed anyway.

At home the band certainly are though. For some acts that would mean bigging up their place of birth to the already converted and having baying fans agreeing that this truly is Eden. Not for The Cosmic Dead though. They pass the Buckfast amongst themselves and keep pounding away. Whether the booze is what in fact fuels them creatively, just something they happen to like or an ironic prop is unknown but it has the effect you'd expect either way. What songs do they play? No idea but that's of no matter - volume, mastery of what they do and taking great pleasure from it & just letting it all hang out on stage are what they're all about tonight (they were tight as fuck but more restrained last time I saw them) and they give the impression of being in for the duration.

On their final momentous number ("15 minutes? That's not even long enough for an intro") the guitar though becomes unusable, the keys almost tumble to the floor and a microphone is lost in the minor chaos of their rescue & things have to thunder to a halt. The crowd doesn't go wild but then it's hard enough to just clap after such a pummeling. Mind and senses numbed you wonder how any act can follow such a performance. Do these words do it justice? Not in the least.

White Hills get themselves set up (tonight has seen a lot of kit needing replaced on stage for each act) and launch off at the pleasingly high volume that's featured throughout the night. Having found them electrifying in larger surroundings at the Liverpool Psychfest a couple of years ago the prospect of seeing them in the compact basement space of Nice 'N' Sleazy's had been tantalising since seeing the date advertised, a fact shared by a great number of others too given the size of the crowd (which in a way seemed to have changed from that which was there previously).

Something however just wasn't, for me, ticking all of the boxes. Whether it was the choice of songs ('No Will' from recent album Walks For Motorists has always seemed a bit of a plodder) or the band were just in the touring zone or something else, there was a sense of motions being gone through and I didn't feel engaged. Mine was most likely a minority of one but if you're not feeling it past the halfway point of a set then you're unlikely to be pulled back from the brink and just have to write it off.

Opening proceedings tonight was Leeds' one man noisefest Girl Sweat. Unintelligible, sonically punishing blasts of lap guitar and self-help levels of howling make up his short set as he pads about the place bare-footed, killing his own electronics in the process. A rambling, shambling, Hawaiian shirt clad mentalist.

The Cosmic Dead's new album Rainbowhead is released on March 25 and is available from amazon.