Waking up to see exit polls predicting a landslide for the Repeal movement back home is a great start to the day. I feel warm inside even if the skies are overcast. Equally, the promise of seeing Idles, Sleaford Mods and The Winachi Tribe today stirs excitement in my guts that is unrelated to the festival hot dogs.

After a few showers, the sun finally shows its luminous face just in time for the ska/punk/metal hybrid of Random Hand. Their road crew entertain the crowd by name-checking the various food stalls for soundcheck. Hopefully the band are as much fun as their support team are. Singer/trombonist Robin Leitch points out that the main stage is much bigger than the stages they usually play. Accordingly, the sound is shit down the back, but the energy of the band is enough to draw us in closer where the superior sound and the skanking oldies put a whole new complexion on things. “Most of you won’t have heard of us but we’ve been playing a long time and this is the nearest we’ve played to an ice cream van. And it’s definitely the most people who have seen my flies come undone”, he says as he fixes the furniture. Riotous stuff!

UK Subs are a band that I know more through reputation than through experience. They are more familiar from t-shirts than from their music but after 40 years and 26, alphabetically titled, albums, I am anticipating a masterclass in punk entertainment. What follows is an adequate approximation of punk but I suppose you can excuse that in a band that has been doing this longer than half the crowd has been on the planet. To be honest, Random Hand had as much of an impact on me, in a shorter set, but ‘Down On The Farm’ takes me back to the old Guns 'N' Roses cover and it’s one more band off the bucket list.

From what punk used to sound like, we move very swiftly to what it currently sounds like. I’ve been listening to Idles’ debut album, Brutalism, for over a year now and it is imprinted on my brain. The chance to see them live was my main motivation in coming to this festival. I hide my pale, easily burned skin in the shadow of the bar while they soundcheck. If there were a lot of photographers for Pins last night, then I will need the thesaurus for the proper collective noun for this pack of paparazzi.

They open with the ferocious ‘Heel Heal’. Lead singer Joe Talbot has his own version of the moonwalk. When he spills his water on the stage and the crew come on to clean it, he insists on doing it himself as it is his mess. He and a crew member get down on all fours and he continues to sing as they mop up the spillage. A 10 year old boy named Isaac is drafted in to sing ‘Mother’, “This is our future” says Talbot of the boy. He dedicates the song to the crew and to the toxicity of masculinity. I hesitate to use the clichéd term “capturing the zeitgeist” but it seems particularly appropriate for this band. Idles’ musical approach is as representative of our changing society as is the unfolding result of the referendum.

There are a handful of new songs that bode well for the forthcoming album. They note that it is “An honour to open for Sleaford Mods; the best band in the country right now”. Having seen the Nottingham duo a few times recently, it is hard to disagree with that sentiment. Idles are the only band who look to challenge them for the crown. It’s difficult to write anything about them as they play. Their performance is so overwhelming that they all sweat through their shirts and the veins are visible on their faces and necks. Even watching them is exhausting. I had intended to see Fun Lovin’ Criminals next but I think I need a lie down before Sleaford Mods.

Sufficiently recovered from one onslaught of socially conscious invective, I return to the main stage to see Andrew Fearn and James Williamson let loose. The prolific pair pepper old favourites amid the newer cuts. “Are you enjoying it?” asks Williamson, “For a lot of people, you’ve very quiet. Are you fucked up?” If you haven’t seen these guys before, then you should make it a priority to rectify that. Their unique performance and material never disappoint. Williamson’s manic delivery and physical tics are a statement in themselves, but the juxtaposition of Fearn’s affable, tracksuited loner bobbing along to the laptop, while nearby an angry man spits invective, is visually arresting. It’s reminiscent of Iggy Pop’s artfully aggressive dancing on ‘70s TV. Aside from all that, it’s just hard not to get caught up in the stark, thunderous, post-punk beats.

There’s dancing of an altogether different sort over at the Showcase stage with The Winachi Tribe. I've been following these guys for a couple of years now but it's the first time I've seen them live. They don't disappoint. They're a slick, funky groove machine. The fat rumble of the bass guitar slots in with the dancey drums and percussion, laying sound foundations for the smooth vocals of Liam Croker. We spoke recently about their new single and he gives me a shoutout when introducing it; a nice ego boost for a Saturday night. You wouldn't get that from Robert Plant. The showcase tent fills quickly with the band's accessible sounds drawing in passers-by. Hopefully we'll see them on one of the bigger stages next time.

Whether it was the Black Dragon cider, the beautiful music, or the general good vibes, I'm not sure, but the next thing I remember is being woken by a nearby roll of thunder. I'm a city boy, and not usually an outdoors type, so being in a field under a nylon/polyester tent in a lightning storm is a new experience for me. The initial surge of awe and excitement that greets the sights and sounds of nature's brilliance fades very quickly when you're in such a precarious position. Thunder, at sufficient proximity, is not just an aural, but a visceral phenomenon. I went from enthralled to shitting myself in seconds flat.

After putting all my clothes and electronics into a waterproof bag, the only logical next step is frantic googling. This is only mildly reassuring, insofar as there's little you can do in this situation with no adequate shelter nearby. But deaths by lightning are relatively rare: more common than shark attacks (little chance of that in rural Derbyshire) but less so than being shot by a toddler in America. 90 minutes of wishing I had a God to pray to, and counting Mississippis, later and all that is left to do is wish I'd properly covered up my boots before the rain started. 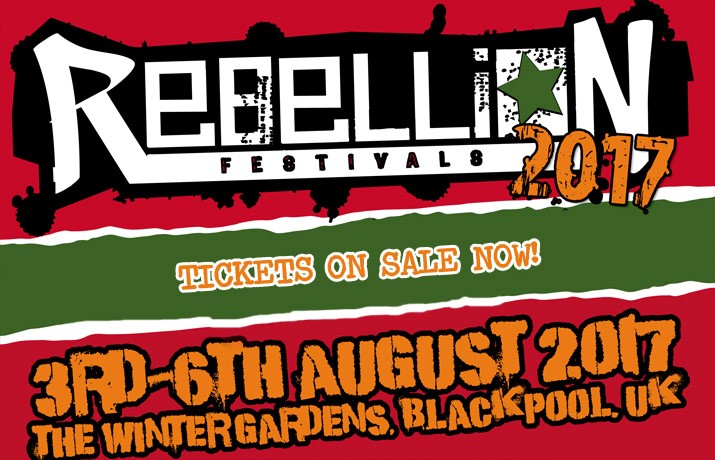 Blackpool’s punk festival has been running in various forms since 1996. Rebellion combines the old school punk and new wave with the new generation of gobby youth.

The line up for the fest is built throughout the year but even though it doesn’t take place until August, California’s Bad Religion have been announced as headliners for Thursday night and Tunbridge Wells’ Slaves for the Friday.

Already confirmed to join them on the bill are Angelic Upstarts, The Vapors, UK Subs, Canada’s legendary DOA, Poison Idea (they came from Portland, Oregon before it was cool), and the Neville Staple Band.

Further down the bill are the likes of MDC, Anti Nowhere League, Subhumans, Peter & The Test Tube Babies, Richie Ramone, Eddie & The Hot Rods, Paranoid Visions, The Gakk, and Kiss My Acid.

The all ages festival runs from August 3 to 6 in the famous Winter Gardens. The multiple stages are all indoors and children under 12 go free.