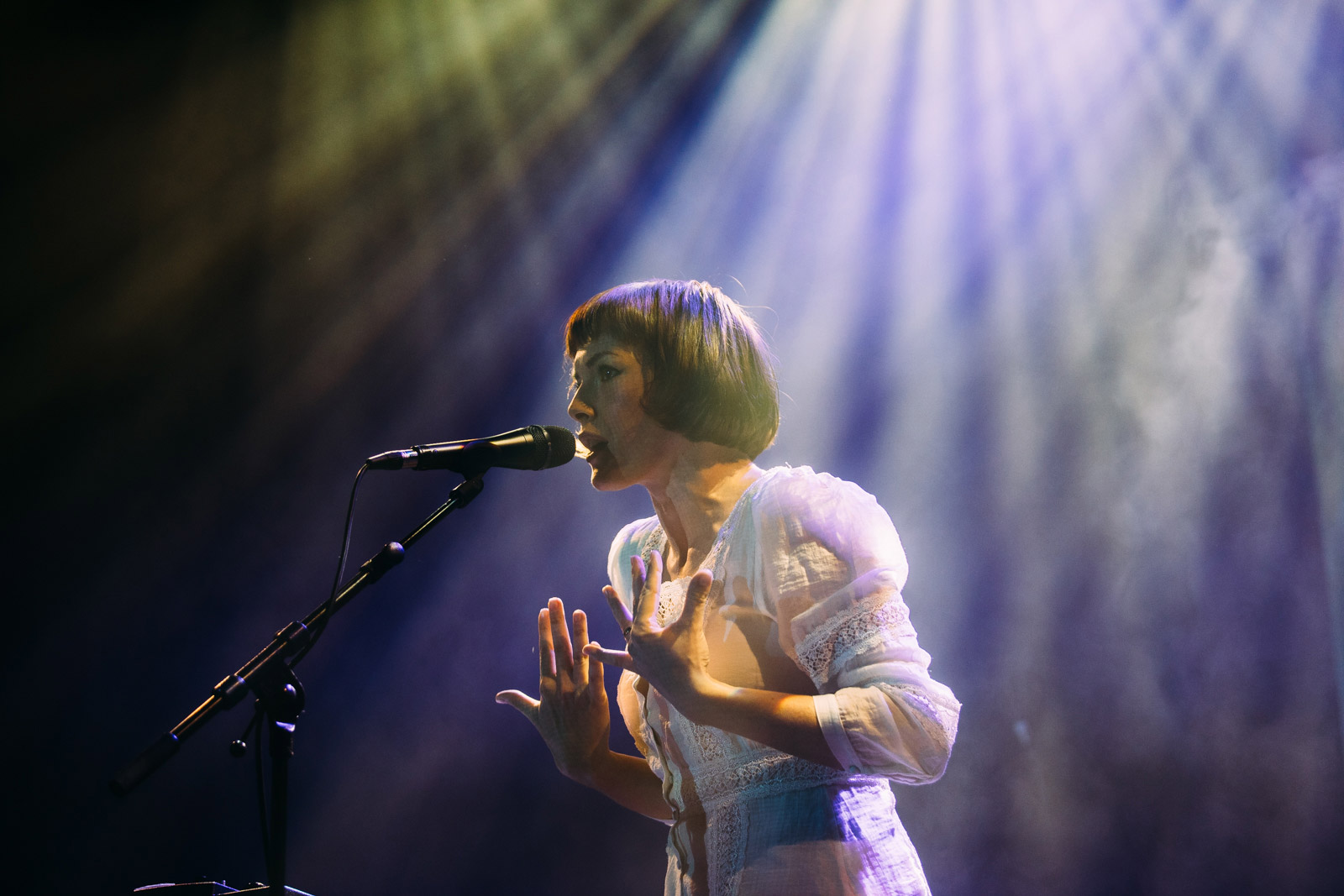 As usual when I rock up to these things, my name never seems to be included on the press list.  I usually find my way via a PR group and Musos' Guide editor. Somewhere between Liz, Christian and Kenneth, Cassandra got a bit lost. And as usual, I end up standing there as if I’m trying to get away with something. As I waited, I saw a few stragglers come in, hoping for tickets to see Manic Street Preachers. I was getting to see them for free. But I honestly wasn’t that fussed as it was Gwenno I had my sights on.

Last year, I had the delightful privilege of seeing Gwenno perform at the Hidden Door Festival.  ¾ length trousers were in evidence (on every performer, so it seemed.  It was the zeitgeist of fashion). She wore Chelsea boots (fashion accessory also sweeping from high street to closets) with such style that momentarily, I wanted to be as cool as her. I looked at her and not only admired her ease with herself and her stage presence but also the way that she glided around her keyboard and effortlessly danced about it, not missing a beat or a note. Oh and yes, she is also good at singing.

Fast forward to Sunday past and here she was again, performing in Edinburgh. This time the joint was much classier - with its constant maintenance and numerous ushers, funders, moolahs from high ticket prices and a host of premium shows. To be honest, I liked the performance space and performance itself better at the Leith Theatre. She seemed to fit that space better – or perhaps it was a better fit for her and her troop of 3 back up people.

She skipped out onto the stage (stage right) and all was blue. For the entire show. Which meant I couldn’t get a decent picture to save my life. She was wearing a white button up dress with her crew dressed in black t-shirt and jeans. After song three, Gwenno stated that, “These are my Druids – magical creatures.” It was unfortunate the crowd was quite thin at this point as I felt the people waiting to see MSP were missing out. There wasn’t much chat from Gwenno, however what she did say was well-chosen and just enough to guide us to the heart of her songs sung in Cornish.

“The old saying is a true saying. The old man who has lost his tongue has lost his lamp.” So here we learn how important this language is to her.  What a risk, what a brave thing to release an entire album in a language most of us do not know. It mattered to her and so she did. It is clear that her upbringing of living with a Cornish speaking father and a Welsh speaking mother had a tremendous influence on her. She went on to say that, “In a fair society, we tend to do the right thing. In an unfair society, Fascism sets in.” Cue big cheer from the crowd.

What I liked about Gwenno’s performance was that it wasn’t all flash and big gestures. It was sincere, heartfelt and down to earth. It was a refreshing change from other gigs that use all the flashy lights and high tech gadgetry to enchant us. Here we were treated to something much more (don’t use the word authentic…don’t…don’t …argh….it’s over-used)….authentic.

She ended her set saying the final song was about the greatest invention ever: Cheese. Cheese never sounded so good. She taught us some of those magical words and we sang our way to the end of her show. And then she skipped off the stage.

As I had my seat for the entirety of that evening’s entertainment, I decided to stay on to see MSP. 45 minutes later I burst out of The Usher Hall (still another 45 minutes left of their set). Seeing the golden spring light reflected on the buildings and feeling grateful for my good decision to leave, I felt I had learned a deep truth about myself: I am not a fan of Manic Street Preachers.

Bands playing an old, classic album from start to finish live is nothing new but Yes are, offhand & with no recourse to Google, the only example I can come up with of an act touring two historic albums at the same time. They, however, don’t seem to do so chronologically whilst, tonight, Super Furry Animals do. It’s 20 years since the band debuted with Fuzzy Logic and 19 (an equally important anniversary as Gruff Rhys points out) since they followed it up with Radiator. On a personal level it’s also that long since I’ve been to see them play.

You probably can’t describe SFA as a cult band but they do inspire cultish devotion from their fans – for a couple of friends somewhere in The Usher Hall tonight this will be the fifth of the band’s show’s seen in 2016 and of the recent ‘nostalgic’ gigs I’ve been to this is the one to generate most annoyance when people have discovered they’ve missed it (something a more obvious advertising campaign may have dealt with). Newly purchased band hats & scarves are therefore much in evidence amongst the crowd.

Initially there’s an unpleasant reminder of the show I saw here last month as the sound for opening track ‘God! Show Me Magic’ is ropey – mix all over the place, Gruff’s vocals practically inaudible and then the drums seem to be ahead of the pace. A cringey beginning that is thankfully sorted out swiftly. After that point things go as you’d expect so there’s no reason to get that concerned about the setlist despite it being the easiest one I’ve probably ever had the chance to detail. Safe to say it was a far more enjoyable show than my only other experience of such an event, Pet Sounds at Primavera Sound in the summer. Knowing what’s coming next puts you in a curious position anticipation-wise (not unenjoyable) and you at least know what you won’t be hearing, unless there’s some ‘best of’ encore (which tonight there isn’t).

Indeed playing the band’s recent Best Of : 1995-2016 album Zoom! it struck me how many slow numbers they’ve had out as singles & that, at least lumped together on one album, they don’t greatly appeal to me nowadays. Handy then that Radiator is my favourite of the band’s albums, with everything on it feeling a good fit in any order. Its rendition is unfortunately interrupted for around ten minutes early on due to the PA being blown, which just goes to show that when SFA rock out they have the riffs to beat all-comers.

There’s not a great deal of chat tonight (fittingly there's a minute's applause for Howard Marks between sets) but that’s not to say that the band appear to feel they’re there to just do a job – there’s a clear communion between crowd and group that speaks volumes and which comes to a rapturous head when they finish things off with the obligatory ‘The Man Don’t Give A Fuck’, as apt a statement about the UK today as it’s ever been. Long live SFA.

Support tonight came from local duo Man Of Moon, who went down pretty well with the sparse crowd that was in the hall at that point (they were on around only ten minutes after doors open so not a great deal of time for folk to filter in). I’ve managed to miss seeing them at a couple of events in the past 15 months or so therefore it was handy to have now seen what they can do live. They were clearly undaunted by the size of the venue but I suspect that a smaller room is where they really get into their stride so I’ll need to keep an eye out for the chance of witnessing that.