It’s been too long. This is my first trip out this year to the no-less-than legendary and always welcoming Franklin Rock ‘N’ Roll Club.

As my friend and I approach the groovy green shack, we see Logan’s Close walking in the opposite direction across Leith Links. Finished already? It’s only 9pm, surely not... it turns out they are just off to buy chips. That’s rock 'n' roll people.

It’s 10.20pm before Logan’s Close take to the floor - but that’s okay by me, more time to listen to some top tunes spun by Franklin regular DJ Tony Twoeyes. Finally the beat-ific four piece from Dunbar, a new bass player in tow (the last time I saw them play at the amazing Franklin Fest 2015, they didn’t have a bassist) open their set with a classy cover of ‘What’d I Say’. They continue at a pace with more self-penned numbers ‘Everybody Wants The Girl’ paying homage to a girl they all fancied in school, and ‘Listen To Your Mother’ played with absolutely no hint of irony. They all (bar the new bassist) have a crack at vocals. Drawing comparisons to The Beatles, The Yardbirds and a slurry of other big Beat and R’n’B ‘60s popsters would be too easy, but what the heck. 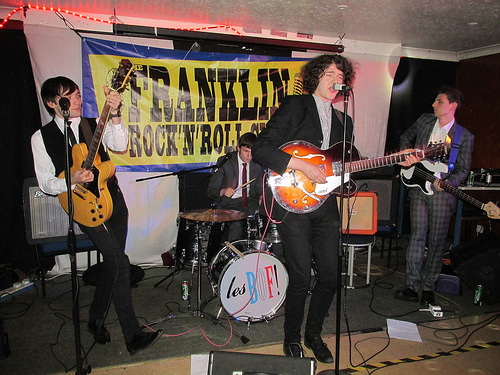 They are clearly very talented, and I hear that they have recently appeared on STV, and have a gig lined up in the big smoke. Vocalist Scott Rough has a stunning voice reminiscent at times of Mike Nesmith, and at way over 6ft, he’s definitely omnipresent. However, I am kinda willing them to rough it up a bit - well okay, a lot. They are very clean cut, however I do see devilment in those eyes Mr Rough. The high point (for me) is the mini wig-out during (and I hope I’ve got this right) ‘Where The Blues Don’t Go’ a Lightning Hopkins tune inspired by Them’s ‘Baby Please Don’t Go’. They wrap up quite a long set and encore with beat band standard The Revels ‘Comanche’ and a decent stab at Dick Dale’s ‘Miserlou’.

It’s been at least 8 years since I last saw Les BOF! My recollection of that night is somewhat fuzzy, on more than one level. And tonight they don't disappoint. They give us exactly what we've been waiting for - fuzz, fuzz and more FUZZ. Yes, yes and OUI!! It’s practically impossible not to have a good old shimmy and shake. They are a good time band and make no mistake, they are not afraid to let loose. They are taking us on an exhilarating ride tonight. Vocalist Laurent Mombet (of flippin’ fantastic The No-Things) always knows just what to do to une) get the party started and deux) keep it going on, and on. They are tight, and with wild songs like ‘Ne Me Jette Pas’ the driving ‘P-Club’ and the séduisant ‘Ils Vont Tuer Le R'n'R’ they are really hitting the g-spot (that’s the garage spot ladies and gents!). Did I mention that Mombel sings everything in his native Francais? Oui mon petite pois. It kind of adds to the whole aloof too cool for school-ness, think Jacques Dutronc and Ronnie Bird.

They wrap up a très énergique, excellente and passionnant set with a cover of Plastic Bertrand’s ‘Ca Plan Pour Moi’. The crowd is a sweaty mess, we leave collectively and light a metaphorical Gauloises…

The Franklin Fest 2016 takes place on 23rd, 24th and 25th June, including a Saturday afternoon special (woooo!). The line up includes the hottest bands of now peddling yesterday’s finest wares. Featuring such delights as the exceptionnel Les Grys Grys!! Hula-hooping ho-dads Oh! Gunquit!! Bovver boot-iful Thee Jezebels!! The fantastiske Courettes!! Spooky space bods The Sine Waves!!! and many more. It’s an international cast, and you would be a FOOL to miss out. Muso's Guide are proudly covering the event, so watch this space during the coming weeks for interviews with some of the upcoming bands. Tickets are selling fast so don’t delay! The full line-up and details of where to purchase tickets can be found here.