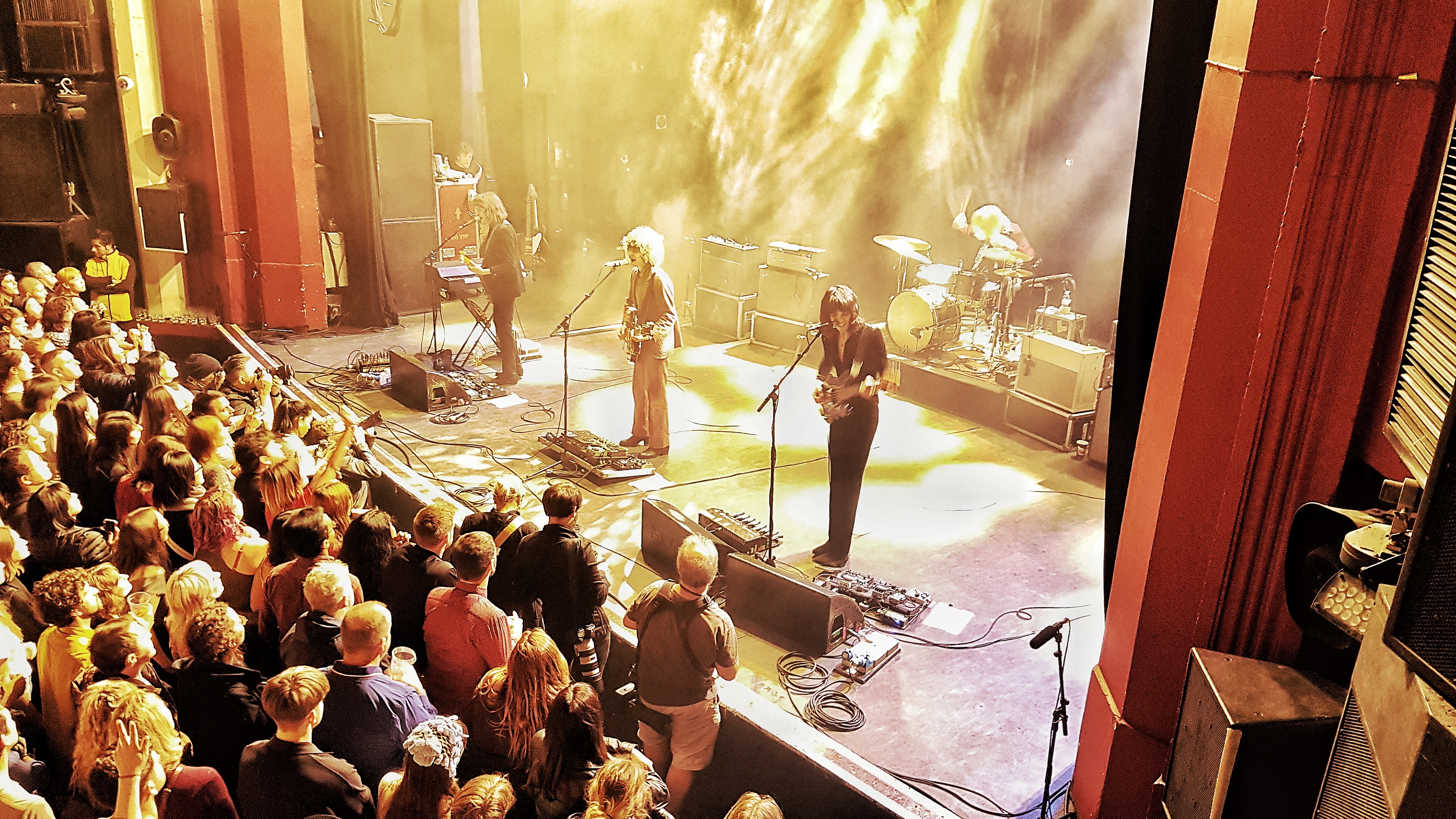 Sometimes it's hard to see stuff, even when said stuff is right in front of you, hear me out on this one. I'm going to stick to the pertinent points about 'stuff', for once in my life, relating to gigs in particular. Being short and not at the front, you're in trouble. Maybe you've just snapped back into reality only to realize you've been rocking some serious tunnel vision videographing half the gig you're (not) present at missing that sweet sweet peripheral action because you've been watching it through your phone's screen....hands up, guilty as charged. Perhaps worst of all is something we've all been guilty of at one time or another which is being too close to 'stuff (someone) we care about and mistakenly attributing those feelings and projecting them onto what's actually happening in front of us, in other words being blindsided. More on that later.

I arrived late for the Temples (@templesofficial) gig at the 02 and in a state of Popsicle (ice-lolly) this past Sunday evening and missed most of the opening acts. Melting my way into the lobby I pool in front of the guestlist ticket wicket and drop my name. It appears for the first time in weeks I'm actually on the list but not only that along with my tickets tumble down a few wristbands for the 'after show'. I act cool (no involuntary hiccups or twitching) and slap the band on before they've got a chance to take it away. I'm lead up to level 1's reserved area and finish thawing out. There's a vacuum where the atmosphere should be presently but crowds can be fickle up until the headliner takes the stage.

Temples materialize suddenly in front of us and I can't take my eyes off of them. Imagine this, a visual mashup based upon the best of Prince and Led Zeppelin at their respective peaks. I cannot compose in words the construction of a cage made up entirely of my utter and absolute jealousy on the subject matter.  James (vocals/guitar) is rocking a a tailored dusty rose suit, Adam (keys/rhythm guitar) is draped in dark colours with a Sheriff's badge on his smoking jacket (yeehaw!), Rens' open shirted neck-kerchief percussion is something to behold, I'm thinking along the lines of MC5's drummer Dennis Thompson. Perhaps my favourite though was Thomas (bass/backup vocals) who'd easily teach  masterclass on androgyny second only to Bowie (RIP sweet prince) himself. Their hair alone would get the win Britain's been so hungrily awaiting all these years on Eurovision.

This show is the last of a slew of UK/EU tour dates bring the year to an end and the fatigue's just settled into Temples bones seizing up their limber youth before our very eyes. Just like the infectiousness of a psychedelic plague can spread throughout a crowd in equal proportions so does fatigue. James starts out thanking the crowd for coming out because 'it's cold and a Sunday' two songs later into their act he back-flips with 'this is the quietest crowd ever' ya mate, it's Sunday and it's cold. It's never sat right with me when the band needs the audience to revive them, sorry but you lot are the Pied Pipers, not the other way around. To be honest I was bobbing my head at the beginning of their set but after a few tracks when the glitz and glamour of their most righteous facade wore of their stage presence wore out and along with it my attention span. I sorta just zoned in and out of their performance. I sat back and thought to myself, not a bad lot but not  headliner material. Temples aren't a hungry young band any longer, they've burnt bright and fast. They're live act reminded me of the time I saw Crows play the Tufnell Park Dome years after their break out tour where metal barricades were being torn apart by the hands of crazed fans in Birthday's basement. Now fast forward only a few years later and at both shows sparse crowds make up the bulk of the crowd on the main floor.  Kids feel it's safe enough to invite their parents and so expose them to their life in London's mainstream music scene in mild doses too weak to kill them but strong enough to embolden them against the horrors of what someone shoving their way out of the crowd to use the loo might easily be mistaken for the fabled mosh pit! Temples, the flu-jab of the music scene. Sluggish and uninspiring they move through their performance like most of the lads attending moving towards the bar to squeeze in one more pint before the encore. I find myself thinking how found myself listening to Temples is exactly the reason I wouldn't recommend them to anyone. Their vocals sound like Kevin Parker's. I say to myself here you are giving me a knock-off when you know I want that name brand.

Looking over my notes I find gems like 'rock boys in big boy outfits'. There's no denying, the formula's there you just can't fake the results. The Mystery Lights (@themysterylights) one of the breakout bands of this year for me with a modest 11k following blew me away, Temples with their 60k+ following and look may-be getting a glossy cover on Rolling Stone but won't hold my attention. The studio tunes have that smooth production sheen but lack psychedelic magic. Previewing 'Hot Motion' I fell pray to it thinking,'is this Tame Impala?' as YouTube's algorithm shuffle snuck 'em in; not by a long shot but it did grab my attention. Live, sorta the same deal, pop and fizzle. Captain Stavros footnote, seeing Tame Impala live sold me whereas their albums never really grabbed me. The exact opposite happened with Temples. Had I been on the main-floor I would've probably have just left, not because it was terrible or anything but you know how it is when one person yawns you end up yawning too. The band was flagging and I guess I just caught that from them too. 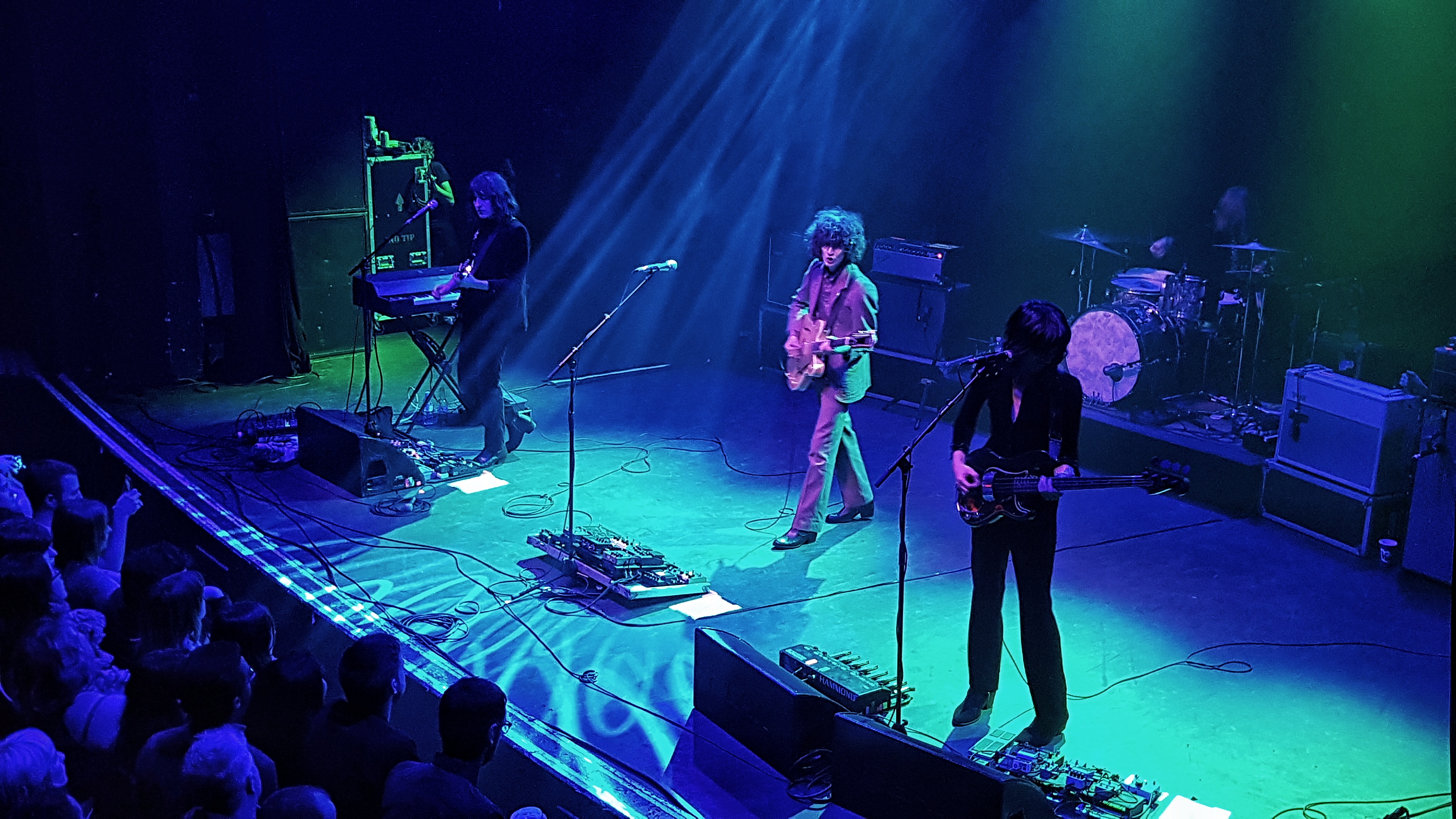 Others though found their second wind after their fourth pint. A splinter faction of  fans formed like braying jackasses congealing near the stage sending half-filled pints sailing through the air closely followed by their 'weeeeeeeeei's. The same lot attempted to start a pit which sputtered and failed during the slower tracks. Sure, the results themselves were mixed but I must admit plenty of people did get their drinks spilled all over themselves by these buffoons so A for effort? Between the aforementioned and James's random 'Vote Labour' and other off handed remarks like introducing their tune as, 'Smells Like Teen Spirit'.....came off as pretty self-assured, I know, a dirty word. As the band's encore finished up of whatever it was they were grinding out I realized I wasn't even listening to it anymore anyway. My thoughts and body drifted towards the after party instead. I really wanted to rub elbows with some of those finely adorned vintage people in the crowd who were heading back stage and maybe get the low-down on the vintage underground in London. Instead I'd be getting a different scoop.

After the gig I ran into an older gentleman with a 'backstage pass' prominently adorning his breast whom I had also bumped into earlier before the show. His name is Richard & he's James's Dad. I'd first asked him where the after party was because he looked cool, 'there's no after party for us' he'd said, 'James, the wife myself and the rest of the family are driving back home right after the gig tonight,' he'd said, ' we're all tired and are about 100 miles from London'. Fair enough I thought as we continued to exchange pleasantries. Richard was super proud of his son and told me that although 'James can't even read music, it comes from here and here' he was pointing to his head and his heart which I thought was sweet. I asked him if he'd supported James's musical endeavors not only now that the band had found commercial success but in the olden days of 2012, 'hell' he said, 'he started playing music because I was always playing music, of course I did'. Richard was obviously a proud father and furthermore told of James helping spread the wealth by producing up and comers whom he'd recently toured with too. Afterwards when I ran into Richard again he was beaming with confidence, 'what'd ya think' before I could even answer came, 'great weren't they? I told you!' I suppose I missed the nuance of the rhetoric. 'I just don't know why they aren't bigger in the UK' he concluded with. I'd hear Richard repeat this phrase to pretty much anyone within earshot. I even caught an encore at the urinals when he addressed a man with frosted tips on the other side of me as he spoke through and behind me. For the record I really hate talking or being spoken to at urinals but not more than dudes scrolling through their phones , seriously dudes, gross. Sure if Richard stepped back he might get a little pee-pee on his shoes but maybe that's what being a Dad's all about? Stepping back to get a better view.