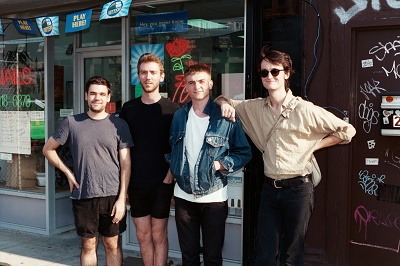 Tonight sees one of the most exciting bands of the year making their way in to arguably the best venue in the UK. With a stacked support line-up there’s plenty for us to get stuck into this evening. Chaika are up first, hailing from Leeds they set the tempo with driving guitar riffs, and an overall anthemic sound.

Chaika are a pretty interesting prospect and they have an excellent stage presence, with a charismatic front-man and ample backing. However, they’re lacking something that the other bands on the line-up tonight posses, though that said, we’re almost certain that this isn’t the last we shall hear or see of Chaika.

Next up are some other Leeds natives, Bearfoot Beware. They really are awesome, with their huge sound, they storm the stage in visceral fashion. Screeching their way through their set, their sheer energy raises the roof on the Brudenell tonight and we're completely aback. There’s a true power here, which was perhaps lacking in Chaika’s set.

Ought take to the stage pretty soon after, and immediately we notice front man Tim taking his shoes off before launching into the set. From the off there’s an excited atmosphere filling the room, as the band set about their business of thrilling us all, though for a band with one of the albums of the year though this isn’t that much of a difficult prospect.

Tracks like ‘Pleasant Heart’ speak for themselves, whilst Tim’s delivery is spellbinding as he dances and croons. The crowd in complete awe of him, their angular indie rock providing perfectly danceable grooves throughout, if anything its difficult to prevent us from staying still.

Yet tracks like ‘Forgiveness’ project a whole different vibe, Tim’s vocals taking the key role with minimalist music. The whole feeling of the set is somewhat shambolic, yet that endears us to the band even more. They have a limited repertoire but this is often for the best, a short sharp stab without spinning things out.

Ought fly through their set with effortless ease. There’s intensity, a purposeful looseness and a phenomenally charismatic lead singer, overall culminating in a brilliant set. The band close out with the phenomenally ramshackle 'Gemini', though as they attempt to leave the stage the crowd chant and they’re forced to stay and play as yet unreleased track ‘Beautiful Blue Skies.’

This evening has proven why Ought are hotly tipped for big things, with their truly endearing behaviour and exciting performance, it’ll not be long before everyone is humming ‘Beautiful Blue Skies’ on their morning commute.

Leeds based four-piece The Dunwells are kicking of on their UK tour this week. The band will release their new EP Show Me Emotion on Monday September 8 and to coincide with the start of the tour, you can stream the latest track 'Communicate' now.

With one album under their belt and several successful shows in the US and UK, The Dunwells know their career is only just beginning. And they have not let any time go to waste. Having been inspired to work with producer Steve Harris (Kodaline, Kaiser Chiefs) after hearing Kodaline’s 'High Hopes', the band set about tracking Harris down.

Band member Joesph Dunwell explains, “We wanted to get away from the Americana sound we had been labeled with, stripping back the acoustic guitars, going deeper, Steve seemed like the perfect man for the job.” After a gig in Seattle the band heard they’d missed him by just a few hours but they eventually found out Harris lived in Yorkshire. After hearing the band’s demos he was on board.

You can listen to the track ‘Communicate’ via Soundcloud and watch the lyrical video
for 'Show Me Emotion' on YouTube.