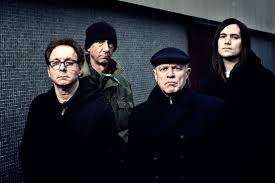 Wire are a British rock band who have been linked to the punk scene since they formed in the 1970s with their debut release Pink Flag. Fourteen albums later, Wire, accompanied by their latest self-titled LP set up their equipment on the Brudenell stage. Slightly in front, a curly haired couple share a delicate moment, hopefully in reminiscence of that sweaty night they met; probably throwing punches and wearing ripped denim in the '70s.

A shiny, silver Ipad is placed centre stage just left of Colin Newman’s microphone. Visions of synthesis and guitar pairings come to mind, or Newman impressively programming his own light show right from the stage. Its purpose is still undecided as it seemed to be only used to check lyrics, as Newman glances over to the white illuminated screen and clicks to what can only be a shortcut to Lyrics Mania.

For some reason Wire’s transition from track to track does not feel that fluid or consistent. This could be down to the Robert Gotobed on drums counting in with a traditional click from the sticks with every other song. Or it could be down to the contrast in sound from the Pink Flag tracks, to sounds from their latest release, Wire. This is not necessary a bad thing, but at times certain tracks did drag on with no reason or intention, which is surprising due to most being under three minutes.

The show is packed with newer tracks like 'In Manchester' and ‘Burning Bridges’, along with the more familiar songs like ‘Blessed State’ taken from their 1979 album 154. The aggression in the delivery has softened, yet still remains engaging and meticulous. What is left is a slightly downtrodden, deflated punk groan from Newman’s throat, which makes each track darker and more looming. The show peaks at a high frequency, pounding through the chest of Wire’s followers. Even plugging the ears of some with yellow foam, the pure rattle that squeals out of Matthew Simms’ guitar leaves the unplugged ears ringing afterwards.

The crowd that stands looking up at the quartet are not surprisingly mature. Unconventionally, a young-ish looking guy walks through the crowd with a full 12 inch box of pizza and begins to munch on it as the performance continues. Slightly strange, but it does sum up the lack of raw enthusiasm that seems to correlate between the less aggressive performance and the audience.

Tracks from their latest album sound almost dystopian, running guitar riffs and the repetitive hi-hat climbs without reaching a crescendo. This abrupt end urges the sweaty necks of the people standing side by side to yell things like “We are not worthy”. That alone shows the cult influence that perpetuates out of Wire's every move and every note. Sturdy baselines and wondering guitar licks add to the atmospheric satisfaction in tracks like ‘Harpooned’ wire intended for the evening.

The show tonight seems to be more about a bands exploration as Wire's music takes a slightly different direction into a distance dystopia fuelled by atmospheric melodies. This is something they do exceedingly well and the audience do look on idle yet content with Wires’ new direction. For me the show is too self-seeking, as I would rather punk punched me in the face than wonder by aimlessly. 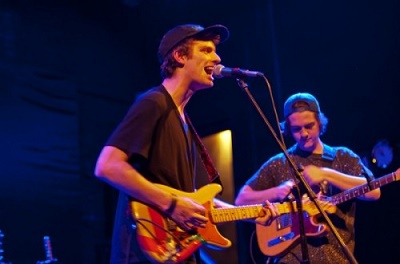 A long line of devotees spill out of the Leeds Irish Centre doors, small groups of smokers gather around the car park, hoping to casually bump into that guy in the hat that everyone is talking about. The calm atmosphere quickly changes inside when Mac Demarco walks on to the stage, however; “If it’s your first time, then welcome to the club.” A spew of cheers and wolf whistles circle the crowd who have quite literally jammed themselves into a room more suited to a school disco. Equipped with disco ball and sunbeam shape lightening, Mac Demarco and his band look giant on the small stage. He invites the reactive crowd to party along with him as he opens with ‘Salad Days’, ‘Blue Boy’ and ‘Cooking up Something Good’.

The gig seems to stop between each song as the night progresses. The short silences are quickly used for on-stage jokes; crowd chants and at even one point a plea for world peace.

The crowd who look more like fish in a fishing net jump and grove to the funk-like metallic riffs of ‘I’m a Man’. It is refreshing to see any band that have the confidence to redo a track which doesn’t go to plan first time round. ‘Picking up the Pieces’ starts off wobbly and is calmly started again. Maybe Mac Demarco isn’t the most conventional when performing but no one can deny that he isn’t entertaining, at one point he changes pace and covers Bob Marley’s ‘Jammin’, not the most obvious choice, Demarco fills the instrumentals with lyrics such as “smoke up a fat one” and “this one’s for Jah”. As the gig continues it is obvious that this crowd aren’t here just to hear a few songs, they are here for Demarco’s nonchalant on-stage attitude that makes it feel like you are watching your best mate’s band down the pub.

Most of the audience feel the same as some climb over the front row and clamber onstage. They stand there awkwardly; take a few photos, laugh with their buddy’s which repeatedly results in them stopping the performance altogether. Harmless fun for them, irritating for everyone else who meet their chaotic behaviour with a dull tone of boos. Demarco and his band do well at lightening the mood with a few jokes and distractions.

Coming to the end of the gig, Demarco politely crows for the audience to crouch on the floor. Swishing his hand like a conductor the crowd take note and begin to harmoniously sing the lyrics “together” like a tone-deaf Catholic school choir. Gloriously this continues for a little longer than necessary before the band kicks in, bringing the crowd to their feet as they dance their way back to the bar to pitch up camp for the rest of the night.