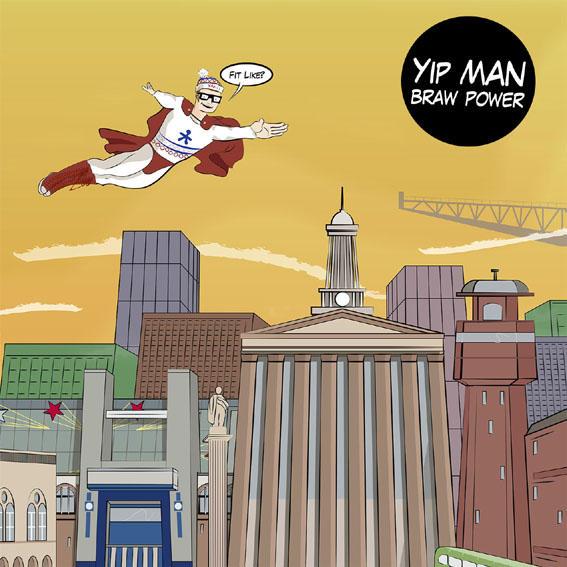 It’s a curious thing this listening to music malarkey, particularly when it comes to keeping up with the amount that’s so readily available these days. Who knew, for instance, that Le Reno Amps had split up five years ago? Not me anyway although I recall quite liking (& positively reviewing) at least one of their two albums. That said I can’t remember the last time I deliberately played either of them (or, for that matter, if any random songs have been thrown up by my iPod). They had their 15 minutes so what then of former frontman Al Nero, now performing & recording as Yip Man?

Graham Coxon’s numerous solo albums come to mind when you first put Braw Power on, particularly with the pace of second track ‘Not That Easy’. Nero includes a lot more proper organ, as well as keys, in his sound though so the more pop punk numbers on the disc gain greater depth, thereby recalling fellow Scots The High Fidelity. Elsewhere though ‘Silver Wings’ is reminiscent of Grandaddy. Plenty of indie touchstones around the place then.

Relationship pitfalls are amongst the subject matter, with boxing imagery used to good effect on the opener ‘Barnburner’ as well as the progress towards a break-up being the focus of ‘Kings And Queens’. Where the album is let down slightly is the song ordering. Having started off at an infectious pace it slows right down for the likes of ‘Taxi’ and ‘It’s About Time We Stopped’, although the latter makes up mostly in volume what it lacks in speed.

On the whole Braw Power’s an album that is worth a number of listens – it’s free of cynicism, doesn’t preach or try and ram any messages it may carry down your throat and, whilst having few if any hooky choruses or the like, you could well still find yourself humming a few of the tunes. As for longevity that’s in the lap of the Gods.

Braw Power is available from amazon.

Fantastic countrified punk rock, and much more, on this third album from the Glasgow quartet.

Starting off with a driving riff fit to grace a Reverend Horton Heat track, Le Reno Amps begin proceedings with 'Outlaws', nicely tying in with the cover picture of some highway robbery set to end badly. After this they would have to change the style drastically to snatch defeat from victory. Track two, 'If You Want A Lover', leans more towards the Calexico take on country but at no time does it plod along. 'You Do Your Thing' couldn't have been written by a band other than one from Glasgow - clear echoes of Teenage Fanclub trying their hand at the same thing or maybe even Garlic. Either way, a rollicking cheery number that puts the recalcitrant half of a dying relationship firmly in his or her place.

'Going Under' plants itself firmly in rock territory with big drum rolls when required and impassioned lead vocals. The strong backing-vocals that underpin a good many of the songs are also given ample space to fill out the overall sound. 'The Stand Off' maintains the rock ethic whilst also managing to introduce some synth burbles and end in a most metal grind out. Things get totally stripped back on song six though - 'Body' is all acoustic guitar, spare drums and harmonica in a very pleasant arrangement. 'Threads' picks up the tempo again and I'd be interested to know when the band last saw a tumbleweed rolling down Buchanan Street. 'Slow Decay' and 'Dangerous Boy' keep things stomping along, the latter being probably the edgiest cut of the 11 - definitely displaying elements of Joe Strummer or maybe even Manu Chao.

Finishing things off we get 'Send Me On My Way', a real thumbs-in-your-dungaree-straps knees-up of a tune, and lastly 'The Gilded Road' which verges on Secret Machines-like sonics at times. A genuinely great and varied release from a band that others could do well to learn from. Check out their home-made films for each track on YouTube too.