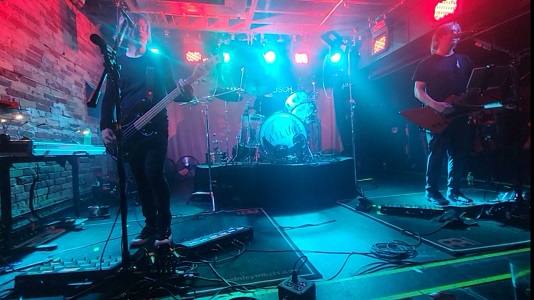 While in Toronto, Ontario a couple weekends ago for a conference concerning the human anthropological advancements and drawbacks within modern society, I was fortunately led astray for an evening.  So much of the day was taken up by lecturer after lecturer speaking on the positive effects us humans have had, and will continue to have, within our time on this fantastic planet.  It all became a redundant blur.  Clearly, an attempt to shine a light on the 'good news' of the day to comfort, when there is so much of the 'bad news' we are inundated with on a constant basis.  But I sought out to hear our shortcomings, our drawbacks, our failures.

I used the Google machine and searched "failure toronto" which resulted in an event at The Velvet Underground on the Sunday night.  Arrival for 7:30.  A brief documentary at 8:30, then followed by what appeared to be three gentlemen and a discussion on the topic of "Failure".  I hastily purchased a ticket and arrived in proper time.  While standing in line, I noticed the age of the crowd's attendants varied.  Some older than myself, well into their 50s, and with some as young adults.  Some even wore shirts that said "Failure" on them.  I postulated the three men must have some very unique insights on the topic of Failure because they clearly have a loyal following.

After walking into the venue, clearly named after Michael Leigh's 1963 paperback release (which gave me pause in case of unwarranted sexual perversions), the room was unconventional for a lecture.  There were musical instruments on stage, perhaps for a house band dedicated to the venue.  I purchased a spirit from the tattooed barkeep, a Roku Koori Negroni to be exact, and walked to the brick wall, waiting for our documentary viewing to begin before the host lecturers.

The documentary began with a young girl singing a sweet, lullaby-type melody with her acoustic guitar.  I thought this was an odd way to begin the viewing, but I figured the context would make itself apparent later on.

Which it did - but not in the context I was hoping for.  And I realized the night's event would be absence of a lecture, but presence of a rock and roll band.  A band named Failure.  How foolish I was!  How my research with the Google machine failed me!  How I mentally kicked myself for being too easily led astray!  I felt too embarrassed to leave after purchasing the ticket for admittance.  Do I regret staying?

The evening only further developed my education in contemporary music, of which a fresh experience could only yield.

The documentary provided insight into this band Failure, testimonials by what appeared to be known fans and fellow musicians and actors.  I kept note of their names as best as possible.  Interviewees like a foul-mouthed Tommy Lee spoke highly of their beginnings; a garbage person by the name of Butch Vig said how he still listens to the band's 1996 album "Fantastic Planet" in its entirety to this day; a tradesperson named Maynard spoke of his high regard and respect for the band, and praising the co-main songwriter Gregory Edwards.  Other interviewees described their music as a "loud, dull roars", their dynamics of loud and quietness, with sounds from a distant galaxy beaming to Earth embossed within the music.  But the drawback and failing within the documentary viewing was how the three men fell into illegal drug habits.  Obviously, this would strain musical output and the relationships of the members within.  My later research showed an end to the band in 1997, but reformed in 2014.  The long break between in the band's activity was reflected in my observation of the vast range of the attendants ages.  What appeared was a band, not quite well-known, but highly respected and maintained interest in the public discourse enough to garner not one, but perhaps two new generations of fans and followers.  "There must be something special here", I thought, "and I must seek it out".  The documentary viewing then ended but transitioned to an animated episode called "Space Madness" from the show "Ren & Stimpy".  Yes, something special must be here from this band Failure, even within the context of the disturbingly, unrealistic animation of domesticated, anthropomorphic animals in outer space.

As the cartoon was resolving its story, the band members entered the stage to much applause.  Then as the video quickly faded to black, then band did not so much punch into the first song, but sonically blasted into their opening song which I later found out is titled Submarines, from their latest record "Wild Type Droid" (2021).  Standing further back from the stage, mid-crowd, not one body was still, heads and shoulders moved to Failure's deep rhythms and along with the drummer's pummeling, care of Kellii Scott.  It was not just the opening song, though.  Track after track, song after song, my fellow crowdmates were continuously enamored by the performance and celebratory at the conclusion of each song.

The second loudest applause of the evening was when the PA system for the Velvet Underground popped and shut off half way through Bad Translation.  The trio had to take a moment, the singer on stage right, Kenneth Andrews, was not impressed - but luckily, the venue patrons were.  Impressed that their performance over-powered the PA, as if the electronic system needed a breather.  Brief cries of disappointment followed with a slow clap to an erupting crowd-wide applause, cheering Failure back on.  Kenneth walked up to the microphone to declare "Let's do that from the beginning." We, the people, agreed.

After playing for an hour or so, engulfing every dead space in The Velvet Underground, Failure went back stage, only to play peekaboo, and return with thunderous applause and cheers.  Kenneth stated the band would play some "older stuff".  In retrospect, I have come to find that the last six songs performed are the quintessential definition of what makes this rock band special.  These were the last six tracks of that seminal masterpiece of an album, "Fantastic Planet".  The music itself was haunting, but caressing; orchestral grandiose, but through minimal instrumentation; moments of delusion and depression, offset with a glimmer of hope; other-worldly, but familiarly human.  This was defining work.  This was artistic expression.  There was a high I felt that night, only trying to replicate it in the two weeks since attending.  I have come up short, only to obsess in the relistening of those songs in commemoration of their performance, the crowd singing along to The Nurse Who Loved Me and Stuck On You.  We heard their story of hitting life's lows, only to see them on the other side, stronger from each of the members' own failures.

I found Failure that Sunday night.  And their anecdotal music was not the lecture I wanted, but the lecture we needed, cementing their special-ness.