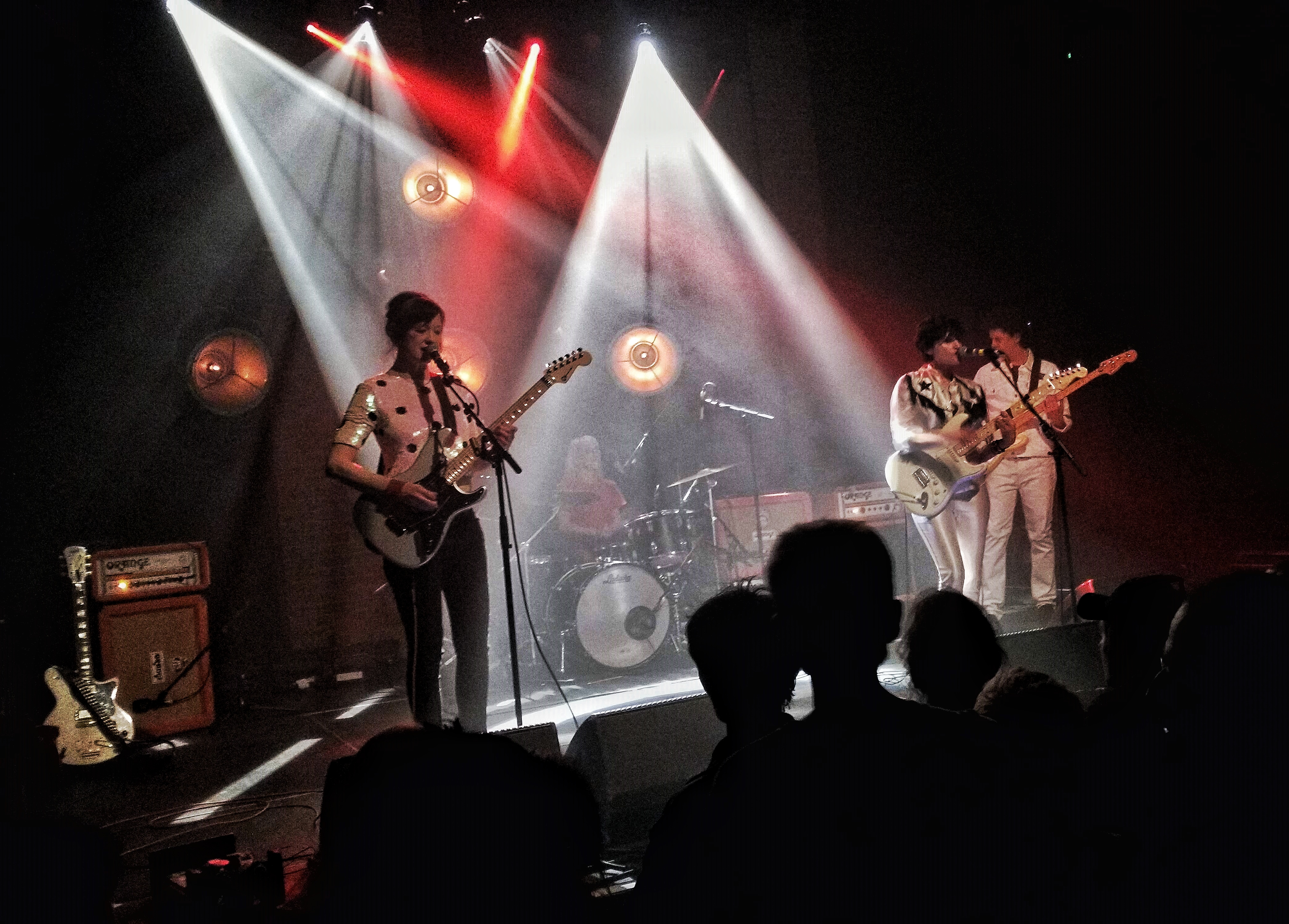 Tuesday evening, after a long bank holiday weekend of gigs, blacking out and having my phone stolen by some piece of shit, I head to yet another gig at the Village Underground.

Berries made me feel like I was secretly watching three high school girls playing Guitar Hero in their bedroom, the kind of girls who sit at the very back of the classroom with their headphones on, engraving “<insert teacher’s name> STINX” on the walls; not the drummer though, she looked like she’d carry a unicorn backpack. This doesn’t mean they sound like newbies though, they’re pretty damn talented and know how to get the crowd moving. The singer/guitarist constantly emanates this infectious and engaging feeling that she’s having a great time, whilst the bassist remains serious and cool, and then we’ve got the drummer … who’s shaking her pastel pink locks and can’t quit smiling like a shelter puppy that’s just been adopted, while banging the drums like a beast that’d shred that puppy into pieces, tiny pieces.

And speaking of drums, we move onto the next set. I watch in excitement as the stage is set up with two drumkits facing one another, I’m all hyped up about the previous band and can’t wait to watch more loud, crazy, thunderstorm drumming. My buzz dies as I see the performers climb onstage; they look like they sell delicate handmade jewellery on Etsy. I try to remain positive and stay at the front, but as soon as they start I realize my assumptions were right. They play softly and cautiously, for what feels like forever, until one of them starts chanting and it all starts feeling like a summoning of some sort. A Theon Greyjoy type guy (+100 cheeseburgers) at the very corner behind the speakers (he can’t even see the band), begins headbanging like he’s having a seizure and doesn’t stop until the performance ends. There were a few more intense parts that reminded me a bit of Islet, but overall it really wasn’t my thing.

As I wait for Ex Hex (@exhexband) to finally get on stage, some tall inconsiderate piece of garbage comes to stand right in front of me, so I release a silent but loaded burp and blow it his way. The lights go off, I sneak in front of him and the crowd starts screaming in excitement.

Ex Hex hit the stage like when someone runs the curtains open after an entire hangover morning of eating leftover fried chicken in the darkness and comfort of your bed, brighter and louder, WAY louder than the rest of the bands. RIDICULOUSLY LOUD. I start wishing I’d brought earplugs, and I remember those I saw earlier hanging from the photographer’s neck, covered in yellow wax and hair. CLEAN YOUR EAR HOLES FILTHY. Back to the show, Mary Timoty looks like she’s just been crying backstage and is ready to actually hex an ex. Betsy Wright’s rocking a shiny white western fringe shirt, matching with the bassist. And Laura Harris is there in the background, almost invisible due to the smoke and lights, wearing a rather casual red outfit like she forgot they’d all agreed on white.

They deliver an astonishingly vibrant and energetic performance song after song, going through their first album and the more recent It’s Real. The crowd, mostly formed of +50 tall bald gentlemen, loses it to 'Rainbow Shiner' and 'Cosmic Cave'. Two women close to me (both dressed like Brett Anderson), start moving side to side together to 'No Reflection' and everyone joins them. The old man at the front, in his military jacket full of patches and pins (he’s at EVERY gig) has got a massive smile on his face. It’s a weird mess in there but everybody seems to be loving the gig and having an amazing time. I’d say make sure you catch them while you can in their remaining EU tour dates.

Conclusion:
1. Ex Hex were brilliant and they went waaay over my expectations.
2. Drummers are weird.
3. Pro shark week tip: You won’t give a shit about your cramps at a great gig. If you do, it’s either not good enough or you’re not dancing hard enough.