No September review folks as someone at the pressing plant or Flying Vinyl HQ left my discs for that month shrink wrapped so they're up for sale in mint nick, much as I think I like Kagoule and a couple of the other discs actually looked interesting. If only I could download the tracks to find out ...
Anyway, October 2018 instead and first up are Black Honey, who I think I disliked last time they featured in a box. Apparently they've "stormed the charts" since then, which says a lot about that institution and why many people pay no attention to them. 'Blue Romance' passes by barely noticed as I'm typing the above and 'Crowded City' isn't too bad, in a Gwen Stefani-like way when it cuts loose but outside of those bits it plods. The band's site shows them to be touring Europe & England over the summer.
Nancy get a nice purple vinyl disc for the oddly wobbly 'Teenage Fantasy'. Think Tame Impala and you'll know what to expect. The B side just features a remix of the A side so nothing very special overall. Facebook shows the band are still active.
Elle Musa has a nice voice. 'Lime Green' is pleasant, in the singer-songwriter vein. It could though be any number of falsetto-voiced folk singing and strumming away. It's also a very short song. 'Rosa & Henri' adds a piano to the mix and things come over all Amelie OST. Pleasant. Facebook advises that Elle now has an album out.
Mint (this week's other act who are likely hard to find online) hail from Grimsby and are another act seemingly styling themselves on The Wonder Stuff, if their photo's anything to go by. 'Nothing Seems To Get Me High' is a pretty good track in the thumpy/shouty vein of rock. The band have elements of The Hives in their sound but, as seems to be the case often with songs in this column, the track ends too soon. 'Superglue' chugs along at a good pace but there's a comedic element about the band's sound which makes it hard to take the whole thing seriously. Maybe that's the point - they're here for a good time not a long one. Overblown solos abound but this time the unexpected ending is pulled off fine. Have a click on the band's site to see what they're up to at present.
Blood Red Shoes are an act I'm surprised to see in this box, thinking them a bigger act than would need the association. Here they are though with 'Mexican Dress' and 'Beverly'. Our regular contributor (and instagram guru) Steven is a big fan of the duo but I've never been bitten deep by their work. This single seems unlikely to change that. The A side is efficiently melodic and a bit dark with a tune which, if heard repeatedly might be something you'd find yourself humming snatches of. As I'll only be playing it once that won't happen here. 'Beverly' goes down the moody & slow route. Fine if you like that kind of thing but I don't get past halfway. The web shows the duo are touring Europe & the UK from now until the end of November.
Read more... 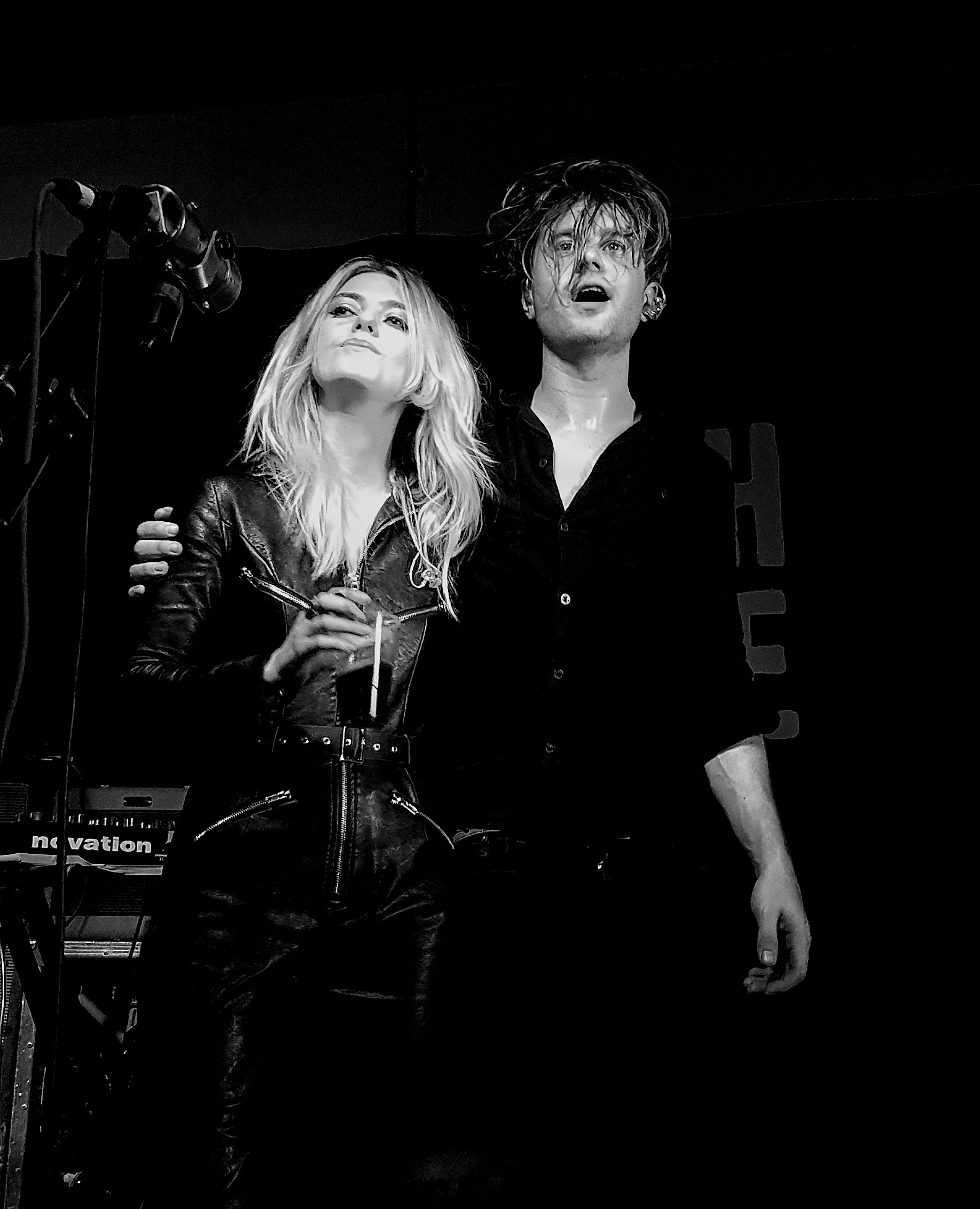 Skulking about Brick Lane a few weeks ago, taking in some new street art with salt beef bagel in hand, the graffiti leads us towards Rough Trade East. Grabbing a (reasonably priced and proper) cup of coffee the caffeine is quickly ingested and slinking about the aisles commences. The main objective, as always, is the giant in-store gig board at the back. A quick scan showed that Blood Red Shoes were playing a gig in a few weeks. Most excellent. An exam over the weekend prevented attendance at their sold-out London gig just this past weekend, but Musos' was going to try and worm their way into this event, but how?

Lady luck must've been sweet on us that day because on our instagram feed we saw that BRS were holding a pop-up listening and swag give-away event to celebrate the release of Get Tragic (25/1/19), their latest album, just around the corner from our dwelling. Rolling up to Mary Wyatt London there was a queue out the door, it was only 4pm. Once in we were given a tote (contents: 1 Beer tin of, 1 Polaroid of Laura and Steven in nerd poses, badges, stickers and caaaaandy) and left to wander our surroundings, think house party vibes with merch. At the back of the shop Steven was tending bar pouring wine out of an emerald green carafe for thirsty fans while Laura circulated and mingled with the crowd.

While the carafe was being replenished we took our opportunity to hit the bar for an audience......and a drink:

Disclaimer: This conversation is paraphrased, it was an open bar and in hindsight my recollection might just be a tad bit hazy. Additionally, I never sound this composed in real life. Factually, it's accurate, to the best of my recollection:

Cpt: Hey man, congratulations on your album release, it's been a long time coming. I'll take a splash of wine when you get a sec.

Steven: Thanks a lot! One wine coming right up.

Cpt: A few months ago you did a pretty big share on the instagram leading up to the release of Get Tragic talking about what went to putting this album together and making it come to fruition, we think fans really dig the look behind the curtain into the process, not everyone's always into sharing the downs along with the ups.

Steven: Yeah, we thought, fuck-it, 5 years is a long time and we went through a lot of ups and downs to put it together and we're really proud of it so we're going to talk about it.

Cpt: Couldn't agree with you more. Listen, I've got an exam this weekend and can't make it to the already sold out London gig but saw that you're doing an in-shop-gig at Rough Trade East and were wondering if you wouldn't mind having us write a few words?

I think my second favourite type of venue for a gig, outside of cramped dives which is the only way to hear new live music, is in a record store. Sure, the sound and atmosphere aren't as mental and you won't get the fear of death put into you from an impromptu pit forming around your person coupled with the spray of beer and human DNA going everywhere but it's where music lives. Gigs here are like free samples at the super market, it's not a meal but we've all gone back for seconds (and thirds) once we've gotten a taste for it. It's about 45 minutes before their set time and there's already people in front of the stage 3 rows deep, 45 minutes later the shop is packed, the lights go down and the band comes out.

BRS is traditionally a duo but with the new record comes growth; the duo turned quartet now has 2 new members. Playing support percussion and keys we've got James (TigerCub) and on bass, Hannah (2:54) who're the new additions to the BRS family for their current touring season. 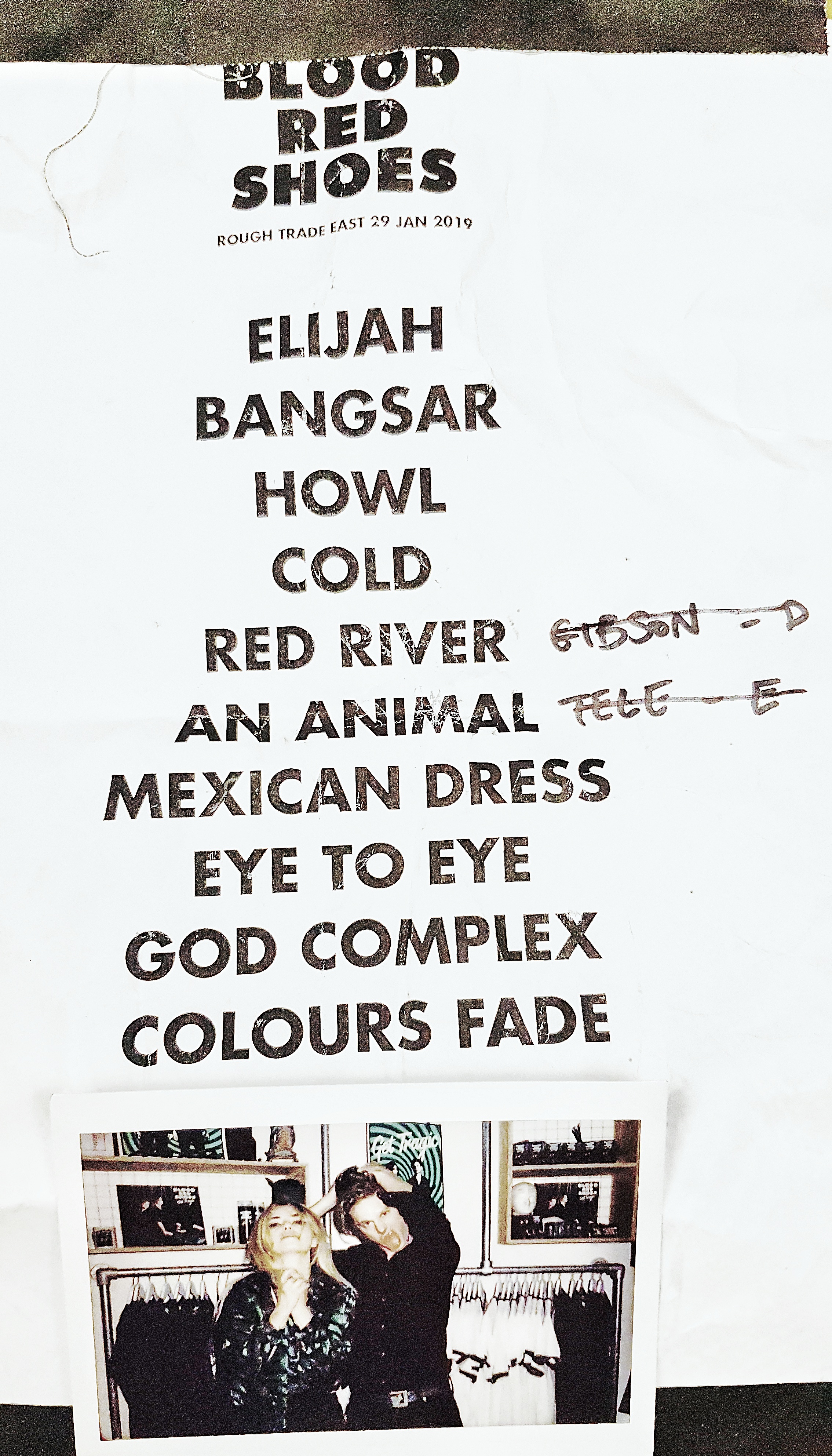 If you haven't heard Get Tragic yet there are some bangers on there, more than a few, but for now let's talk about the gig as this isn't an album review. The set starts off in classic Tarantino fashion with 'Elijah' the last song of their new album, first. The best way to describe this song is to imagine it playing on the radio of an autonomous murder car on its path of destruction through a densely populated city at night leaving shattered souls in its wake. It's a dark and unhurried juggernaut of a tune, overbearing and large in all the right ways and certainly sets the tone for the new chapter in their career. Although the biblical names like Jezebel and Elijah really don't do much for us (played out across all of Rock 'n' Roll) the lyrics feel eerily semi-auto-biographical in terms of the album, and duo's, turbulent history:

"I heard you fucked up again, Elijah

One day you're up then you're down in this old town

and everybody around, confounded."

This is, for us, hands-down the best song on the album. Live, this track and the rest of the set, you're just left enveloped in these intense thick swelling velvety tones that you'd think you were trapped inside the Black Lodge, inescapable. Steven and Laura have been touring these new songs for a while now in anticipation of finally releasing Get Tragic. Two years ago, another sold-out show, at the Oslo we got a preview of what's to come. 'Eye to Eye' and 'Bangsar' were revealed during an encore. They were playing the tracks they couldn't release, all we kept thinking was how much bigger and louder they were with the addition of new members, distortion and reverb backed up with bass and electro tones.

Back to the present; the track ends and the past has caught up with us. Laura's Fender with emerald pick guard is bumped and bruised with chips in it, Steven's drum sticks look like they've been put through a cheese grater, they were new 5 minutes ago. A sign that tragic times might've been in their past but now it's time for the getting. Through the 15 years they've been together with all of their ups and downs, they've still got a lot of love and sibling rivalry type banter. Steven wants to get onto the next track and starts tapping the hi-hat, Laura moans she needs a drink, Steven taps the hi-hat faster as she reaches for her vino confiding in the audience about Steven's extra large toe on the hi-hat rather than his foot coming down on it, 'aw mate!' is all he can muster in rebuttal. Digs and laughs aside that show and each one that follows always end the same way, not with a tried and tested encore but with the duo in an embrace cups (often times bottles), raised in salute to their audience members who've stuck with them through the years, 'buy our album' Steven says, 'so we don't have to get real jobs and to get our parents off our backs'. 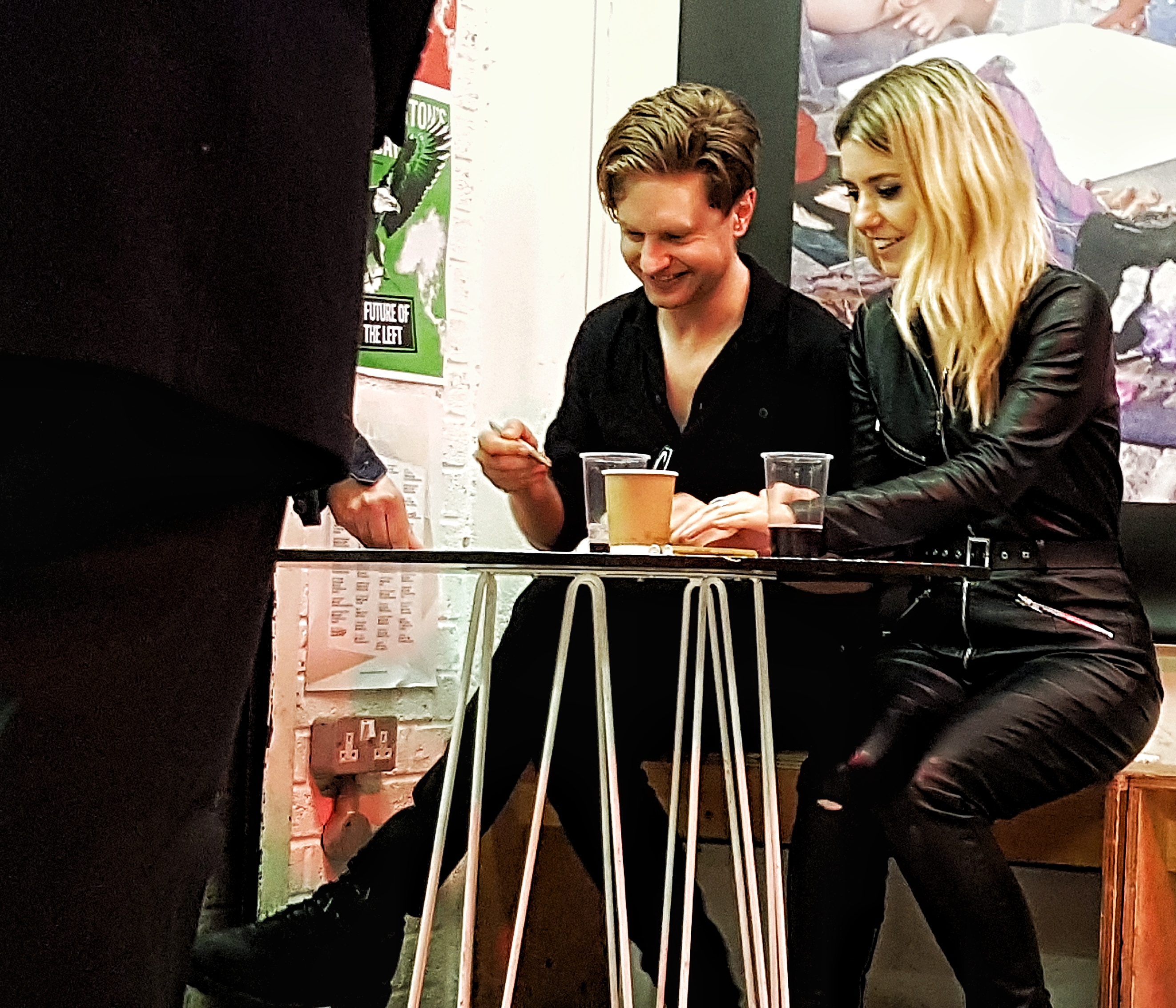 Recently having toured with Alice In Chains, a new album creeping its way up the UK Top 40 (unbelievably a first in their career) and a whole slew of tour dates coming up over Spring, Summer and Fall BRS are on their way up and bringing their fellow Brightonians in their local music scene with them. Their set ends with 'Colours Fade' but we would've preferred the second last song, 'God Complex' instead. Laura and Steven meet center stage and thank the crowd, announcing they'll be signing merchandise at the back in a few minutes and leave the stage. I hang around to grab a set list and as I'm about to tuck it away a wolf like man approaches me with a piece of carry on luggage in tow, 'can I take a picture of this set list? I've never heard of this (not a typo!) Blood Red Shoes before, I'm from Germany. I want to find their music and tell my friends'. Looking rich, well put together and totally out of his element he must've been pulled towards the cliffs by the sirens I figure and wandered in off the street. I agree and he takes the shot with a smile on his face. We part and I make my way towards the exit to hopefully snap a pic of the greet-n-meet. The queue runs the length of Rough Trade, I get there as the first fan (a regular looking suburban lady in her 40s) hands Steven and Laura something to sign. With the look and smile on their faces you'd think their endorsing a check to themselves for millions of pounds but they're just making a fan's day and it's absolutely fucking adorable.