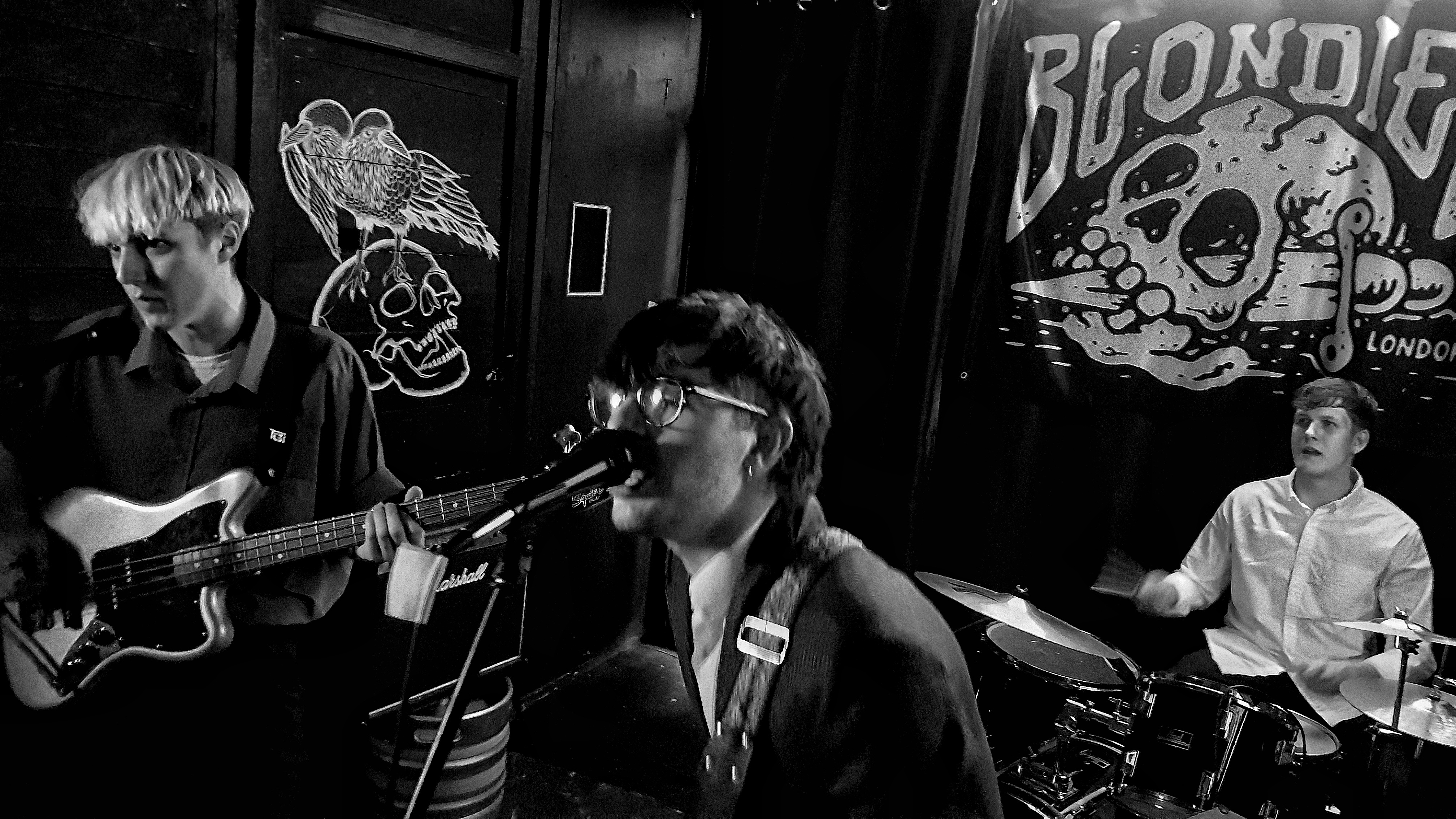 Outside The Social last Friday I've arm-locked Be Good's Ash into having a pint with me when the latest re-incarnation of Dr. Who walks by I'd later come to know as Alfie, frontman of Lacuna Common. Ash struggles trying to explain L.C.'s sound as he introduces him which I take as a good sign, I'm now curious.  'You should come check us out, we're at Blondies next week' he says from behind a pair of unsuspecting spectacles, I accept...suspectly.

I pull up to the East-End dive where Sharmaine, one of three sisters that run the joint, is behind the bar. We're greeted with a sweet hot smile and an ice-cold pint. Chilling in the garden the place fills, swelling up with sweaty bodies pretty quickly. Leaning against stacks of upturned stools while the ice-machine beneath me plops out cubes, distorted thrashing coming from the speakers inside, that's our cue. We cram our way to the front where three-headed beast Alfie (Guitar/Vocals) Tom (Bass) and Gabe (percussion) dig in blocking the only fire-exit with a wall of flesh and sound.

They kick (literally anything kickable within leg reach) jams out from a muted but power packed set which neither Tom or Alfie can sit still through. Tom throws his bass in one direction while his feet go in another.  Alfie's pushing and thrashing his way into and back out of the crowd while simultaneously asking them to get closer. Gabe's in the back but wants to get out there too but unfortunately for him they've had to shackle him to the kit for just that very reason. Know your role drummers! From their eight song set five songs cut deep. 'Zacharia' was described as a track about a night out that went wrong. I feel a more apt description would be about a night out that went wrong and then the music that followed was the soundtrack to said night(mare) playing hard as it chased you relentlessly through the streets thirsting for your blood.

'Tucked-In' and 'Sensibility' all have lo-fi scuzz rock written all over them but they've also got these hooks in them that carry shattering and piercing projectiles that scatter in every which way (most of which get into your eyes but also your ears) making the tracks completely unpredictable. I like groups that've got variety in their repertoire as much as the next guy but unpredictability within the track itself?  That's my jam, it's easy to see now why the tongue tied description of their sound was the best description of all. You'll hear echoes in the vocals from the likes of early Arctic Monkeys but that's where the similarities between others end.

The set finished off with 'Under The Lamplight' and 'Not The Same' which are two tracks currently out on their latest vinyl release 'which you can buy from my Dad for a fiver in the back' Alfie muffles into the mic. The songs are a good indicator of the direction the trio are heading in next with a little hard work, effort and luck. Graduating from high school house parties under the lamplight with your mates towards University Towns like Oxford, that the band calls home, and towards bigger venues like the festival circuits. 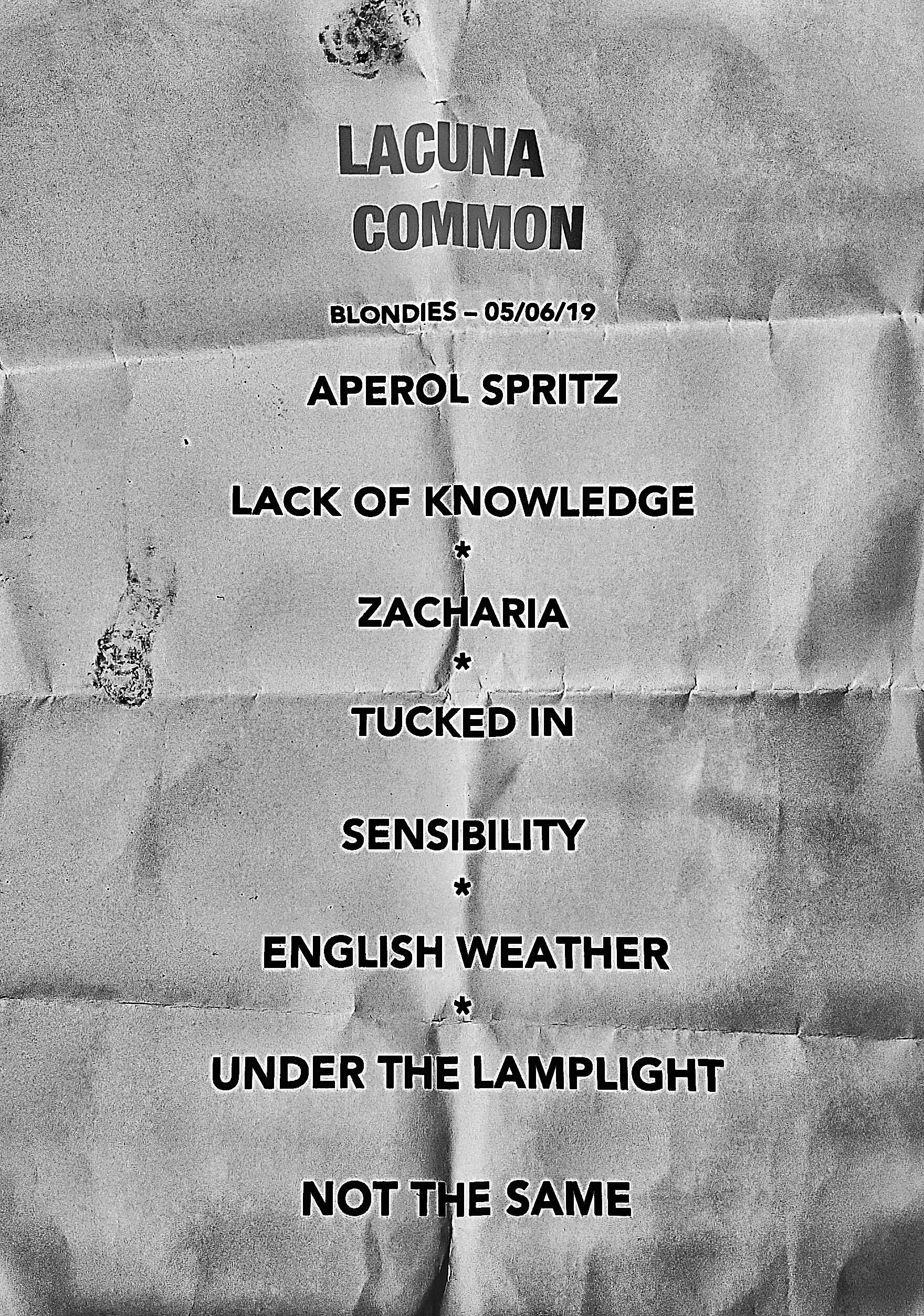 I caught up with the guys outside for some fresh air as they smoked cigarettes draggin' one of the upturned stools between us, the ice machine, and the caved in sofa Gabe was currently perched on to start recording. The boys were still full of energy and positive vibes and had a lot of fun during the interview which made it fun for me. It was hot, overcrowded and stuffy so I'd like to say an extra special thanks for taking the time.

Cpt: So I'm by the bar ordering a drink and I hear the bartender ask this woman getting her next beer how her day's been. She says, 'oh you know, I'm having a sort of miss your mouth sort of day today'. The bartender doesn't process this and just offers up an 'oh-yeah' while the words make another round in her noodle pressing her to stop and say, 'wait, whaddaya mean?' 'Well, I was in an important meeting and I went to grab a sip of my drink, missed my mouth completely and ended up pouring the entire contents of the glass all over myself.' So I guess my first question to you is do you often have, 'miss-your-mouth-moments' and what have they been like?

Alfie: Yeah, like about an hour before our set, in the pub we were at, where we at?

He seemingly says into the ether, an echoed reciprocates an answer from the band's unofficial autobiographer.

Alfie: Completely poured it down my chin.

Gabe: What's the worst time you can do that though?

Cpt: That's actually my question to you.

Tom: On a date is pretty bad?

Cpt: On a date, isn't that, endearing?

Alfie: What about a Christening? That's pretty bad.

Gabe: Dropping the baby? That would be even worse. We've gone straight into it.

Cpt: Okay, I'm going to try and pull us back. Fastest things on 4 legs you can outrun, you can't say shit like frog or tortoise or anything fucked up like that.

Gabe: What about a hedgehog? Those things are rapid!

Alfie: (a bunch of words I cannot make out on the recording) dog, I can probably outrun him.

Tom: Uhhh, can you come back?

I'm about to get to Gabe when Tom has an idea:

Tom: A badger, I reckon I could outrun a badger?

They find this statement hilarious but apparently none present have gone down the YouTube rabbit hole of badger videos.

Cpt: They're fucking crazy man, do you know what they do? They eat snakes! They get bit, their body metabolizes the poison while they take a nap, they wake up and they find the snake that bit them and eat them. Leave them alone. For your own well being.

Alfie: I say I can easily outrun the new Catfish And The Bottlemen album, if it had legs!

The band falls into hysterics but I've heard something different in person than now on playback.

Gabe: That is the best answer I've ever heard.

Cpt: Any what, cafeteria woman?

They all repeat Alfie's words to me but I cannot comprehend what they're saying properly so I continue on with a sense of bravado that makes my mishearing sound confident enough to go unchecked. It works, thanks Picard.

Gabe: Although, I do feel you could outrun any cafeteria woman because of their aprons, you know, constrictive, isn't it?

Cpt: Yes, there is that but also the footwear, those crocs are as useless as they are an eyesore.

This guy, this guy is stealing my light. This is my time Gabe.

Cpt: Okay boys, this'll be the last question because I end up hearing my voice too much on playback and it's way too weird hearing your own voice all the time. Uh, which I guess you kinda already know as musicians.

Alfie: Yeah, try being in a band

Alfie: Now we get a crate of warm beer and some water. Dream rider would be like, Kahlua?

Gabe: THAT'S SAME FUCKING THING I WAS GOING TO SAY!

Perfect timing brings our interview to a close as Sharmaine comes out yelling (clearly on the recording it was so loud) 'sorry guys gotta bring everybody in now' bringing our interview to a close. Head out to see a Lacuna Common at their next gig but make sure to bring pocketfuls of eucalyptus leaves because you never know right?