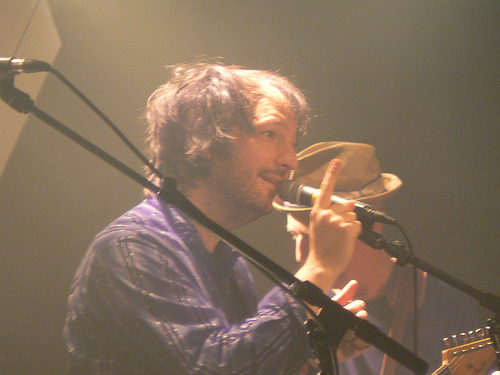 Things start early at Le Guess Who? on the final day so I find myself part of a respectable sized crowd (bigger than normal he reckons, if you can believe that) to see Kelley Stoltz in Ekko at 4pm. As a definite fan of the man’s work I’m obviously biased but I’m happy to name this as the best gig of the weekend. Not only do he and the band play songs from across his career (new material such as ‘Litter Love’ and ‘You’re Not Ice’ slotting in fine with the superb Double Exposure material and earlier tunes) we’re treated to ‘Hot Igloo’ and ‘Don’t Let Your Dreams Die’ from his Willie Weird alter ego, a minor Leonard Cohen/Pink Floyd mash-up and some amusing banter, anecdotes & philosophising. If he could actually have remained on stage for the three hours he joked about I’m sure everyone would have stayed put for the duration, such was the level of inclusion and entertainment on offer.

Jacco Gardner was curating the programme in Pandora today so a look in at the chiming charms of Eerie Wanda was possible. Crowd sizes generally were on a par with Thursday & Friday today so the hall wasn’t packed out but there was a good level of appreciation for the band’s whimsical and mildly psychedelic output. Fans of a poppier take on the psychedelic side of things could head to the Ronda where Byron Bay's The Babe Rainbow (looking and sounding a tad out of place beside the rest of the weekend’s bill) were dressed to impress and giving it their all. Pandora would though probably have been a better setting for them to do it in.

What festival goers there were on the day clearly knew who they wanted to see so public areas were far less congested but bottlenecks did develop due to the smaller number of performances on the slate. As such it was impossible for me to see Follakzoid once I got back to Ekko. There was queue out of the gig space into the bar so, making it a point never to queue, I turned tail back to the Tivoli to pass the time before the second of the shows I was personally most eager to see – Mikal Cronin (with added horns & strings).

As part of his chat Kelley Stoltz had referred to Cronin and himself sharing a resemblance and having seen them both in the space of a few hours I’ll admit to there being a bit of a “separated at birth” thing going on. Cronin has far less chat but then as it’s the first time he and his band have been augmented by violins & brass there’s probably more to concentrate on than usual. In all there a dozen players on stage and the Ronda hall does full justice to the fuller sound produced. Final song ‘Change’ was the one I was expecting to really resound with the extra instruments as it’s exciting in recorded form for that very reason but throughout the set you were constantly being reminded of how expansive Cronin’s creations actually are. Great garage rock it may be but his talents for arranging and incorporating more traditional instruments cannot be underestimated. A further great show raising today to the top of the weekend pile.

Jacco Gardner naturally caused one of the regular Pandora access issues but we were lucky enough to have had five minutes or so to steal a march on the latecomers. As mentioned in an earlier piece the hall was prone to tech issues over the four days and so after the first song of the set there came a bit of a gap as pedals were plugged into each other in a different order so as to nullify a persistent buzzing. After that delay though the set progressed as you’d expect and there was a greater sense of band/crowd interaction than when I’d previously seen the show at the Liverpool Psych Fest. For all his falsetto and supposedly fey attributes the live setting fully allows for the darker elements of his work to shine, in keeping with the Giallo imagery associated with the Hypnophobia album.

More tech issues mean the start of the Ariel Pink show was delayed back downstairs in the Ronda. Some people were getting very stroppy about not being able to hear either their own or other folk’s vocals. That finally dealt with the first song upon returning to the stage contained the word goodbye a lot so, coupled with the trashy rear projection, the surrealistic nature of what was in store was readily confirmed. Dancing was certainly possible as the underlying funkiness of the bulk of the songs was very to the fore but, possibly due the theatrical element referenced by that projection, there was an air of the band going through the motions with its leader in his little baffle pillbox conducting proceedings and occasionally playing his duck whistle. A fun performance but one lacking warmth. 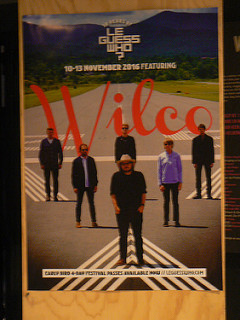 Jacco Gardner’s Cabinet Of Curiosities contained as it’s crowning glory Os Mutantes. Re-discovered in the Nineties after decades of cult (if any) following outside of their native Brazil they put in a performance that at one and the same time managed to give the impression that they had all the time in the world, whilst that they were also keen to make up for lost time. An impressive feat and one that causes you to wonder whether those acts witnessed who’re supposedly in their prime will have the desire (or even the fan base) to manage the same. Yet another good addition to the list of older bands Le Guess Who? has scheduled over the years.

The festival returns for its tenth year on the second weekend of November 2016 with Wilco confirmed as the first headliner. Early bird tickets are available for just 92.50 euros here so do yourselves a favour and plan ahead.