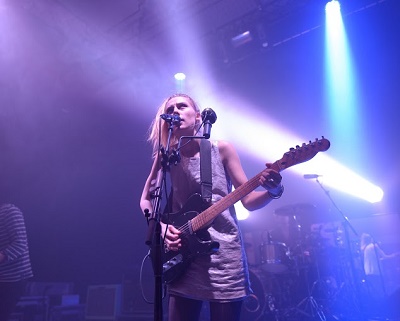 Still yet to release their debut album Wolf Alice are currently doing the rounds on their biggest tour to date, that said the album is pencilled in for release in the not so distant future. So our expectations are rather high for this evening's encounter, yet there’s a healthy support roster too.

We arrive in time to catch Brighton’s newest exports The Magic Gang, with a debut single produced by of-the-moment producer MJ of Hookworms and as such expectations are automatically raised; the reality is however, they lack a little excitement yet they go down impressively well with tonight’s interesting demographic.

For us its all been heard, seen and done before, though we’re certain that they shall soon penetrate the cultural zeitgeist. We may be wishing that we could take these words back, but for now we'll stick to our guns and prepare for this evening's exciting headliners.

The lights dim and the smoke bellowing out filling the venue, they waste no time in laying into opener 'Fluffy'. An ironic name many may say as Ellie serenades the heaving crowd; the excitement gearing up when comparing this to the last time they graced a Newcastle stage: the band are packing even more firepower now.

Their set has obviously widened and they’ve honed their sound, it's now tighter than ever, as Joff bounds around the stage like an over excited puppy yet fails to miss a note. In my mind they need to be careful that their on stage theatrics don’t overshadow their utterly brilliant music.

Early on they play 'Your Love’s Whore' and it is a particular favourite, its monolithic sound and heavily reverbed vocals fill the room. Ellie delivers it perfectly its an epic rock song, a corker to have in your arsenal, that is a constant theme throughout the set tonight. The band's sound has really filled out, yes it's polished but it has really brought the bands best side out.

'Soapy Water' sees the band showing a slightly different side, the spiky guitars are reduced allowing an entirely different sound to break free. One that is very welcomed in what is otherwise a phenomenal onslaught of guitar driven rock music. As the set closes out 'You’re a Germ' sounds unbelievable and is arguably the best track of tonight, its power and wall of guitar is crazy yet they hold it together so well.

The band are welcomed back to rapturous applause, the crowd only have one track on their minds at this point and Wolf Alice don’t disappoint with a rabble rousing roof raising version of 'Moaning LisSmile'. There couldn’t have been a better way for these guys to close out tonight's set. As they leave the stage we know this is one to savour as it’ll not be long before these guys are playing much larger venues.