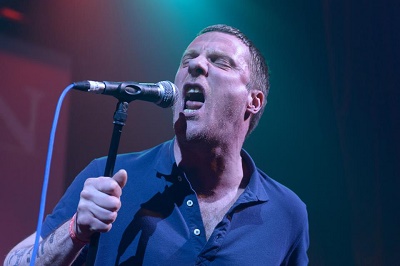 Sleaford Mods are like Marmite to say the least. For some they’re one of the most interesting, forward thinking and exciting acts around right now. Others? They don’t seem to get what it is all about. For us, we fall firmly in the former bracket. These two guys are speaking out for the working class and it shows tonight, as this backwater venue is rammed to its rafters and filled with angst and cheap lager. They’re definitely a band of the people.

Arriving fairly late due to car trouble, we catch part of Interrobang’s set. The project of former Chumbawumba lead singer and drummer, it doesn’t set our world alight, though that may be because the excitement of seeing Sleaford Mods is clouding our judgement somewhat, but either way, we struggle to get into them.

On another day, this would almost certainly have been a lot different, but unfortunately tonight is what it is for us and as they leave, the stage it is cleared and all that is left is a sole microphone and a couple of beer crates with a laptop atop them but, as the guys themselves hang around the venue greeting every fan who is willing to approach them, we’re struck by their friendly off-stage personas.

However, with Jason Williamson once the beats start playing and he takes to the stage, we’re faced with an altogether different proposition. His snarling delivery of these intricate spoken word pieces is jaw dropping, there’s ferocity to his delivery, a real anger, a pent up angst that is only let out on stage. Whilst the beats back up these anger filled tirades, you struggle to notice them over the man who’s taunting the crowd with every word that leaves his mouth.

Yet the crowd are besotted as Williamson wanders around in a circle during the instrumental parts of some of the tracks, waving in a camp manner towards his adoring fans. There is a deeper meaning to these tirades though, tracks like 'Jobseeker' are prefixed with quotes like “you’ll all know this one, its your morning tomorrow” before going on to recite his encounters with the job centre, Hilarious though they may be, they’re wholly real to so many. 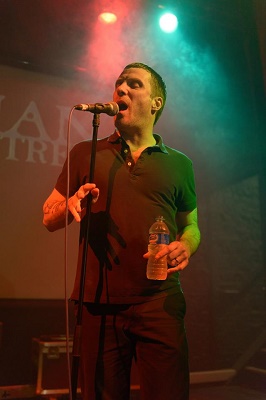 Sleaford Mods pull very little punches as you would expect, not wanting to turn this into a political exploration of their work but there are undertones throughout the set. Only one is made explicit though, as they launch into ‘Tweet Tweet Tweet’, a punishing demolition of a prominent political party.

‘A Little Ditty’ goes down particularly well though, as does the ever brilliant ‘Tied Up In Nottz’, their set feels like a whirlwind of intensity and excitement; their power and influence clear from the outset, they’re using this stage to promote a number of messages. It's understandable why a lot of people don’t get them, they’re not your typical ‘band’ and as we watch on tonight we take a moment to re-consider Sleaford Mods.

Yes they aren’t your average run of the mill, landfill indie nonsense born initially from teenage angst, before being moulded into a record company's vision of the next big thing. To us they seem like hard working decent people, from their interactions both on and off the stage, they’re passionate, keen and, more to the point, approachable decent people - something that is seldom seen in today’s music industry.