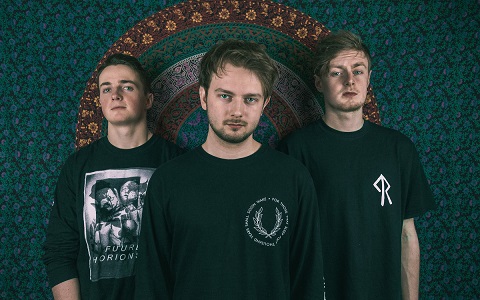 Welcome to the second installment of Musos' Guide's monthly (mostly) math-rock column AlgoRhythms, coming at you this time with a bit more of a "What is this about?" approach after last time's platform for flaunting my music taste. So, what is this bizarre genre to which this page of the internet is dedicated? Well, according to the infinite wisdom of Wikipedia it's "a style of indie rock that emerged in the late 1980s in the United States, influenced by post-hardcore and progressive rock bands, characterized by complex, atypical rhythmic structures bearing similarities to post-rock."

My taste for this music stems from those irregularities and intricacies, which lends a sense of engagement when listening, as the layers unfold listen after listen. Starting with the quirks of Foals' debut album and delving deep into the frantic math-core of Rolo Tomassi and The Dillinger Escape Plan, the road has been frenetic and interesting. However, it's the invention and optimism of "math-pop" bands like Signals. and The Darien Venture that really sparks my imagination.

Below are a list of bands I would consider vital to my induction into this style of music, topped off with a new track from Manchester Orchestra for good measure. As my first choices weren't available on Soundcloud, I've included one track for listening now and an additional, ideal suggestion if you're looking for some "further listening" or "homework" whatever on this mathematical journey. But for now, waffling over once again, and time for the music...

Biffy of the Month: 'In The Name Of The Wee Man'

This track, like a lot of the band's b-sides in recent years, is a taste of the "good old times" in the present day. Cutting through the pop-rock anthems for which they are now known and renowned, this track harks straight back to the Beggars Banquet trilogy with its raw and visceral nature. Yet, the song is still absolutely massive before it descends into madness and Simon Neil's feral screams make a welcome return to close out studio album #7 (Ellipsis). That slow burn into a ferocious closing is undeniably cathartic, and tracks as exciting as this are why Biffy Clyro are one of the biggest names in UK rock music today.

Whilst the disjointed and angular roots of Antidotes makes it my favourite Foals album without question, 'Mountain At My Gates' is a killer track from their equally killer most recent record What Went Down. You might notice that the "build to an impressive something" theme here, which is pretty much story of those awesome loud-quiet dynamics. This track in particular is full of guitar and swagger before that understated "solo" picks up the pace and Yannis Philippakis' shouts get slightly more unintelligible and soulful.

Again, it's that bizarre debut record (The Fall Of Math) that really resonates with me, but over the years since 65daysofstatic (pictured above) have really made a name for themselves alongside the likes of Mogwai as one of the instrumental musical behemoths. Most recently they've provided a soundtrack for the video game No Man's Sky featuring an array of expansive and energetic tracks like 'Red Parallax' to capture the game's vast and engaging nature. This track instills a wonderful sense of purpose and wonder into the listener.

Embed doesn't seem to be working, so the Soundcloud page is here.

The artwork of Gloss Drop enticed me into the music of Battles, and their mystical powers of composition still enthrall me. 'The Yabba' was the first track released from latest album La Di Da Di and is somewhat jarring with its meandering pace and direction (the music video is likely to confuse also). Walking that line between math- and post-rock, song durations stretch out, and so clocking in at just under seven minutes this track is going to divide opinion between those who "appreciate the art" and those who are a little more wary of the style.

4. American Football - 'Give Me The Gun' (I'll See You When We're Both Not So Emotional)

American Football's self-titled debut record is arguably the modern math-rock record, with its lush and intricate composition setting the path for pretty much everything that followed. Yet this is a band I somehow bypassed until I was already at the heart of the party, and then the self-titled return to the fray arrived last year and affirmed their status. Equally tender and beautifully poised, tracks like 'Give Me The Gun' serve to showcase the band's talent and deft of touch in composition as layers of emotion and instrumentation interweave to strike the perfect tone.

Returning to the "building to something awesome" theme, this track is a prime and straight-up awesome example of loop pedals and crescendos. As the layers and tension build you can sense that dirty guitar chord break minutes in advance, but it's still satisfying when it hits. Like American Football, Brontide have that intrinsic ability to compose music which is simultaneously free-flowing and complex. Two records in and their brand of pop-tinged instrumental rock is up there with the best you can lay your ears on.

6. Manchester Orchestra - 'The Gold' (The Alien)

Finishing with something more on the "indie" spectrum we have the phenomenal Manchester Orchestra, who released the arguably perfect track 'Shake It Out'. Ahead of new album A Black Mile To The Surface which is released next month, they've released some tracks to remind us of the powerful and emotive nature of Andy Hull and company's songwriting. As 'The Gold' saunters along, it gives all the flavours of a stadium anthem of the future, and like most songs by this band that feral edge lingers under the surface.

Thanks for your attention for another month, and catch us in the same place next time. If you have any suggestions of any kind, musical or otherwise, please just shoot a nudge over to @kj_mccormick and I'll be happy to chat it out with you. But for another few weeks, have a lovely summer time and...