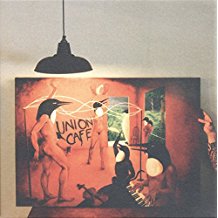 The Penguin Cafe Orchestra was the brain-child of the wildly, musically adventurous and talented Simon Jeffes. His detailed, complex and intriguing compositions were ahead of their time, with elements of found sounds, tape splicing and unusual instrumental combinations forming the music.

On any one of the Penguin Cafe Orchestra's albums, you had everything from melodic instrumentals, to sound-scapes that were unique, using everything from water, milk bottles and telephones to make the sounds required. Union cafe was the last album that Simon Jeffes wrote, and it is being re-issued for the first time on Vinyl for the twentieth anniversary of Jeffes' death. The Penguin Cafe name was recently revived with Arthur Jeffes, Simon’s son, taking his music on the road with the required number of musicians and technology to give his father’s work justice.

So, over the course of the sixteen tracks on Union Cafe, we can hear Simon Jeffes later compositions in the way they should have been, mixed properly, with the warmth and tone that Vinyl provides. The full scope of his ideas is allowed to drift off the reins, with his piano playing being in the fore. For example, on the brass-heavy opening 'Scherzo and Trio', violins are added to the mix., whilst 'Organum' has a similar pastoral feel to their most widely known piece; 'Music for a Found Harmonium'.

The more experimental side of the group’s sounds appears to take centre position in such pieces as, 'Passing Through', which is more than five minutes of running water. 'Yodel 3' features a lively guitar part, mixed with muted brass throughout.

The world of the Penguin Cafe Orchestra isn’t always the easiest one to enter, but when you are familiar with their sounds and styles, it offers something completely new and unexpected in the world of music as we know it. It is instrumental music at the end of the day, but there is no way in which it will ever be considered easy listening music, or muzak.

Take a listen, or pick up a copy of Union Cafe, here.

More in this category: « Iron Maiden - The Book Of Souls: Live Chapter The Grey Merchant - Avenue De Rennes »
Login to post comments
back to top