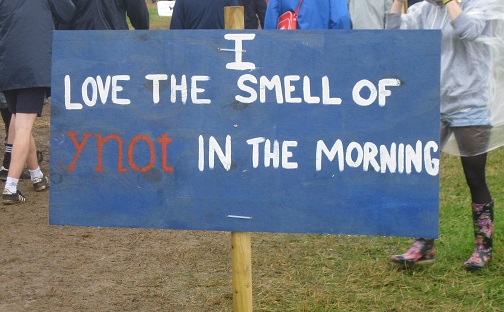 Glasgow's Prides play their “sort of single” on the Main Stage. Rain falls, sideways. A single balloon in the shape of a Minion from Despicable Me floats somewhat vigorously across a bleak sky. Welcome to Saturday morning at Y-Not. The mornings on the Main Stage are typically reserved for up and coming bands and today is no exception, as the aforementioned Prides, Bang Bang Bang and Neon Waltz all entertain those up early enough to make the journey through the rain to the arena.

It really is a little more than just rain though. Wind and hail also make brief(ish) appearances forcing everyone outside back to their tent or the nearest bar; the effects of which are evident later in the day. Unlike Kendal Calling however (another festival taking place this weekend), the weather subsides early enough for us to don our wellies and take a trip across the site to The Quarry Stage in a bid to catch folk-punk troubadour Beans on Toast, whose occasionally irreverent, often political acoustic numbers are likely to lift any dampened spirit.

Arriving a little way through his first song, it's clear a lot of people have had similar thoughts; the crowd spilling out backwards down the small hill in front of the tent. Although there's an undercurrent of seriousness to Beans' plight, he intersperses his political ideals with tracks about blow-jobs and getting drunk, even recounting an instance from Standon Calling, in which he impressively ended up being “bitch-slapped” by an Australian drum'n'bass duo for being too drunk. It's brilliant afternoon entertainment, and we can't wait to check him out on tour later this year.

Surprisingly enough it seems the weather is finally on our side, and despite a perpetual ring of grey that surrounds the site, the sky above is clear and we head on over to the Main Stage to catch Catfish and the Bottlemen. Having taken last year in their stride, the band have already garnered an impressive reputation, and their forthcoming debut The Balcony looks set to see them explode. Though this is one of over thirty festival appearances over the Summer, the sheer energy they exude is enough to make you believe it's their first and only this year. Despite an early warning that they “may have to finish early due to an electrical storm” the band manage a full set of tracks including each of their six singles, whilst last year's 'Homesick' even sees the band fall in to Rod Stewart's 'Do You Think I'm Sexy'. The crowd lap up every moment too, 'Kathleen' and current single 'Fallout' going down especially well.

Oddly, the crowd thins somewhat before and during Swim Deep's set, while unsurprisingly Shed Seven draw the biggest of the day so far; their '90s anthems appealing to those of the crowd old enough to remember them, yet going over the heads of those present only so as to reserve a decent spot for The Fratellis. Like Razorlight the previous night, The Fratellis seem to be here to sate an appetite for nostalgia. Like Razorlight again however, they put on a fantastic set that's only marred by a few members of crowd throwing bottles, spurring frontman Jon Fratelli to threaten to leave if it happens again, “No 'Chelsea Dagger'. None of it.”. It seems strange for a singer to admit that a crowd only really wants to hear one song. It does later prove true, however, as the closing notes of said track ring out, people appear to lose interest. It's a shame really, as despite them feeling like your traditional festival nostalgia trip, they put on one of the best performances of the weekend.

One of the biggest surprises of the weekend was Saturday's headliner Dizzee Rascal. Having seen Dizzee before, I really wasn't expecting much, but figured I'd take a gamble and see if this time round, we wouldn't be as disappointed. We weren't. Playing an impressive number of tracks from his first two albums, as well the expected hip-pop of his collaborative efforts, it really does seem that Dizzee is back on form. Knowing just how to get the crowd going, a moshpit opens up and doesn't relent once; lazers, confetti cannons and smoke machines are all par for the course, whilst an already-lairy crowd (that seems to stretch back to the arena gates) out-do themselves with each and every track he drops. 'Bonkers' sees an end to the set, but also sees the crowd reach the peak of its craziness, almost literally losing its collective shit.

With that we once again head back to our tent for a few quiet drinks, safe in the knowledge we're probably going to feel fresher than most in the morning, though secretly yearning to be able to party like we used to.

Arriving at a festival just as it's gone dark isn't the most sensible of ways to begin a weekend in a field, yet that's    the way we chose to begin Y-Not Festival, a small, yet perfectly sized event (though it has downsized from last  year's festival) that takes place atop one of Derbyshire's many hills. Only an hour or so's drive from Manchester,  we didn't bank on getting almost spectacularly lost somewhere on the other side of Buxton, with only sheep to ask  for directions. As such we arrive on site just after 9pm and opt, rather sensibly, to pass on going to see Thursday  night's entertainment Goldie Lookin' Chain and instead just listen whilst setting up our tent behind the main stage.  Hearing the band close with their 'classic' 'Guns Don't Kill People', we decide a fresh head tomorrow is probably  ideal and call it a night.

Morning comes, and so to, in true festival spirit, do the sounds of some middle class hippies filling balloons with laughing gas. Despite a somewhat overcast morning it's reasonably warm and after a couple of drinks we head in to the arena for some food and first band of the day Hey Sholay. Though there's barely a crowd at this time in the morning, the band have an energy and a sound that wouldn't go amiss with some of the bigger names around at the moment. Opening track 'Wishbone' gets a warm reception from some established fans, whilst seeing the modest crowd almost double by its end. For the opening act of the day, and for many, the weekend, Hey Sholay have a penchant for impactive, crowd-pleasing tracks that are inevitably destined for bigger crowds and bigger stages.

A meander across site takes us to Mussel Beach, a cocktail bar filled with deckchairs and bad puns. The cocktails are spot on though, if not a little limited, but they certainly seem to go down well with punters across the weekend.

Time for self-proclaimed gutter rapper Itch now who draws an impressive mid-afternoon crowd over at The Quarry Stage. Renowned for his energy as ex-front-man in The King Blues, on his own it surpasses that, seeing him relish in the room the stage provides. Until he ends up in the heaving mass of bodies stage front, that is, even managing to keep to the beat as he's mobbed. It's an impressive performance again for so early in the day, though a little more of his Manifesto EPs wouldn't have gone amiss. 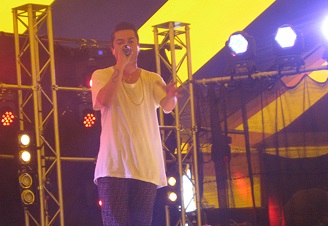 Back on the Main Stage, Manchester's Sonic Boom Six ply their abrasive blend of ska, hip-hop and anarcho ideology. It's heavy stuff, and not perhaps what some people were expecting given the looks on some faces. Having seen the Boom before however it's par for the course and they manage to get a decent number of people moving before their set ends.

'Banter of the Day' award would probably have to go to Spector however, who tell the crowd they “look a million dollars..Australian dollars” and that this is “the best festival in Derbyshire...well maybe second”. The highlight of the evening however comes as a surprise in the form of Razorlight, whose set is filled with their back catalogue of hits such as 'Golden Touch' and 'In the Morning'. Someone behind me in a lesser band shouts for singer Johnny Borrell to change his clothes, ironic since this guy didn't change his all weekend either. The crowd reaction to Razorlight is probably what's most surprising however, as if they're a band whose popularity never waned. Their set is impressive though, and you can't help but think the crowd might have preferred them as a headliner.

Closing out the Friday are White Lies whose huge sound is big enough to headline most festivals, and are certainly more suitable a headliner than Razorlight would have been, at least in terms of relevancy; it feels somewhat lessened however, by the crowd's earlier response and tracks such as 'Fairwell to the Fairground' and 'To Lose My Life' do go down as well as expected. White Lies sound is sonorous, it's emotive, it's impassioned, but it's not music to party to. And though there are plenty of people here enjoying themselves, you can't help but think that their sound is lost on some of the younger members of the crowd, of which, to Y-Not's credit, there are many, making it a surprisingly family-friendly festival should you wish to bring them.

With that, we call it a night once again, impressed by the quietness of where we're camped and grateful too, of the placing of the “Rock and Roll” camp-site, situated at the back of the site, away from the Family Camping and Glamping sections, and, judging by the look of many a hungover teenager's face the following morning, plenty more people could have done with a quieter night too.