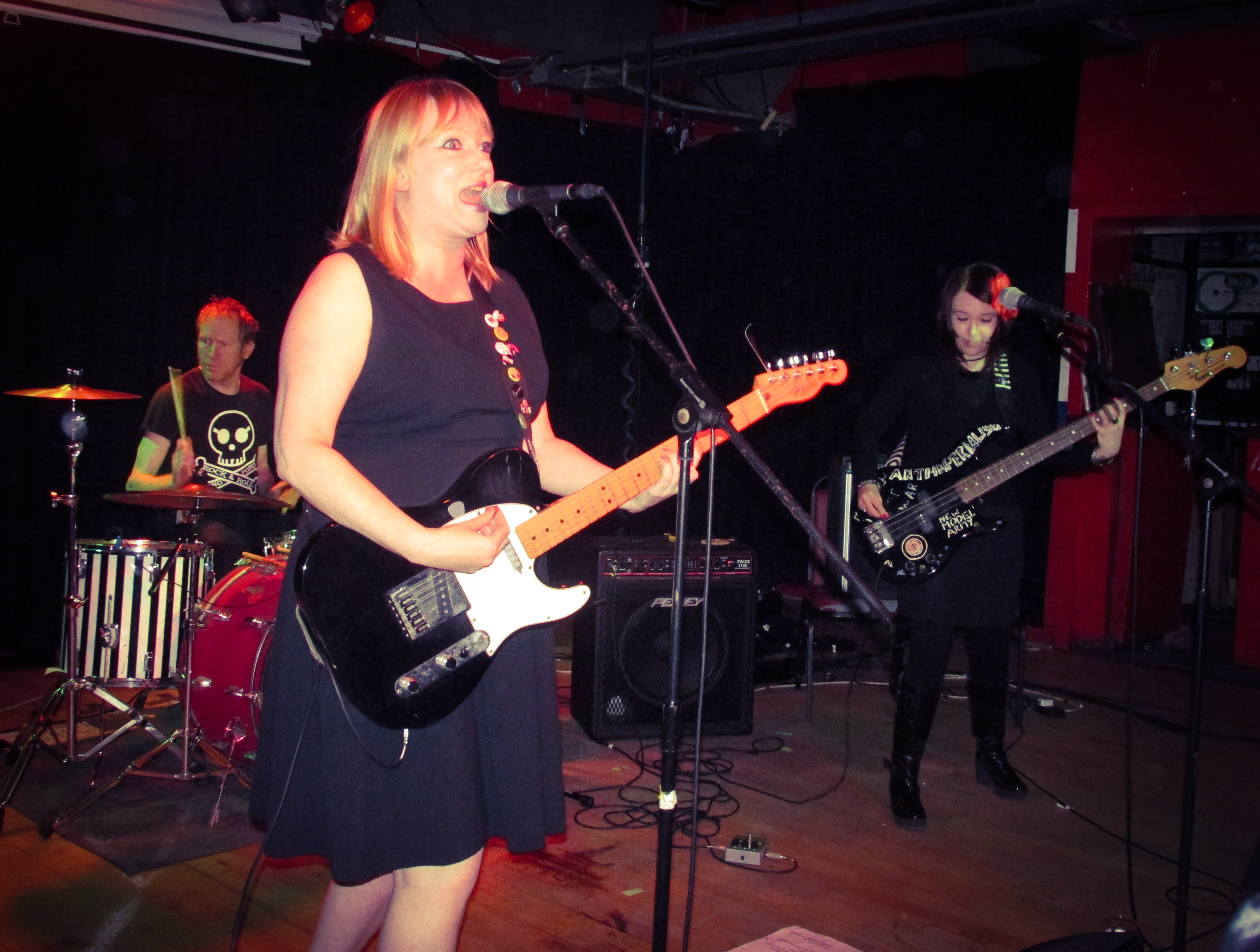 I arrive at the bustling Wee Red Bar, albeit 5 minutes late (and a bit flustered), due to traffic jams uptown, and not being able to get in through the front gate of the art college. However, I was rescued by a very kind passer-by and her friend, who it turns out, is one of the bass tutors at the school - thank you whoever you are!
Tonight is showcasing the graduate bands from the last term at Girls Rock School, Edinburgh. The bands are to perform three songs each. The atmosphere here is excitable and so supportive, and as the crowd are 95% female, there is a really different dynamic. The love in the room is palpable.

As I arrive the Astroturf Skirts, are already finishing their first song, however I catch their cover of Chvrches ‘Never-ending Circles’, and they close their set with a self-penned number; ‘We Are Punk Girls, We Are Riot Grrrls, We Are Beauty’. You certainly are. I'm sure I'm not alone in this, but I feel quite moved by their heartfelt performance.
Next up are The Unrepentants, and they are here to ROCK! Opening with a stomping cover of PJ Harvey’s ‘This Is Love’. Followed nicely by a Dead Kennedys number and closing with a rendition of Bikini Kill's Riot Grrl anthem ‘Rebel Girl’, that Kathleen Hanna herself would surely be proud of. 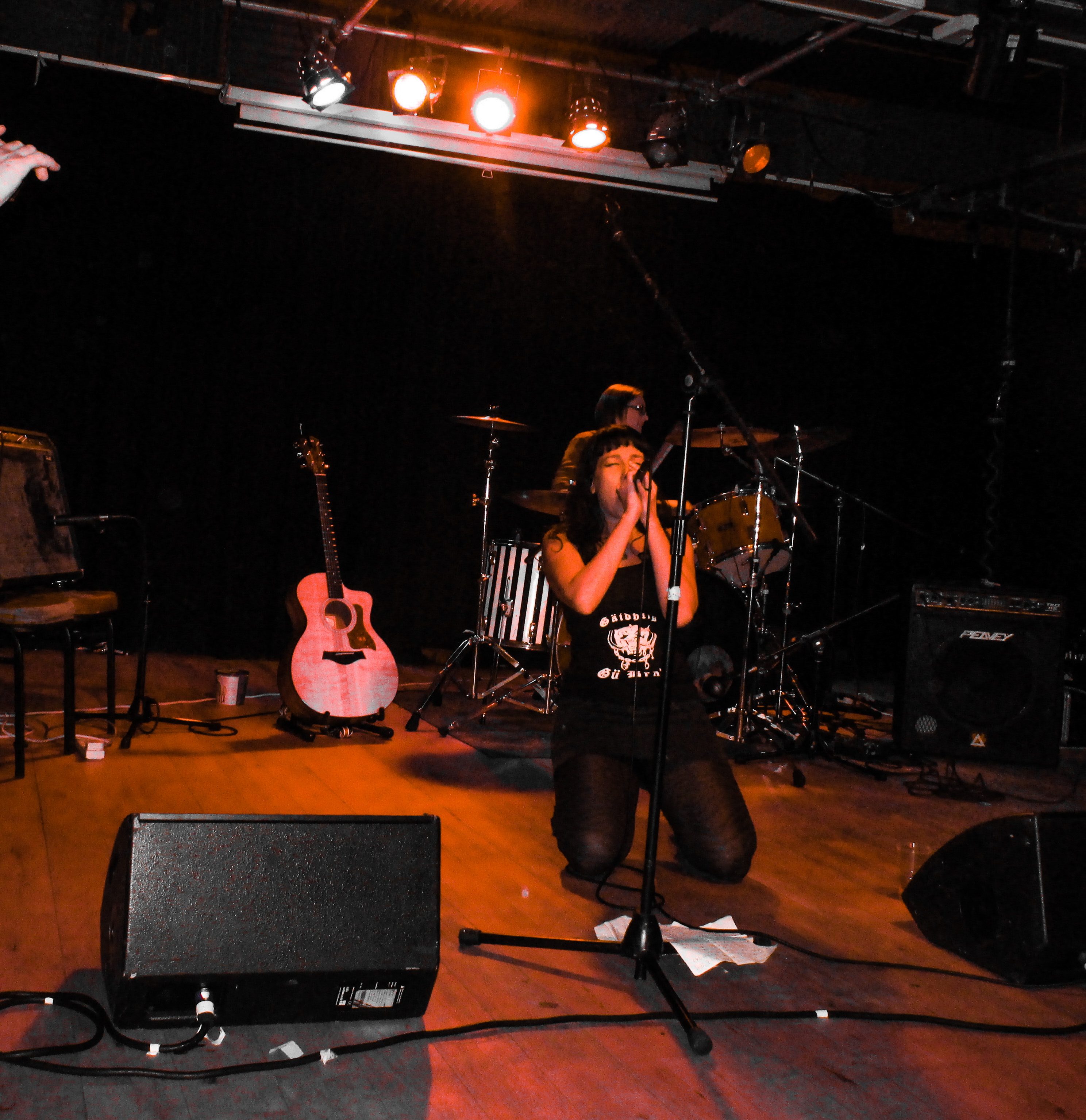 Lou McLean is the penultimate act of the showcasing musicians. She is a singer / songwriter playing an acoustic guitar. Her style is melodic, poppy, and quirky. She's joined by a fellow student for her final number, and like her predecessors, she puts on a sincere and very confident performance. 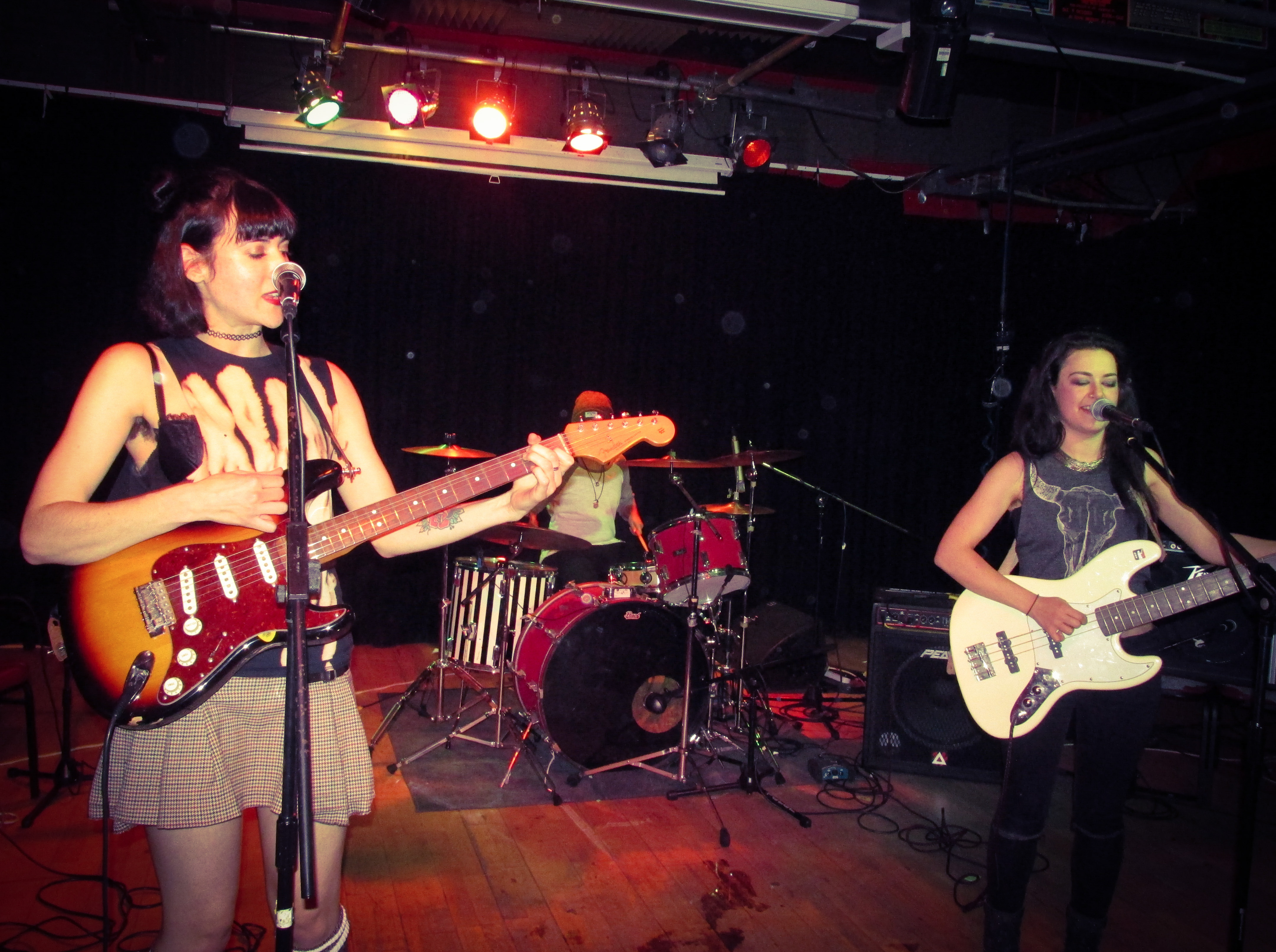 Last but not least are Taco Tuesday. Introduced by Fiona Watt as ‘raging against the patriarchy’; they open with their own self-titled theme tune. Followed by a cover of Grimes ‘Oblivion’, a song about sexual abuse - if no one talks about it, it's never going to change. Their final number 'Period Pants', is brilliant, fast and punky; and ends with the singer whipping off her skirt, not quite a la Bucks Fizz (for those who can remember that far back!), but much more exciting! Genius. I really hope to see this band doing their own shows soon.
After a short break it's time for Joey Clarkson; a country / rock / pop artist from Canada, who is taking time out from her tour to play here tonight. She duly bigs up the GRS graduate bands. Her set includes a cover of Sixpence None The Richer’s saccharine sweet ‘Kiss Me’.
Closing this prestigious evening, The Fnords take to the stage. Fnords singer Sarah Glass, is also co-incidentally co-founder of the Glasgow GRS. I saw them play a few months ago (review here), and tonight they seem much more powerful and receptive to the crowd. They belt out their numbers at a fast no-nonsense pace, and throw in a few choice covers. They also debut new song ‘Great Sticks?’ and finish with ‘Scumbaby’. Returning for an encore with Gloria Jones' ‘Tainted Love’, The Drags ‘I Like To Die’ and everyone's favourite; The Cramps ‘I’m Cramped’.
Co-founder Fiona Watt wraps up a fantastic evening congratulating the graduate bands, Luke on the sound, and special guests Clarkson and The Fnords. I feel honoured to have been part of such a special occasion.
I spoke with founders Fiona, Caro and Ashley from the Astroturf Skirts last week, that article can be found here.
Read more...

It appears to be a quiet night at Bannerman's as The Fnords take to the stage, not that they let this deter them. As a stripped back Edinburgh three piece garage punk band with a definite surf edge, their sound is reminiscent of trashy garage bands on labels like Pin-Up / Rip-Off Records back in the early '90s (jeez, was it THAT long ago!). However, not wanting to place them into a nice neat box, they exceed this sound by bringing their own charm to the party.

They launch with much attitude into ‘Non-Verbal Adjective Agreement’, from the 2011 LP Children Shouldn't Play With Dead Fnords, followed by more twangy numbers such as instro ‘Taxidancer’,  ‘Do the Trotsky’ and ‘Scumbaby’.

There are also a few excellent covers in the mix, notably instro-screamer ‘Daddy Love’ (by The Trashwomen), and ‘I Like To Die’ (by The Drags). On a few occasions vocalist Sarah looks over at bassist Caz; "We’ll try and get through this next one..." she laughs nervously, but they always do get through it, and pull it off with ease. They are definitely the most enjoyable female fronted garage band I’ve seen for a long time, and I look forward to seeing them again, hopefully soon.

Tonight’s top billing are Pete Bentham & The Dinner Ladies, ‘Kitchencore from Liverpool’. Bentham turns out to be fascinating character. He is the maverick behind the most excellent Free Rock & Roll DIY collective in Liverpool. Go check out their Facebook page for more info.

The crowd seem to have disappeared briefly following Carbona Not Glue (one of the longest running Ramones tribute acts in the world), possibly to get more beer after much pogo-ing, but they are soon back for some Dinner Ladies action.

Bentham certainly doesn’t lack imagination and creativity with songs like the garage-y ‘Marcel Duchamp’ and the childlike magic of ‘Hey Yuri’. Catchy ‘Do The Don’t’ and the swaying staccato-ness of ‘You Gotta Work’. Bentham talks about his hometown in-between songs with equal helpings of humor and poignancy.  ‘Dead's Not Punk’ is a fast drive through the mishaps of drug use; "dead, dead, dead, dead, dead, dead, DEEEEEEAD!!!". They have no problem getting the crowd to participate in some post-Ramones pogoing.
It’s tricky to define the sound of Pete Bentham & The Dinner Ladies, as they are smart and quite unique. For all intents and purposes they are Poppy Punk Rock & Roll at it’s finest, and those Dinner Ladies certainly know how to use their utensils. Make no mistake, they are punk in the truest DIY sense of the word. Kitchen-tastic!