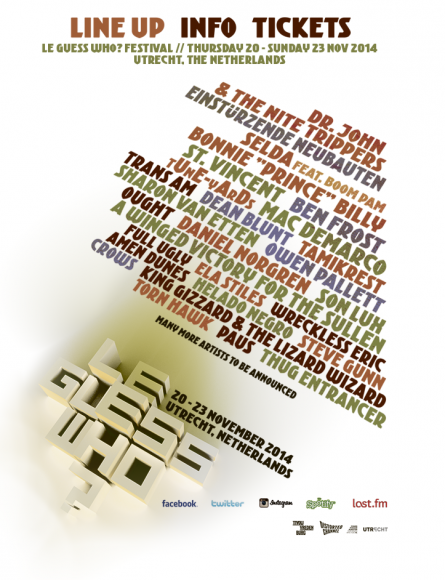 This year's Le Guess Who? (Utrecht, 20 - 23 November) is shaping up to be even more epic than usual.

Atop such previously announced acts as Dr. John & The Night Trippers, St. Vincent, Einsturzende De Neubaten and Bonnie "Prince" Billy the initial acts participating in the 24-Hour Dronefest event and the line-up for the Michael Gira curated Mouth To Mouth sequence of performances have today been revealed.

Beginning at midnight on Saturday, November 22, the 24-Hour Dronefest will cover the entire spectrum of drone during 24 non-stop hours of live performances and installations in collaboration with New York's Basillica Hudson whilst it will be the second installment of Mouth To Mouth and the first spanning multiple days and venues.

For ticketing and all other details visit the Le Guess Who? website here. 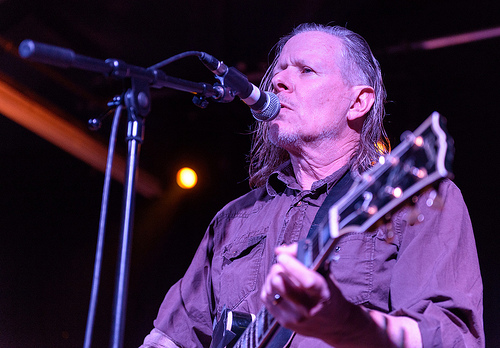 There is an air of excitement filling this cavernous warehouse on the outskirts of Newcastle this evening as it presents us with a rare yet intriguing prospect - the thought of one of the world’s loudest bands in such an underused space fills us with glee. Swans are currently taking their new album To Be Kind on a world tour; fortunately for us we have front row seats as these behemoths hit Newcastle.

We arrive as Jenny Hval takes to the stage, hunched over a plethora of electronic goodies yelping and wailing. Her performance is somewhere between electronic brilliance and eclectic weirdness at its best. However, this all seems supplementary, as we watch the dancing lights and the visuals being projected on to the exposed beams above us.

Jenny’s set passes over us though, the excitement too much, as we prepare for a sonic assault of epic proportions. Swans take to the stage very early, just after 8:30. They open with ‘Frankie M’, and the sound is unbelievable as we stand at the front, the sheer force of these monolithic beasts physically moves us as we cannot help but escape from the front for fear of our ears.

Michael Gira and his band serenade us with tracks from To Be Kind, the awesome ‘Just A Little Boy’ sounds absolutely unbelievable. Built on a solitary horn into something humongous, it’s like a wall of sound that no matter where you are it hits you full in the face. With signs up all over the venue directing the audience to the bar for earplugs, these make absolutely no difference as the incredible low frequencies still tear into you.

‘The Apostate’ from album The Seer, provokes a similar reaction, this time built on a solitary slide guitar to begin with. It builds as members of the band add their individual parts, until this cacophonous sound reaches its full force, shaking the building with its machine gun-like power. By this point we’re pinned to back of the venue soaking up the sonic delights on offer.

They leave us filled with awe and amazement as to what has just happened, it's safe to say Swans truly took our breath away this evening, in more ways than one. An amazing experience; the heat, the sound and the excitement, nothing can beat this feeling and it's an experience we’re unlikely to see repeated until Swans' inevitable return.