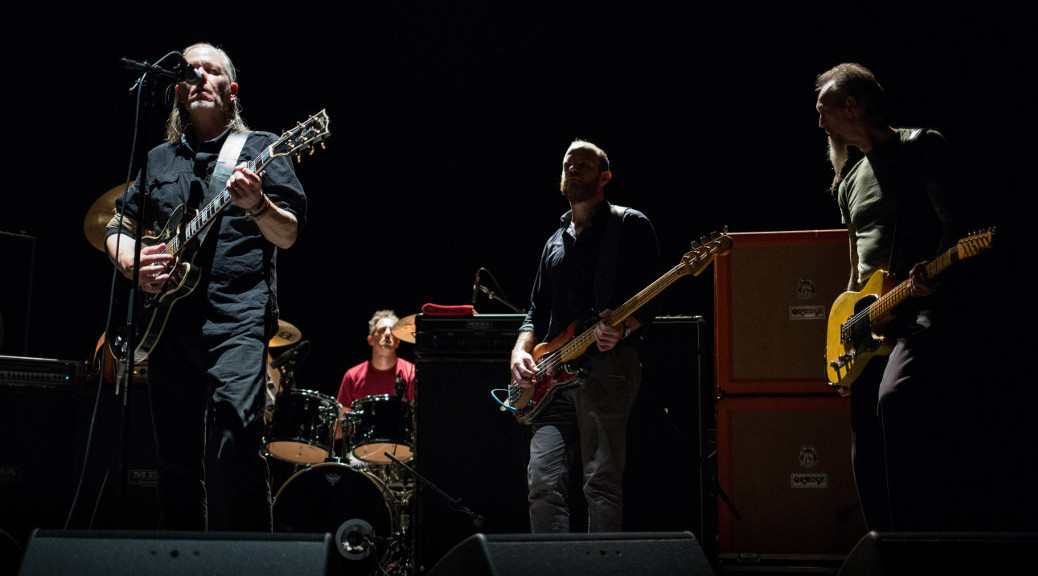 It is with mixed emotion that I approach the doors of London’s Islington Assembly Hall to watch Swans. Although they are an incredible band, watching Swans play can only be described as ‘gruelling’. Looking round the audience an hour or so into the evening, although the age range is varied (the band have after all been going in one incarnation or other for several decades), every face is contorted into the same maenadic, wide-eyed expression of pleasure/pain. Is this fun? The answer is yes. Yes it is.

Swans Svengali, Michael Gira walks onstage at the beginning of the night, taut and tight lipped, his eyes darting around like a snake. He picks up his guitar and begins unceremoniously with a new composition, a live-only sledgehammer titled ‘The Knot’. This is an almost wordless track which lasts NEARLY AN HOUR, and although a cousin to the kind of swamp dirge he has been treating his audience to since 1982, 'The Knot' represents a latter day Swans aesthetic - less repetitive drone, and more rhythmical ebb and flow, increasing to a crescendo over the course of a song.

After 10 minutes of organ sound and gentle guitar picking, Gira turns away from his audience, back towards the drums. As the guitar picking gradually takes on a repetitive, hypnotic tone, he switches from individual notes to heavy chords. What follows is wave after wave of crescendo, as drummer Phil Puleo’s drum beat follows Gira’s movement as he swings his guitar from side to side. After about half an hour of bludgeoning his audience with this, he turns away from the drums, walks up to the mic and begins to chant. What follows is ‘Cloud Of Forgetting’, the opening song from their latest album, The Glowing Man - a beautiful track, more like a sermon than a song.

Swans started life in the Eighties as a no-wave art rock band, and over the years, Gira has upended his audiences with a wry smile as he makes his way through tracks titled things like ‘Raping A Slave’, ’Public Castration Is A Good Idea’ and ‘You People Make Me Fucking Sick’. Swans members have come and gone but Gira and the sound has maintained that thread of irony mixed with menace, the sense that Swans are writing the end of something, but with a smile and a wink. From the beginning of tonight’s gig at the Assembly Hall, the repetition of the drums and the turn of phrase of Gira’s guitar coming out of a stack of amps about six feet tall - it all feels like the build up to some kind of apocalypse.

But although the eschatological bent of Swans guitars and drums give off the impression they’re constantly coming to an end, Swans having lasted four decades points to the fact that they are an incredibly hard-working group. As is often the case with this kind of music, no matter how ’primal’ or ‘animal’ Michael Gira describes his output, it is very carefully crafted - he knows exactly what he’s doing. Rumour has it that Swans practice for ten hours per day for several weeks in the lead up to a gig. You can tell that the band are in sync as they move together in time, anticipating each other. They play for nearly two hours despite only playing six songs in total. The fans stand bobbing and nodding, the high-pitched whine of tinnitus beginning to echo in their ears, completely enthralled by ‘The Master’ - menacing and religious, ravaged and throaty voiced. As the band begin their final song, the punishing and beautiful title track from The Glowing Man, Michael Gira closes his eyes and waves his arms in the air in time to the drums, like wings flapping.

Across 14 Brighton venues, over 04 - 07 December 2014 Wire and One Inch Badge will present the latest in the Drill : Festival series.

Additionally there will be Krautrock Karaoke, Wire & Swans will collaborate to perform the event's iteration of the ever-changing 'Drill' and there will be an appearance of The Pinkflag Guitar Orchestra.

Earlybird tickets are currently £60 for the entire event (not a bad outlay for what is expected to eventually be a line-up of 100+ acts) and can be purchased from the festival website.