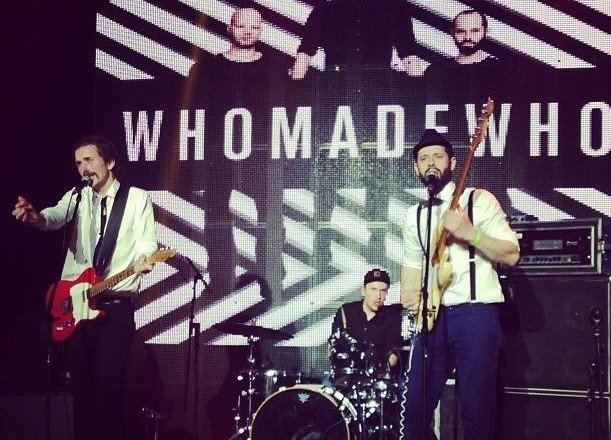 Thankfully, this was yet another year in which I saw loads of amazing bands play and where I had loads of great experiences at gigs, festivals, and club nights. This was my first year at the Primavera Sound festival in Barcelona (which was awesome! Even if it did drown one pair of my shoes), and this was the year two excellent new pop venues opened close to where I live. The new Doornroosje at a stone throw’s distance looks wonderful, and the new Tivoli Vredenburg with all its different rooms on different floors is just perfection. I saw new and upcoming bands like Years & Years and Thomas Azier (2x), people at the top of their game like St. Vincent (3x) and Spoon (2x), and old dogs like Morrissey (almost 2x, you know how that goes...) and Giorgio Moroder. Oh what a year, and the following five gigs were the ones that stuck out of that whole pack of great experiences for me for one reason or another. (vids not from the gigs listed below)

These boys, when they’ve got it on, they’ve got it on. In the small venue Ekko in Utrecht these guys were really doing their thing, with those soulful vocals and those melancholic-yet-dancey sounds they create. Add to that the fact that these guys, whilst playing an instrument, still manage to add some theatrics in there as well, and you’ve got a live show with great music plus some good entertainment to boot. Not to mention that it does seem like they are having fun, which in turn spreads to the audience like a virus. Thus live they both sing and play their instruments expertedly, they add theatrics, and they put the joy in the experience as well. Plus just that little dash of mayhem when they end it in the audience with ‘Satisfaction’. What more do you need, really?

I vividly remember this young fellow sitting right in front of the mic stand by his lonesome self a good half hour before the show. After the gig, I knew why. Blood Orange, the funk outfit led by the prolific Dev Hynes, really turns up the groove live. The sound at the start of the gig was a tad dodgy, but that ship was righted after about a song and a half or so, and then it’s all fabulosity from there on. You’ve got the funky guitar of Hynes, the female vocals, the horns, the tight rhythm section: it all just works. Add some good, groovy tunes in there, a Solange cover, and Hynes busting a move like he’s Mr. Jackson himself, and you’ve just got this deliciously fun & funky show on the “small” Pitchfork stage at the Spanish Primavera Sound festival.

I would remember this show only for the girls trying to squeeze their way through the audience a minute before the start. Getting loads of dirty looks as they push their way up front, one of them agitatedly remarks “why the heck are they looking so angrily at us. It’s not like they reserved these places or something”. Ehrm, yes we did, the moment we arrived at the place an hour before kick-off time to make sure we’re close to where the action is. Oh well. I already loved the album by the duo of Dave Harrington and Nicolas Jaar, and what they do live so well is that they just add a bit more oomph to the beats to get a bit of a dance vibe going. Add that to the fact that they are craftsmen in their respective fields, and that they nail the vibe perfectly, and then this show maybe epitomizes the year 2014, if only because apparently the lads have (at least temporarily) retired the Darkside moniker.

Next to the fact that I just love the album and the songs, live they do add exactly those things that you want a band to add. Extra emotion, extra theatrics, extra effort, and this whilst still performing the songs as tight as on album. Frontman Samuel Herring really takes over. He looks like a real proper bloke, and sometimes he almost grunts as if in a metal band and nearly charges into the audience aggressively. Moments later though, he is shaking his booty or is doing that leg thing those girls in Western saloons always do (though slightly distorted, slightly more manic). And then he suddenly tries to touch the sky with his finger as he is almost teary-eyed. The guy really knows how to perform. Luckily the lads back him up in as solid a way as possible, so if you just love the songs, you’re not getting short-changed on that either. A must see live band, if only because next to all of this, they also do seem genuinely grateful and humble that they can perform for whatever audience is in front of them.

Two major blokes just fainted during this show! True story, though I’m not sure if that’s because of how much they love Slowdive or whether something else was in play (probably the latter, though it was in the open air, so it wasn’t a shortage of oxygen or whatever). Slowdive have reunited for a string of gigs (and, next year, an album apparently), and they didn’t make a mockery of their former selves, performing as tight as a band with so many guitars can possible perform. Dreamy shoegaze performed to perfection, the band just weave this intricate web of guitars and other sounds, with on top of that these dreamy male and female vocals. From the word go they managed to completely mesmerize me, and as someone who missed them during their first go around I’m happy they’re not only back, but that they have matured rather than aged (not that they were teenagers when they stopped or anything, but you get my drift).

This list is Stef Siepel’s, writer of, amongst others, the Weekly Froth column that goes live every Friday. It does in no way reflect the collective Musos Guide opinion.