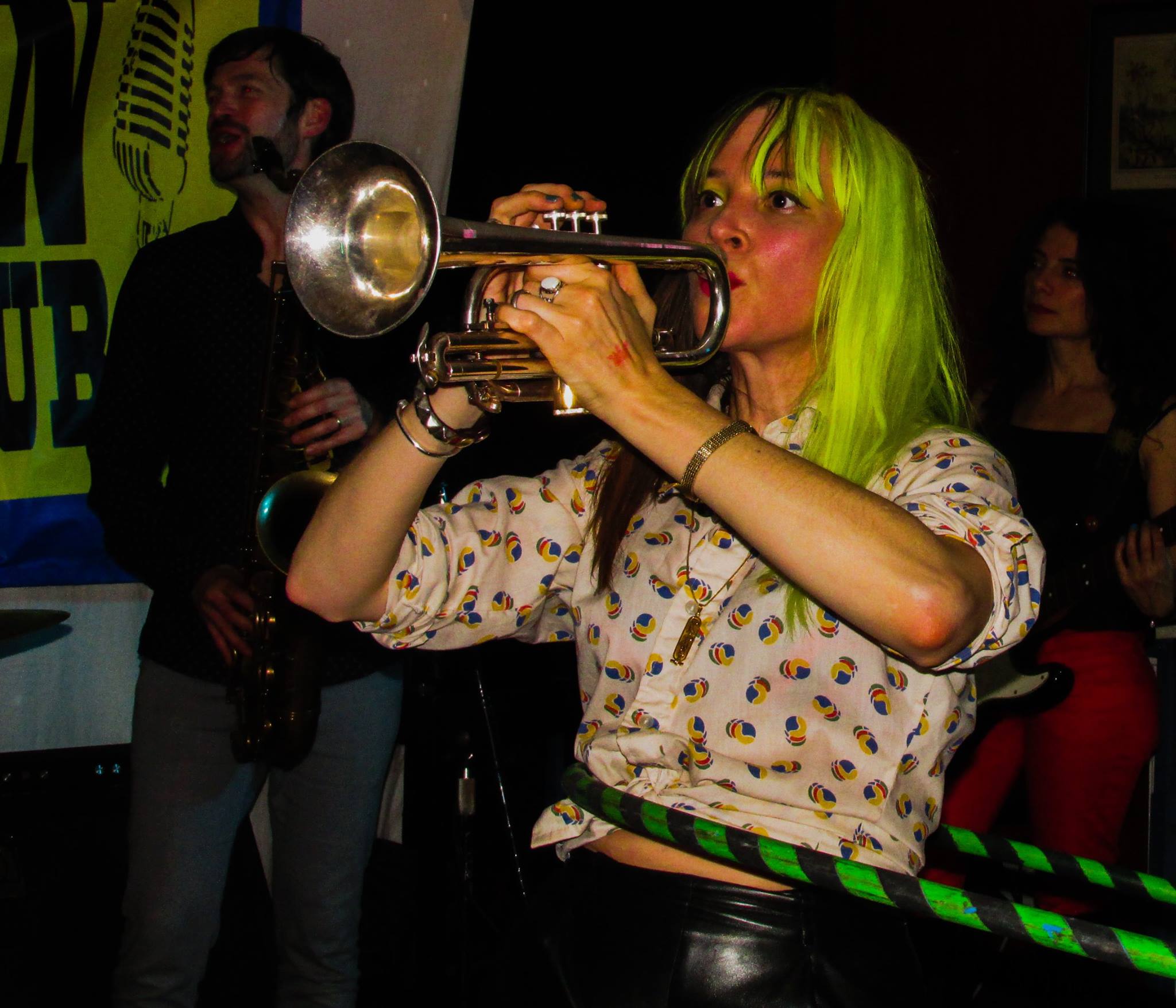 Despite storm Abigail drenching the city plenty of hardy souls made the effort to get along to Leith's Franklin Cricket Club tonight, in order to witness the live powerhouse that is Oh! Gunquit on stage.

Although slightly underlit their's was as electrifying and raucous a performance as expected. The likes of 'Bad Bad Milk', 'Sinkhole' and of course 'Lights Out' being raced through at a frenetic pace gave all present barely a chance to catch their collective breath.

In Tina Swasey the group have a singularly engaging vocalist, happy to get in amongst the crowd, break out some Northern Soul dance moves and with the control enough to successfully hula hoop whilst playing the trumpet. Diaphram of steel!

Rawer than on debut album Eat Yuppies And Dance their party sound gave the crowd exactly what they wanted with its solid, rumbling rythym section, the provocative sax playing and Simon Wild's guitar lines tying it all together behind Tina's commanding frontage. Two encores followed the main set, including a race through 'Wooly Bully' that properly set the seal on another top notch headline act at the Franklin Rock 'N' Roll Club.

Not that tonight's support act was in any way inferior. Looking far fresher than you'd expect after two months of touring Sao Paolo's The Black Needles delivered up a stomping, raw set of stripped down garage. Slower, "romantic" numbers were annonced once or twice but never quite seemed to take on the form that description implies as the Brazilian trio rattled through a dozen or so songs including a well chosen cover of the Q65's 'I Got Nightmares'.

Singer Jonas Morbach regularly finished off songs by lending a hand on the drums, whacking away at a cymbal with his guitar head, an act emblematic of the exuberance of the band's overall performance and indicative of how caught up in the live situation they manage to get. Absorbing stuff from a thoroughly personable group.

Another successful show at the Franklin (and what other bar sports its own cricket jumper?) with The Bonnevilles being the next headliners there on November 28.

Cheers to Tina, Simon & Jonas for taking the time to have a blether on the night and to the Franklin Rock 'N' Roll Club team for yet again coming up with the goods. 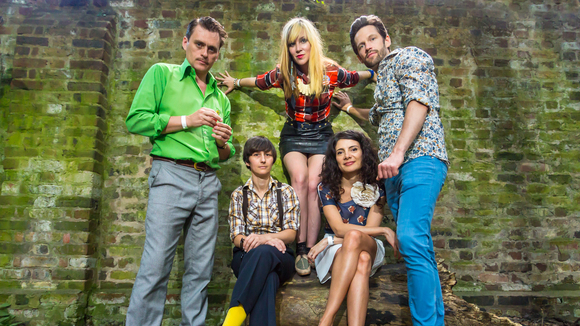 I caught up with Tina and Simon from Oh! Gunquit before they embark on their mini-tour of Scotland this weekend...

DS: You’ve been playing together for around 5 years now, with a couple of singles and your first album Eat Yuppies And Dance released in March this year. How did you feel about the wide positive reaction you’ve received to the album, and the radio play?

Well we're very happy that people are getting vibes from it. We feel sometimes we're in this funny place where we're too 'retro' for some and not 'retro' enough for others, which I guess we don't really mind at all...ha-ha. And it's always great to hear your music on the radio!!

DS: I’ve read about how you guys formed the band (being neighbours and visiting the same vinyl-only club in London), but can you tell me what your biggest musical influences are; and what was it that you had in common that really made you click and decide to go for it?

Simon: We started listening to lots more early '60s gritty r'n'b, girl groups, garage-punk, early surf instrumental bands, exotica & rockabilly records. I think the one idea was to really delve deeper into the older music but not try and sound like any one genre and lyrically make it relevant to today and also our sense of fun & imagination.

Tina: I used to work at this pub called The Constitution up in Camden and quickly came across a few people who were into good music including the Nitty Gritty crew (who still run a monthly night there) and a London-BlackCab Driver named Bob who I rented a room from. He was an avid Soul, Ska, R'n'B, collector and would also buy a lot of the ACE records reissue compilations. I remember that he had that album we instantly loved called Intoxica with lots of great 'strange & sleazy instrumental sounds', I think this was one of the reasons for deciding to get a saxophone in the band.

Simon: We wouldn't say we had any one specific single musical influence when we started; it was more of a mix of stuff that we were getting more and more into at the time and wanted to do a bastardised version of. As soon as we wrote our first song just for some drunken fun it clicked very naturally, there was no pressure to 'be a group' it was purely just for the buzz of playing without any plan. It also worked well in a way I think that Tina hadn't been in a band before, so she didn't have preconceived ideas about writing songs, singing, and performing, just pure gut instinct and good taste!

DS: Were either of you in bands previously?

Tina: I used to help run a warehouse venue in Denver US with some friends and put on touring punk bands, but my only other experience is playing trumpet in a marching band!

Simon: I had played previously in a sort of post-punk group who were into The Fall, Talking Heads, Liquid Liquid, Devo, etc. and also with Tina previously being a Crass-loving 'Crusty Punk-Rocker' we brought a little of these things into it too I guess...

DS: ..and have you met any of your musical heroes?

DS: Cool. What do you like the most about performing live, and what inspires you to keep playing?

The buzz of playing live is always addictive and I think that's where we really thrive best. It's a bit like Sex, eating your favourite food, and getting high all at the same time. To get a room to freak-out, howl, and get lost in some noise with us is fantastic fun. Life can be difficult, stressful, and full of pain and bullshit so you need to get your (high?) kicks when you can and when we all jump on a little weird juiced-up-octane trip together for a while it makes all the other crap you have to put up with bearable.

DS: The band are currently signed to infamous garage-punk rock n roll label Dirty Water Records, and have been embraced by that scene in general; playing the likes of Weirdsville, Hipsville, and the upcoming gig at the Franklin Rock ‘n’ Roll Club in Edinburgh. How does that feel; were any of you part of that scene previously?

It feels like a big kinda community or a large dysfunctional B-movie family which is great! It really becomes apparent when you play more of these events and nights etc. Other bands/promoters in that scene really help each other out and we have made some good friends from hanging out with all the assorted reprobates. We both went to the Dirty Water Club before the band started although not regulars and would cross over at certain specific gigs and nights. We briefly did a club at The Lock Tavern booking bands from that scene and we just got more & more immersed in the joy of it.

DS: What is next for the band?

We've just recorded 4 new tracks with Jim Diamond which was a treat to do and we hope to put out soon. We're putting out a small release in the US, a new EP, & working on the next album. We're also looking to do a new video this month and playing more shows outside London with Spain and France in the calendar for next year so far....and always up for more, because as they say 'you're a long time dead!'...

Thank you so much to Tina and Simon for taking some time out to chat with us. There is a lot to look forward to!

You can catch Oh! Gunquit at The Franklin Rock n Roll Club in Edinburgh at 8pm on Friday 13th (wooooooo!!) November, only £6.00 on the door - you'd be mad to miss it, but if you do, they are playing for free! at McChuill's in Glasgow, 8pm on Saturday 14th November. Support for both shows is provided by The Black Needles, psychotic rock n roll from Sao Paulo, our recent interview with whom can be found here.