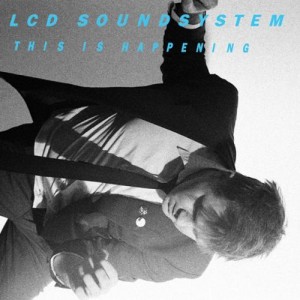 If James Murphy were to write a job description for his own job, it would make peculiar reading. "Frontman and knob twiddler wanted", it might read, "No singing voice to speak of; propensity to look a bit on the porky side; understated lyrical genius".

The idea of someone else filling Murphy’s role as the driving force behind LCD Soundsystem might seem a strange one – the frontman’s mark is what makes their output so peculiarly unique – but This Is Happening suggests that shipping in a substitute might not be such a big deal. The material may still be compelling, but there’s little demonstration of any progression since 2007’s Sound Of Silver. If Murphy wanted to sell an LCD Soundsystem franchise, it seems he’s finessed his formula sufficiently to allow him to scribble it down in a handover note and bugger off.

All of the hallmarks are there again from the word go – ‘Dance Yrself Clean’ kicks off with pots and pans percussion and a simple, two note bass line. Over the top, Murphy lays his now familiar half sung, half spoken chant, the occasional wounded lyric delivered with beguiling calm: ‘Talking like a jerk / Except you are an actual jerk / And living proof that sometimes friends are mean’.

It’s not until three minutes in that a thundering bass kicks in and Murphy drops the serene veneer, building up a head of steam that culminates in a repeated, pained screech of “It’s a show”. The song makes for a dramatic entrance, showcasing both the best and the worst of LCD Soundsystem. The words are masterfully, cleverly crafted – “Arguments are made from make outs,” sings Murphy at one point – but that cleverness can wear a little at times. The music is wonderfully subtle in its complexity, the track evolving without any nod to conventional verse/chorus structure. At the same time though, the song is probably three or four minutes longer than it needs to be, and while Murphy’s clearly got a point to make with the vocal, it’s difficult to follow the thread over nine minutes.

These familiar themes run throughout This Is Happening – ‘Drunk Girls’ is a muddle of lyrical feedback loops that drips irony; ‘One Touch’ builds around and old fashioned electro fizz; and the shouted “Pow Pow”s of the unsurprisingly titled ‘Pow Pow’ are run out over a bongo beat and threaded in between what sounds like a continuation of Murphy’s disgruntled everyone-hates-Americans ‘North American Scum’ rant. “We have a black president and you do not,” he says, “So shut up / Because you don't know shit about where I'm from that you didn't get from your TV".

The anger that permeates This Is Happening is perhaps what ultimately makes it stand up on its own legs – Murphy may be peddling old tricks, but he’s doing it in a way that forces you to sit up and listen. And since it sounds as though this is going to be LCD Soundsystem’s last album, it doesn’t look as though we’re going to be given the chance to tire of the formula - unless he can find a chubby, lyrically-minded replacement to sell it on to that is.