The Brutes will be kicking off the Franklin Fest on Friday evening with their very own brand of pebbles-y garage punk. I had chat a brief chat with Beauregarde Nanker-Phelge (yes, really) and asked for the low down...

Debbie: Who are The Brutes?

The Brutes are Highpockets Von Widdling on guitar & (mostly) backing vocals;  myself on bass & (mostly) lead vocals; and Heinrich Mitt-Schticks on thumping. We're just out of hibernation - our opening slot on the Friday of Franklin fest will be our first gig of the year - we've been a bit busy of late with our other projects such as lucrative covert arms trading (Heinrich), hugging puppies & kittens (Highpockets), and shouting at random strangers (me) amongst other "things".
Debbie: ...mmmmm... and where can we catch you after the festival?
Next gig after Franklinfest for us shall be at a garage punk all-dayer at Broadcast, Glasgow on Sunday 11th July (no line-up details at the moment); and we should be playing Glasgow's Merchant City Music Festival again (seeing as they've used a few seconds footage of us in their new promo video!).
Debbie: What would you say to those who haven't been to the phenomena that is The Franklin before?
You should come see us at The Franklin Fest because we're the first band on the Friday and you'll get more drinking time in if you're there for our set ...and the booze is real cheap there!!!
Debbie: What are you looking forward to the most Beauregarde?

I am most looking forward to getting the opportunity of screaming at random strangers, as well as the cheap booze and its effect on the patrons!

Catch The Brutes along with Les Grys Grys, The Courettes and The Gastronauts on Friday 24th June, that's this Friday, as in tomorrow! Get you skates on. Tickets for the weekend can be purchased here: Tickets Scotland Tickets are £20.00 for Friday or Saturday evenings + £5.00 for Saturday Pm at Leith Depot or £35.00 for the whole weekend (Friday & Saturday evening + Saturday afternoon)! Cheap as chips!

Read more...
In the run up to this weekend's The Franklin Fest, I caught up with DJ Claire Hyslop. She likes to spin those black shiny discs, and she'll be doing just that over the course of the weekend...
Debbie: How old were you when you first got into music / started to collect records?
I've been a music lover and a hopeless vinyl junkie since my early teens when I harboured dreams of writing for the NME and handed over the wages from my Saturday job to Barnstorm Records (a brick and mortar record shop still trading to this day). I gave up the top 40 for John Peel's radio show, flirted briefly with C90 mix tapes and even CDs but returned to shiny black discs 'cos they're best.
Debbie: When did you make the leap into DJing?
I've been playing records out since 2012. I play Garage, early soul, 50s and 60s R&B, some Northern and a whole load of Popcorn and titty shakers (all at the wrong speed).
Rhythm & Blues is my big passion at the moment and that's what I'm collecting most, but I'm lucky to be invited to play all sorts of dos - soul nights, R&B clubs and Mod weekenders. Supporting live bands is a kick:  I've 'warmed up' for The Thanes, The Collectors, The New Picadillys and soul legend Tommy Hunt.
Inspired by clubs like Basics (Edinburgh), The Hideaway (Manchester), For Dancers Only (Dublin) and Friday Street (Glasgow), I recently started an R&B club night in Glasgow with my pal Tom Gillespie called "Burnt Toast Black Coffee R&B".
Debbie: ...and have you ever played a duff set?
I'm not really the best person to judge that - I can usually get the dance floor moving! Certainly the most nerve wracking gig was playing records before a Tommy Hunt live show. Tommy was late to come on stage. I wasnt exactly running out of records but I was wondering where he'd got to. Unbeknownst to me, he was having a footwear malfunction so I felt bad afterwards that I had played "Shoes", "Barefootin" and "Can't Wait Any Longer" to fill the gap!
Debbie: Do you plan your sets in advance?
Never. You always have to judge on the night who's there, what they're enjoying and what other DJs have already played. I do customise the record box the night before though to match the kind of night it is.
Debbie: What is the most you've ever paid for a record?
I couldn't possibly comment. I have paid three figures for records I've wanted badly though. I've paid a lot less than that for others that have gone on to be worth a lot more so I tell myself it all comes good in the end. Some people have a pension pot and exotic holidays; I have a record collection! 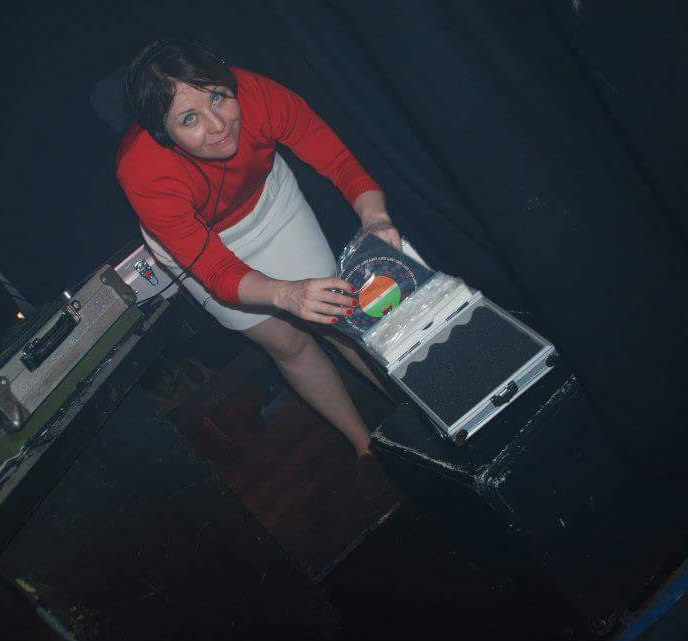 Debbie: How did you get involved with the Franklin R'N'R Club?
I played records at Friday Night at the Parlour in Leith from 2012 until it closed earlier this year. In fact Tony Two Eyes was the first person brave enough to give me a gig at his night Land of a Thousand Dances (thanks Tony!) and I always had a great time at The Parlour playing records with Tony, Laurent, Derek and Colin.
I love the Franklin: Les Grys-Grys took the roof off at their gig there last year.
Debbie: I concur, on both counts. If you could take 3 records only to a desert island with you, what would they be?
Trini Lopez - The Search Goes On
Little Jimmy Ray - You Need To Fall In Love
Milt Grayson - Wayfarin' Stranger
Debbie: And lastly… just for fun - how many mods does it take to change a light bulb?
Just one, but if he looks cool enough, everyone else'll be trying it.
Debbie: Good answer!
To catch Claire doing her thing over the weekend, Tickets for the Franklin Fest can be found here tickets-scotland.com
Read more...
Subscribe to this RSS feed