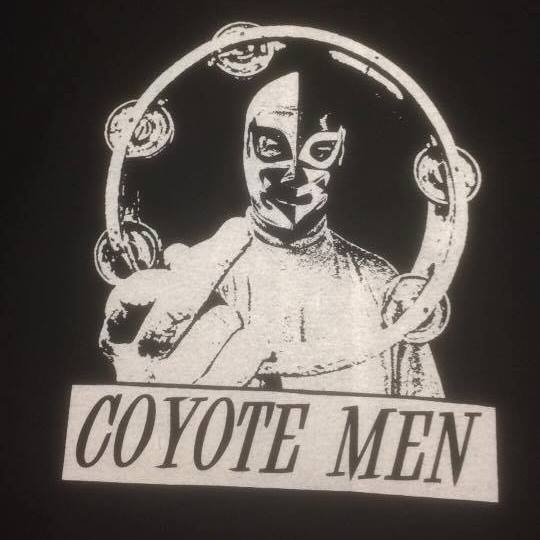 Up next... I had the great privilege of chatting to international heartthrob and Sultan of the Squared Circle, Sir Randy "Captain Dynamite" Hornocker of Los Coyote Men.

RH: Ah Ms. Sheringham, I've been expecting you. Sit yourself down kick off your shoes. You're in the company of Randy "Captain Dynamite" Hornocker of thee fabulous Coyote Men!

DS: Can I call you Randy?

RH: You can call me Randy.

DS: Randy, could you give (for those who are not in the know) a brief history of Thee Fabulous Coyote Men?

RH: The Mighty Masked Marvels of Moron-o-phonic Mayhem have a long and un-illustrious past as thee first All Rockin' Lucha Libre Rock 'n' Roll Grapplin' Garage Punk Combo™ spanning some 20 odd years with the distinction of NEVER completing a single year without splitting up! Using my colossal cranium I deduce that if we base the career of the band purely on the time we have spent as an active concern, we have toured extensively throughout Europe/Canada/The US of A and released 5 albums and a baker's dozen of 45's all in the space of 3 months...'n' that's a scientific fact.

DS: Wow, that's pretty impressive! and of course you had a few releases on Estrus during their heyday - that must have been pretty exciting?

RH: Exciting? It was a dream come true... for Estrus!!! Mr. Mono Man the master of mullet Davey Crider flew himself to England with the sole purpose of gettin' his hands on the John Hancocks of myself, Randy "Captain Dyn-o-mite" Hornocker a.k.a. Thee Grand Poobah of the Electrical Geetar and Helmut "The Bruiser" Von Schoen, going as far as to threatened to burn down the Estrus empire if we didn't join the Bellingham big boys on his fine roster of rock. Dave treated Los Coyotes real nice and flew us out to the Garage Shock fest and arranged a U S of A tour, so Los Coyote Men repaid him by recording a tribute to Captain Crider in the form of our Dull City Records hit 45 'Mullet Man', what can i say, we've got a collective heart of gold.

DS: Indeed. I saw you play recently in Newcastle supporting King Salami & The Cumberland Three, that was a pretty wild night..

RH: Oh yeah Prince Saveloy and the Hot Dog Trio, that was the first time back in action for Los Fabulous Coyote Men 'n' the first with new bassonist "Slapsey" Maxie Rosenbloom II, so I mark that one an "A-" for rockability on behalf of Thee Sultans of The Squared Circle.

DS: And since you're playing at the Franklin Fest next weekend, what can the punters look forward to? Is this the first time in Scotland for Los Coyote Men?

RH: As you'll witness at the Franklin Fest, Debs, I can call you Debs can't I? Scotland was the first place to take Los Coyote Men to it's deep fried heart. In fact Edinburgh's swingin' spot The Cas Rock Club (R.I.P.) was the scene of the second Coyote Men show and the last appearance of "Slapsey" Maxie I. He shuffled off this mortal coil in a car park on the journey home from the show. Doctor's said they'd never seen a case like it and that he'd died of shame. I myself, Sir Randolph Hornocker, have had many a great time spreading the sports/rock entertainment live spectacle to Los Coyotes tartan horde and categorically deny the frankly absurd rumour that I was once thrown headfirst through two sets of doors into the street and banned from playing with Los Coyotes...lies damn lies!

DS: Okay, so a night of mayhem is pretty likely! I look forward to seeing your interactions with Franklin Rock ‘n’ Roll Club’s cartwheeling barmaid Brenda...

RH: Yeah word on the wire is Brenda's a live one! Scotland will be receiving the usual Coyote Men all out organised chaos no more no less as Thee Greatest Four Man Rock 'n' Roll Wrestlin' Combo only have two speeds 'n' thats "Goin' 'n' Gone"! We be sittin' on a mountain of top of the pops tunes so maybe there'll be a 12" headin' your way soon but 'til then there's a brand new 7" out on FOLC Records in Spain that's crazy limited to 250 copies in four different hand screen printed sleeves featuring individual shots of each fantastic member of Los Coyotes (Obviously there's an extra few copies of the one featurin' the ladies choice The Randster!). Hey, Deb are you sure you haven't kicked off your shoes? There's a funny smell about...

You can catch Randy and the phenominal Los Coyote Men on the Saturday evening of the Franklin Fest, details here. Further details of the band can be found here.

I caught up with drummer Eric Baconstrip (good grief!), from sizzling sausage 'n' roll garage goons King Salami & The Cumberland Three. Through the wonders of modern technology I ask such deep and meaningful questions such as 'has it really all gone a bit chicken oriental since last years appearance on BBC4's 'UK's Best Part-Time Band?'. We also take a wee trip down memory lane to the best garage club ever, and generally talk shop.

Eric: Debbie!! I just arrived I’m all ears or eyes.

D: You've been together as a band for 10 years, is that right? How did you meet and what have been the biggest changes over the years?

E: Yep we started in 2006, with this same line-up. I was in a punk rock band with Kamikaze UT the bass player before that, called CHINESE LUNGS, and when our singer Jasper left to go to live in Berlin to do a band with King Khan (the Black Jaspers), we thought "let's do a new band, some sixties garage Back from the Grave style!". My flatmate at the time T-Bone Sanchez said he played guitar so we went jamming on some old covers, and that's how it started.

D: Okay, so were you into garage beforehand, or was that a new discovery for you?

E: We had a few songs going and at some point we needed a singer, and I thought about this crazy guy that can dance great and dresses like Huggy Bear in Starsky & Hutch, I knew him from the Wild Weekend festival, so I thought let's try him, if he can sing a little bit that could work. We all always liked all sorts of music, but mainly punk! Sixties punk, seventies punk!

D: Aha! I was going to ask if you were a Frat Shack regular?

E: Ha ha! Debbie those were the days! I moved to London in '96, and I met Josh & Babz straight away, and started playing in a band with Josh, so we played a few Frat Shack parties ...

D: Interesting! What was the band called? I probably saw you play ...

E: Josh & Babz, who were doing the Frat Shack...as you know. It was a big mess, called first the Potato Heads, and later the Sidekicks. We even played in Scotland once. Drove all the way from London for one only gig in Aberdeen and back! 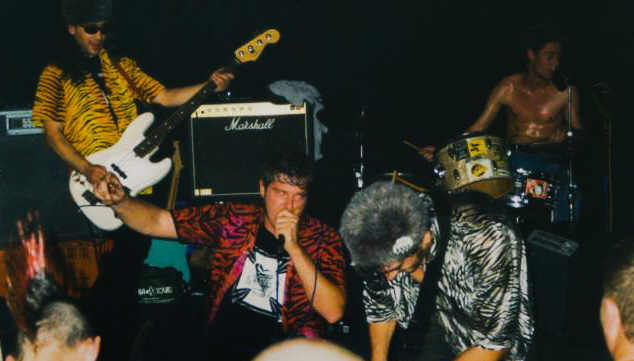 D: So how do you feel the 'scene' is faring these days? After the Frat Shack / Wild Weekend stopped there seemed to be a lull.

E: From my point of view, here in North London, I think things got quiet after the Frat Shack, but recently, since the last few years it looks like there are many more interesting bands and more venues/clubs.

D: How do you feel the reaction has been from your regular fan base since your appearance on TV (which I have to admit I haven't seen)?

E: Since the TV show, things have changed! My local fishmonger recognised me after seeing the show, he didn't know I was in the band, which he loved, so now I got free fish every now & then!

E: And it's great fish! And I love fish, so that's all good! And also, we have a few more people at the shows, but that is secondary.

D: Do you find that you're open to a wider audience now that you have an agent?

E: Oh, you know our secrets! This mysterious agent offered us to book a few UK shows after he saw the TV show. We never used anyone before, and we thought we would give it a go and see how it goes. So the tour started at the beginning of March and ends the 1st of April.

D: I did notice that the tour was mainly weekend dates.

E: And our problem is that we all have full time jobs, and only a few weekends available for gigs each month, and we have lots of offers in Europe, like Spain, Italy etc. so we are more tempted to take those ... no offence to the lovely UK people.

D: Which festivals  are you playing this year?

E: We have been booked for a few already. In the UK, I think only one so far, the Red Rooster festival, in Euston Hall. We have some in Canada in June,

one in Croatia end of June, the great Sjock festival in Belgium in July ...

D: Excellent, so is it safe to say that this has been your busiest year?

E: ... A few Spanish festivals in the July & August, and some in Switzerland and Portugal.

E: Ha ha ha!!! Actually it’s not really different this year, we are very lucky because we have been busy like that for years.

D: Are these all 'garage' type festivals?

E: Most of them, but not only. Some are eclectic festivals, which we really enjoy as opposed to play with similar type of bands all the time.

D: Yes, it must be a breath of fresh air I imagine!

E: We love garage festivals but it’s great to see something else

D: Yes exactly. So ... anything on the horizon recording wise?

D: Excellent. Is that on Dirty Water Records?

E: Yes, Dirty Water for Europe, Off The Hip in Australia, and Disk Union in Japan, and we started writing a few songs for the next album. But we will release an EP with Folc Records soon. Our new album is called Goin' Back To Wurstville, recorded at Gizzard studios in East London, produced by us and Ed Deegan, Gizzard's owner (and Holly Golightly's guitar player). Recorded and mixed over 4 weekends in mid 2016, mastered by Mike Mariconda (Crypt Records producer). 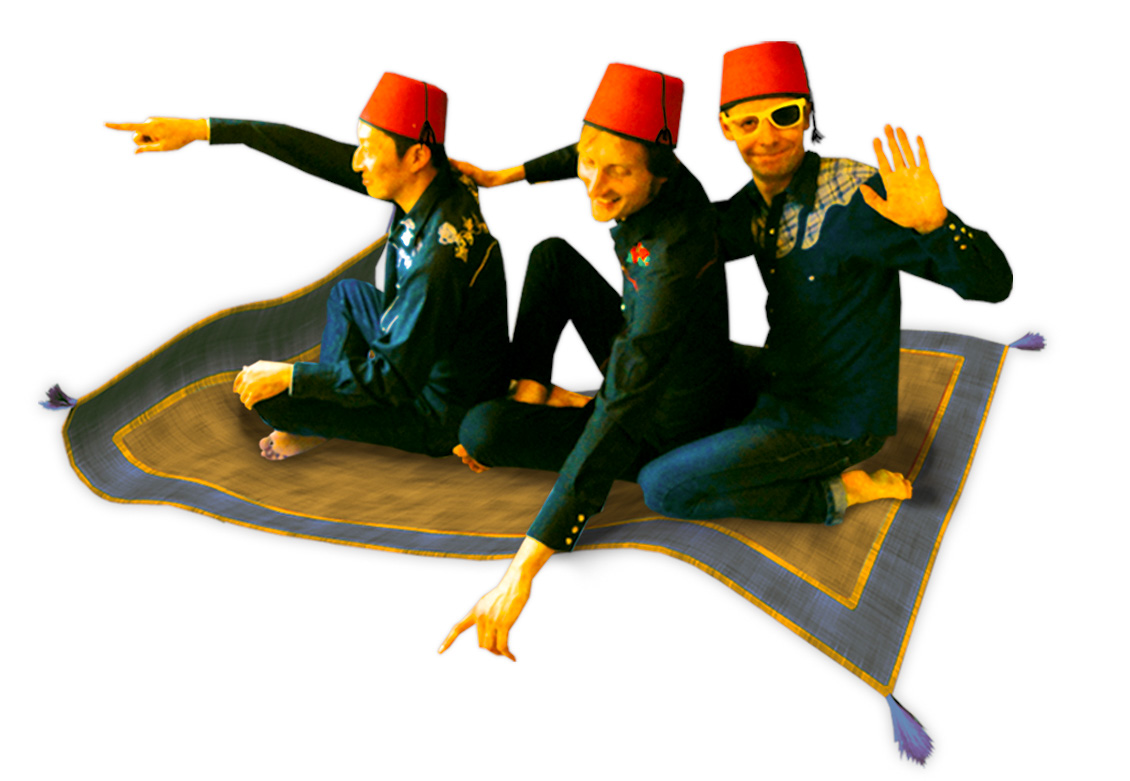 D: Impressive. Okay, final question, just for fun, if you could be in any band, past or present, who would it be?

E: That's a hard one Debbie, I would have liked to play in the Nipple Erectors back in the days and many other bands I guess.

D: As a drummer? or do you play other instruments?

D: Well who's being modest!

E: Peter Greenberg (The Lyres) plays on one song on our new album! The legend!!

D: Aah, doesn't he play with Barrence Whitfield these days?

E: Yep, that's him. I would have liked to play in the Lyres too then and The Fleshtones back in the day and The Cramps and 2 million times more ... but I'll stop here. Also Barrence Whitfield is a huge influence on us. I love the 1st two albums, and I wish I could have seen them at that time.

Merci, arigatou and huge thanks to Eric for taking the time out to chat with us. You can catch King Salami And The Cumberland Three tonight at the Think Tank in Newcastle, details here, supported by the no-less-than-legendary Los Coyote Men! An after sausage party will also take place just along the road, with (on a very tight) budget rockers The Moron-O-Phonics, high-class lo-fi girls in the garage Thee Girl Fridays and surfin' birds from outer-space (via Japan) The X Ray Cat Trio. Music 'till 3am, spun by the infamous Jim Spence. Details here.